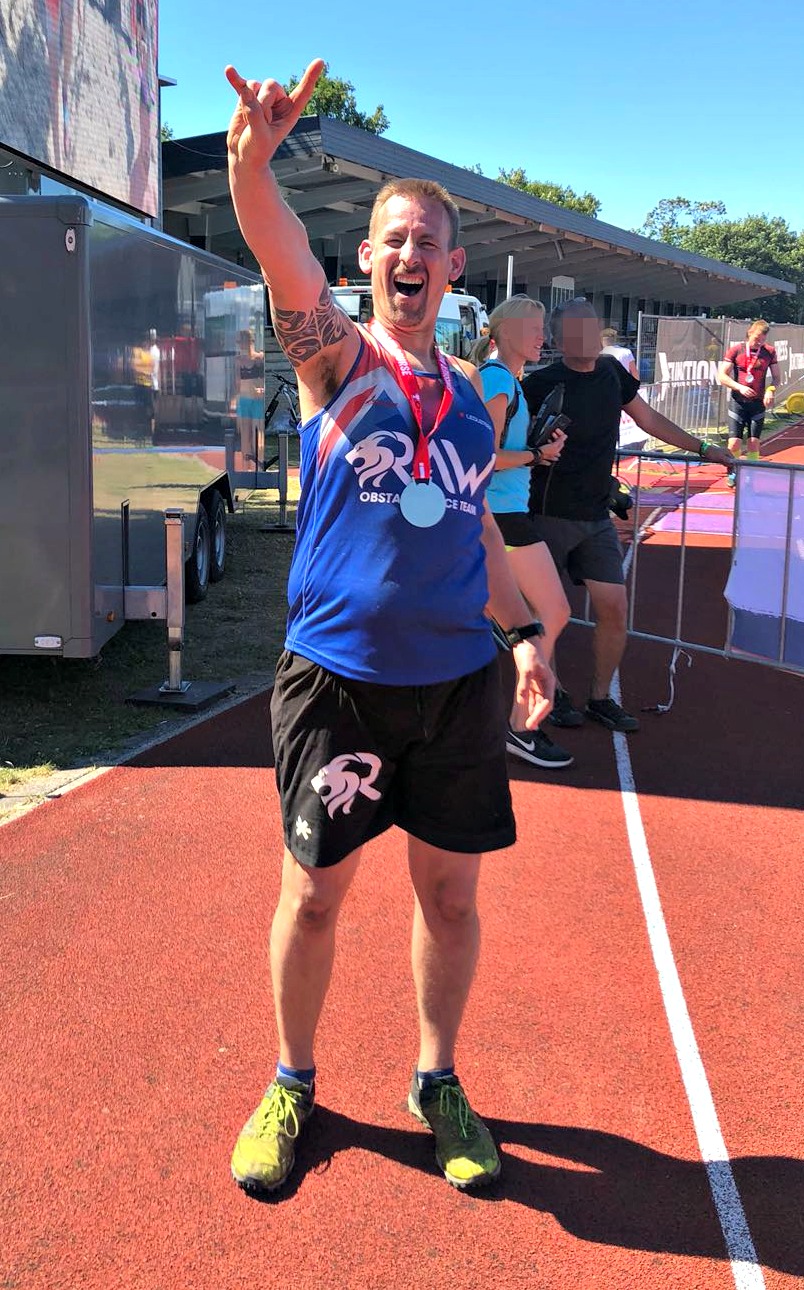 Regular readers of this column will know that last year I qualified to participate in the 2018 European OCR Championships at Muscle Acre Summer Madness. Non regular readers can just read the last sentence and will be more or less up to date. So, as with everything I do, something decent had to be accompanied with a ton of anxiety (I’m not fit, we’ve just had a kid, it’s a huge expense) and soul searching (is this what I want from my OCR?) which I’ve written about fairly extensively. Anyway, it was last weekend, I did end up going in the end (mainly as my cousin had bought flights to come and support me) and it was a pretty immense experience.

We landed in Denmark on Friday night and made a beeline for Esbjerg, which is about an hour away from Bilund airport. The championship runs across 3 days with Friday being a short sprint race, Saturday being the standard distance and Sunday being a team relay. I’d opted to do the standard distance only mainly due to cost and the fact that I’d used up my holiday time looking after our new family member. It turned out that was the right decision, the sprint course was, by all accounts, insanely hard with less than 10% of entrants completing all obstacles. I was shocked, given the calibre of athletes taking part, and also very scared. I’d seen some of the rigs and they were huge, in scale, difficulty and sheer inventiveness. I can say honestly, the course looked like nothing I have ever seen in all the races I have done in the UK. 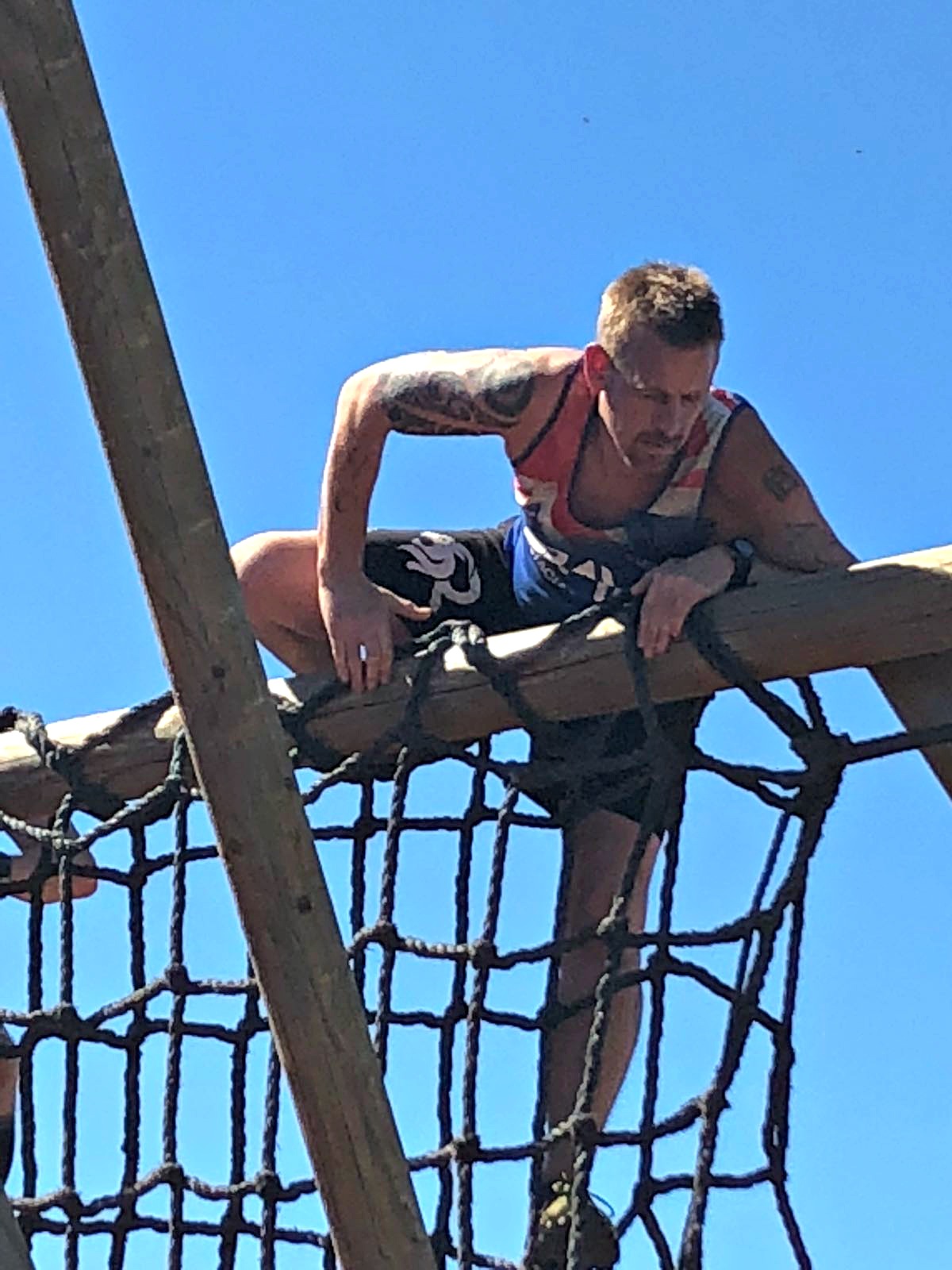 According to people I spoke to a lot of work was done over night on the rigs to make them more achievable. I think this was a smart move, the Euros is a top level competition and it has to be very hard, but it needs to be achievable by the high level athletes taking part. The way the championship works is that you have a wristband. Completion of all obstacles is mandatory, if you fail an obstacle you lose your band. The results are done on time with all those who finished ranked first, then those who Did Not Complete (i.e. lost a band) ranked below by time. I knew I would not keep my band but decided I would give everything my best shot. I never thought I’d compete at this level and, frankly, was happy just to be in the company of some of these athletes.

Come race day I was properly scared, the first obstacle was a 10 foot wall. I’m normally OK on these but I had a massive case of the fear. Earlier on in the day I had seen a team mate attempt the wall and not make it. This would have been fine, save for the MC focusing on her and attempting to encourage her over. I understand he was probably trying to help but to me, the thought of everyone’s attention being on me as I try to get over an obstacle is about the worst thing I can think of. As it happened, when my wave finally went, I did not make the wall on the first attempt. The irony was that I’m pretty sure I could have got over it but all I could think of was that I didn’t want everyone looking at me as I tried. At the first obstacle I handed over my band. Far from being an awful defeat, I actually felt this quiet liberating. I knew I’d lose my band sooner or later and the net effect was that the pressure was off and I was free to enjoy the rest of the run. 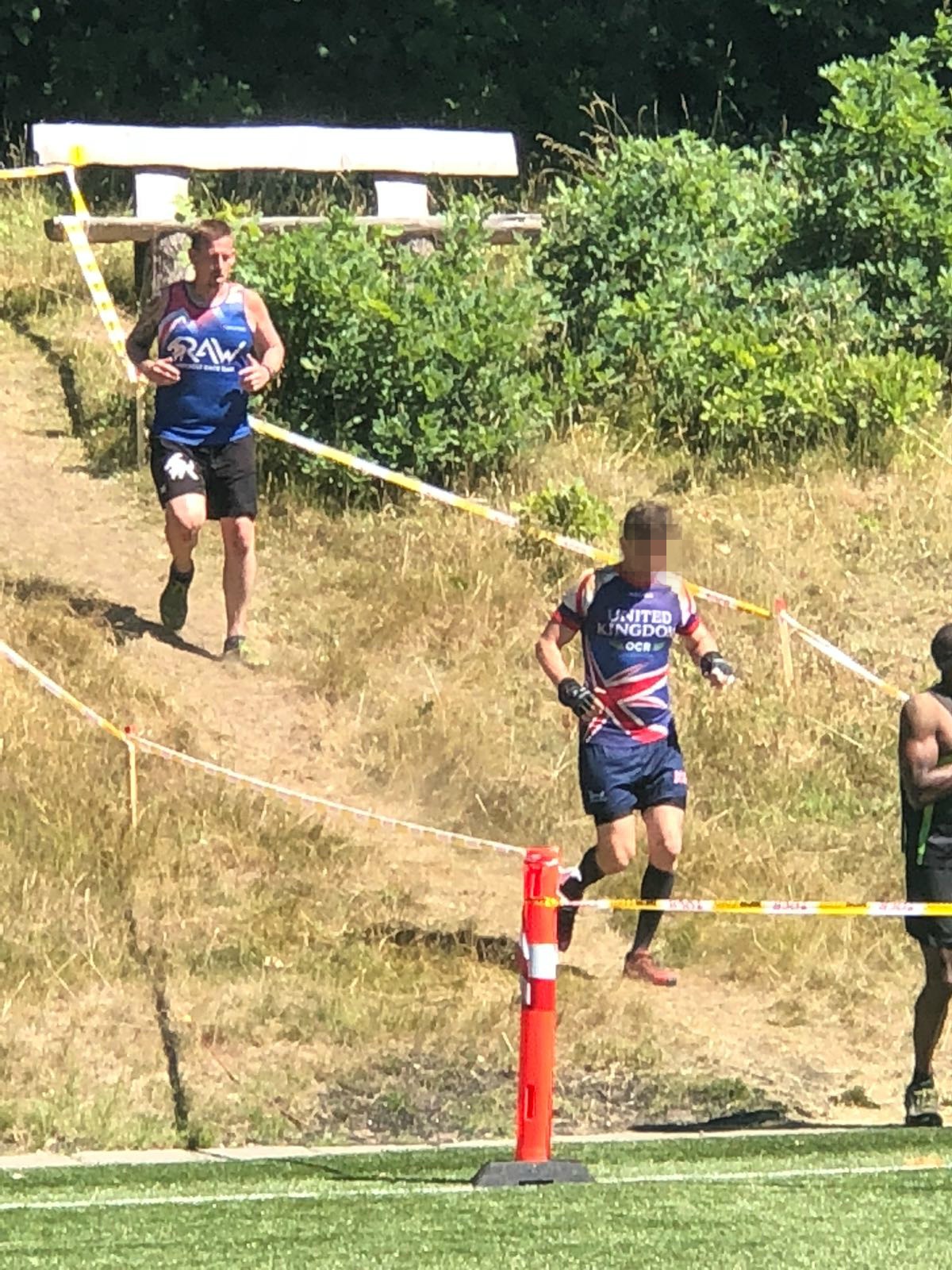 I pushed on through the race, trying and achieving some obstacles I would never have thought possible and keeping good speed despite the killer temperature. Even in factor 50 I managed to pick up a tan as I ran, it was probably the hottest race I have ever done, barring the Spartan Super I did in the US.

The running sections of the race weren’t bad, some forested areas were quite pleasant, the rest of the runs more designed to connect obstacle locations than provide any real entertainment. There was a particularly fun running section in the last third of the course with many logs to jump over, which was a hoot. As Esbjerg is coastal there was even a section on the beach which was utterly hellish in terms of leg sapping sandiness. 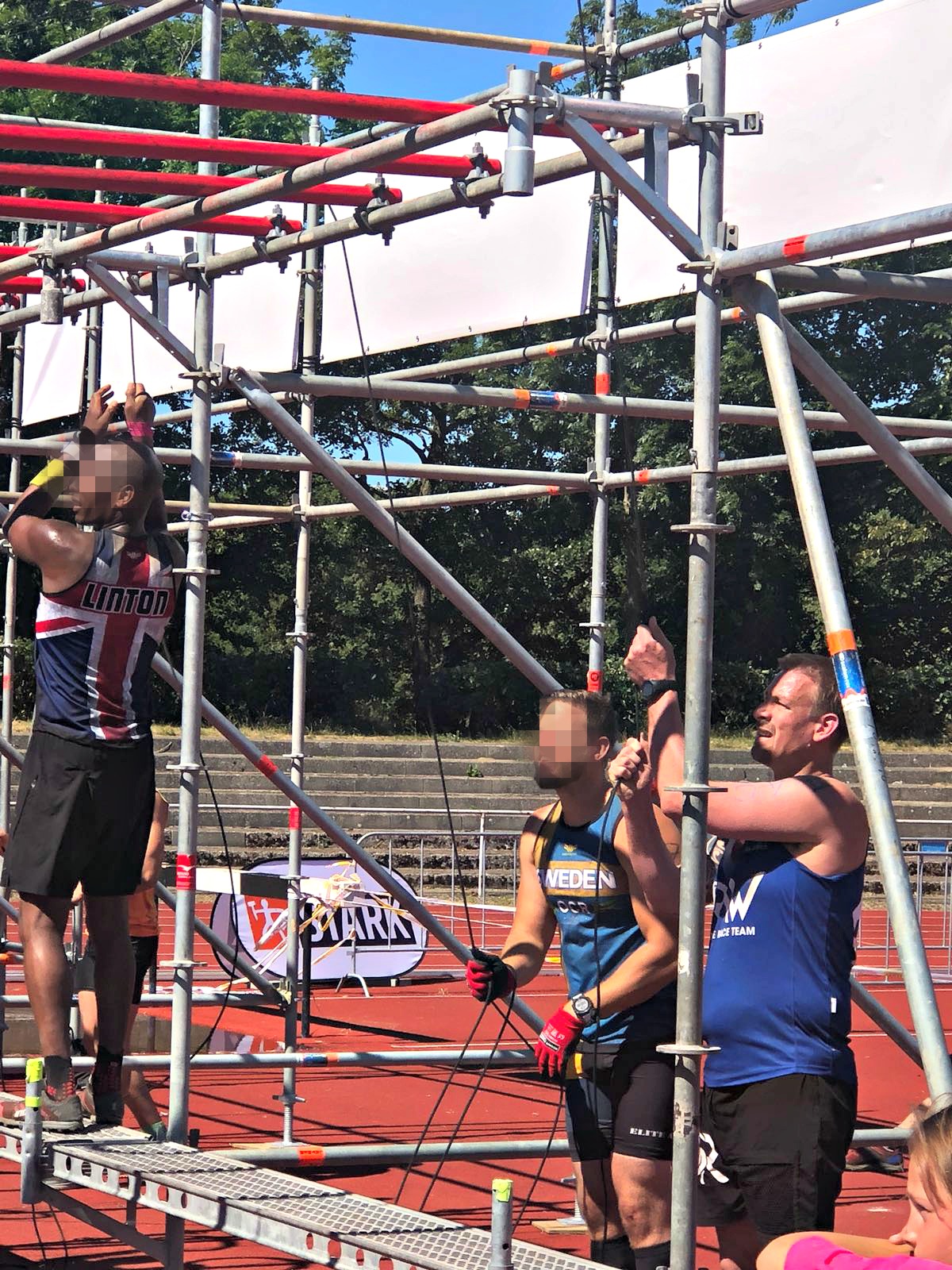 Still, it was fun. I won’t describe the obstacles as it’s going to have no relevance to all but the most committed OCR runner (and they have probably seen pics already as there aren’t too many of us and most of us are friends on Facebook) but it was next level stuff. I don’t even know where I would go to train for that kind of thing in the UK, but maybe I’ll find out. Definitely I need to get some bouldering practise, there’s a massive element of finger, core and upper body strength that I need to develop to get competant on these rigs. Yes, I think in preference I do prefer the ‘English’ approach (more mud, more cold, fewer rigs) but on balance, being amongst the company of such good athletes and getting to race in a race that was so tough did also have a certain attraction. I’ve no idea if I will ever qualify for the European Championships again, I can’t help feeling like it was a bit of a fluke but I am going to try and shift my training so I do better on more technical obstacles such as rigs and flying monkeys. There are courses, such as Nuclear Races that are more rig heavy and so I’ll see if I can do a few more of those to improve those skills. 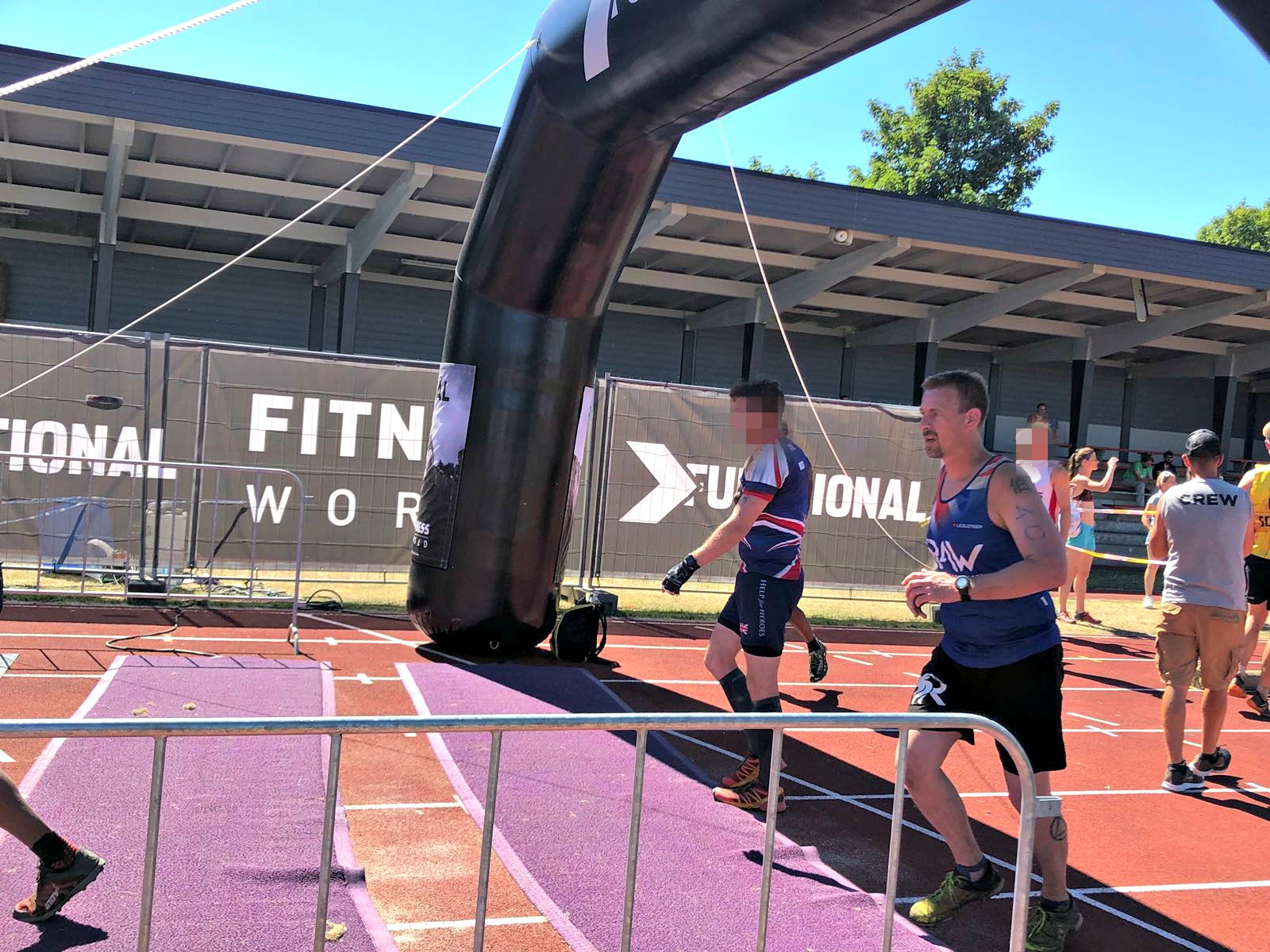 So, in conclusion, it was tough, tougher than I could imagine but I couldn’t get over how awesome it was to just be there. When I was at school and perennially the last one picked for any sports team, I could never have dreamed that one day I’d represent my country and I still can’t quite believe that I did. Rather than feeling demotivated at the level of competition, it’s made me feel determined to keep pushing my training and to incorporate more strength training into my regime. I will get better and so who knows what the future will hold.