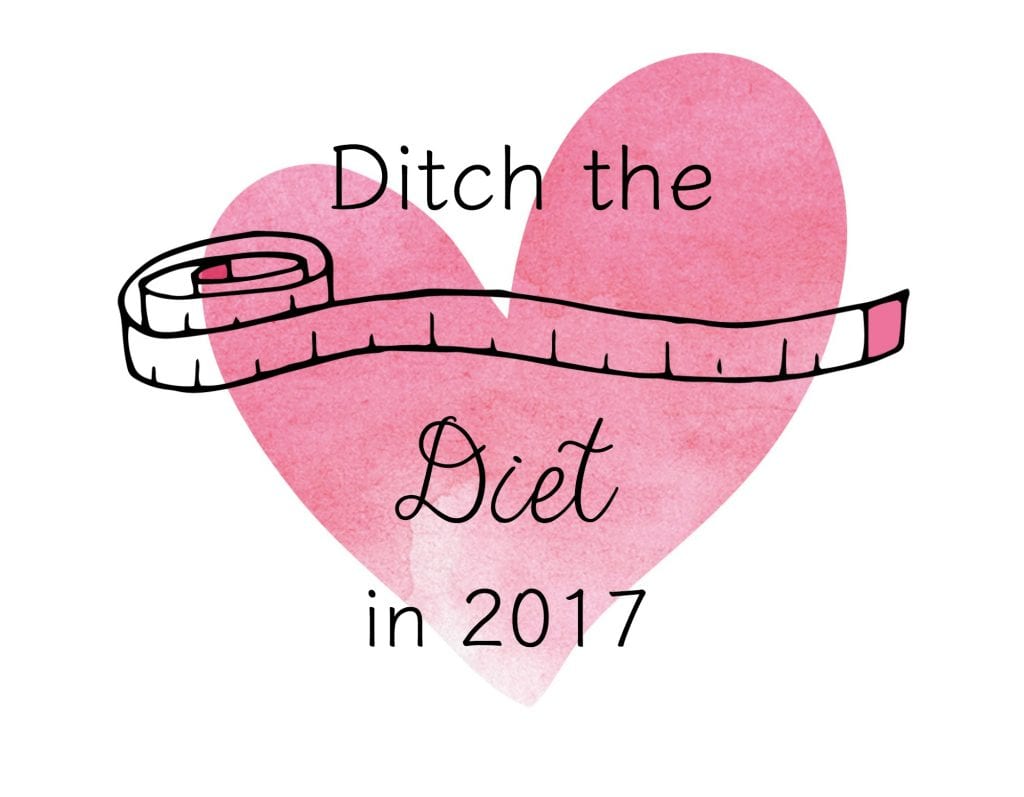 It’s the first of January, we are surrounded by new year’s resolutions, diet adverts, gym membership discounts and even my local supermarket has a section dedicated to workout clothes and fitness DVDs. I imagine about 70% of the population are about to embark on a diet or similar. So I’m going to suggest something different. Maybe a bit out there. How about you try ditching the diet in 2017? Make a vow not to go on a diet?

I’m not talking about not improving yourself, not trying to get fitter or not eating healthy. Just not dieting.

Why I Did It

In September, I made a big change in my life, I stopped dieting. I have been on and off a diet since I was about sixteen. Twenty years of dieting on and off and here I am a dress size 16/18 I think it’s pretty fair to say it wasn’t working. Oh, the diets worked, if you stick to them they usually do, but the weight never stayed off long term. I was at a very low point mentally, my food habits had gotten seriously unhealthy and unbalanced, veering from overeating and bingeing or under-eating and heavily restricting. My self esteem was through the floor and suddenly I just couldn’t take it anymore. I was quite simply miserable on a merry go-round of dieting that I couldn’t seem to get off. I made a change. It was the best thing I have done in a long time.

It’s not a revolution, in that time I have lost 9lbs. But when I started at this point my goal in September was to just maintain my weight and stop yo-yoing. I actually cannot remember a point where I managed to maintain my weight, so to me this was as a starting point very important.

I refocused my relationship with food and now I want to invite you to join in with me too. Each month I will be sharing a challenge for you to join me on around healthy eating habits, but also mental well being. One of my goals for 2017 is also to start vlogging, so over the next couple of weeks I will also do my first Youtube video for you on this subject.

Most of these things will be things you have read before. But if you were like me they were things I had never really if I was honest sat down and actually did. So start by making these small changes right now. Nothing is banned, no expensive fees or memberships and each month I will be back with a new challenge to add to the list.

Only Eat When You’re Hungry

It sounds simple and obvious right? Actually at first for me it wasn’t. I was used to associating being hungry with good as it meant I was losing weight, but if you’re hungry your body is trying to tell you something. I also used to carry on eating even when I wasn’t hungry, which if you think about it is kind of (totally) bonkers. So I now in general stick to 3 meals and one snack a day, two snacks if I’m hungry. If I’m not hungry no snacks. If I had a huge meal, like on Christmas day – I have just two meals that day as I was still so full.

Don’t cut them out, life’s for living. But a treat is just that a treat. Which means you’re not meant to have them everyday. Plan your treat days, enjoy them, cut them out on the other days. I bet you you will enjoy them more when you do actually have them.

Something like biscuits with your tea everyday isn’t such a good idea. But if you’re finding it hard to cut them out maybe you start to committing to have just one a day instead of three, or every other day. This is your choice, your life, just commit to making a small change.

Food is fuel, but it doesn’t have to be miserable either. We’re meant to enjoy our food, we’re meant to enjoy our lives. We’re just not supposed to over eat. So simply make sure you’re eating fruit and veg, if you’re too full after a meal, make a mental note. After each meal review what you’ve eaten could it have been better, could you have eaten less? Ok, so you know for next time. Change it for your next meal.

The emails, the Facebook updates, the tweets with the wonder diets, the slimming teas, the diet pills whatever has started to seduce you. Delete them, unsubscribe for them and in January make your online space diet free.

Be Kind to Yourself and Tell Me About It

Let’s be frank, you’re going to make mistakes. There are still some nights I sit there and think I ate too much. Learning to balance the food in your life isn’t that easy if you’re used to just relying on diets, or have got into the habit of overeating. It’s one I’m still learning too, so take it a day at a time and keep on learning.

This going to be a monthly challenge, it’s also going to be an evolving one. It’s one I really hope other people will join in with too. If you’re struggling, have questions, have an issue you want me to address next time, then tell me about it. Please email, tweet or contact me on Facebook. Write your own blog posts to update me on it, when I’ve got my Youtube channel up and running I would love to hear from you on there also.