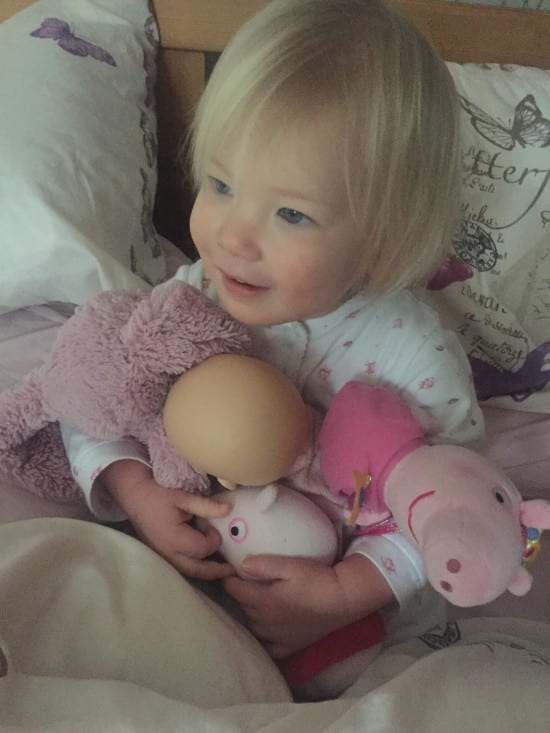 My Daughter, Sleep Deprivation and When It’s Time To Ask For Help

If you follow me on Twitter, or are a regular reader of my blog you will know that sleep, or the lack of it is an over-riding theme of my life at the moment. I actually think that sleep deprivation might be my kryptonite, but I can certainly see why it is used as a torture device.

My daughter has never been a good sleeper, from her entry into this world she was born screaming and my husband and I rapidly fell into a blur of 3 hours per night sleep. Not her fault of course, diagnosed with cow’s milk protein allergy and silent reflux at 5 weeks old, she was in pain and couldn’t settle.

When she was small and her reflux was bad sometimes the only way I could settle her from screaming was to breastfeed her. Which eventually led her to a cycle where she would only sleep if I breastfed her. If she woke in the night I would have to nurse her to sleep or she would just cry and cry. I tried lots of things to change this. I even tried to convert Aria from breast to bottle nothing worked. I was up every 1 to 2 hours per night. One day I thought I was losing my sanity and parked up in the car park in Tescos I sat and cried because I was so exhausted.

Through hard work and some advice from The Blissful Baby Expert who very kindly contacted me on Twitter and emailed me advice. I managed and it wasn’t easy to wean Aria off breastfeeding to sleep. I then eventually moved her to cup when I decided it was time to stop breastfeeding. That wasn’t easy either, but probably another story!

But until 3 weeks ago, Aria was still waking every night at least for a milk feed. She’s quite slim, she’s dairy free, and when I talked it over with her dietitian as her diet isn’t very fat rich we debated whether she might still need it. And, to be honest, as she woke drunk it and went back to sleep straight away I kind of was ok with that as it wasn’t depleting my sleep too much. But I was also wondering at 21 months, if she still honestly needed a milk feed and I just couldn’t come up with an answer. In fact, I actually wrote about this in October – My Daughter Still Doesn’t Sleep Through The Night – Is It Time To Change Things? I had initially forgotten about this blog post, and reading my words back I realise that in 5 months nothing has changed really. It’s not unusual for Aria to still wake for a good two hours in the night and there are days when I wonder if it’s getting worse.

Then, about 3 weeks ago, for various reasons I decided to try cut out Aria’s milk in the night. I started by offering her water instead and trying to settle her from there. I’ll be upfront and honest with you it hasn’t been fun. The first few nights she ended up in our bed, there were lots of tears. I did notice she increased her food in the day after the first night and now she has to have two good snacks in the day as well as three solid meals. When I offered her water instead of milk at first she would drink the water. After a couple of days she would refuse the water and want nothing more than for me to hold her.

I was in a quandary, should I reintroduce the milk again. Just as I was beginning to really fret, she slept through for two nights straight – I began to wonder if I had cracked it. Then came one of the worse nights ever with Aria crying inconsolably for 3 hours, I tried calpol and nothing seemed to work. We then fell into a pattern of hellish nights and then she would sleep through and repeat. It really reminded me of her newborn days. I attempted cutting out her nap in the day, but with the lack of sleep in the night she was ratty and tired it didn’t work, so then I tried a nap every other day. Which is what we’re currently doing. I’m still not convinced this is working!  She seems to get really ratty and weepy on the days without a nap.

I have recently begun to wonder if there was more to her sleep problems, she hasn’t been on reflux medication for well over a year. But perhaps the milk was helping appease some reflux in the night, and by cutting it out I have taken away something that was helping her?

Then, throw in a stomach bug into the house, my husband away for most of the month with work, and any sleep I was getting and I was averaging about 4 or 5 hours a night all in all disappeared. I wouldn’t even say I am a weepy person, but one morning in utter exhaustion of it all I found myself crying because I was so tired once more. I was also (am still) worried I was just doing it all wrong. Was I missing something?

On my sister’s advice I decided to call my health visitor for help. I have to admit I am really skeptical of health visitors I haven’t always had the best experience, but the lady was really sympathetic and helpful. Then she said she would refer me to a sleep specialist. I didn’t even know the NHS had sleep specialists for children?

Today, I had my first call with the sleep specialist. She doesn’t think I did the wrong thing about cutting out the milk, she gave me a sympathetic ear and lots of advice. Also told me to put Aria’s nap back in, which in my gut feels right, but we’ll see. We’ve set an appointment for a home visit and in the interim I am to keep a sleep diary and keep on with what I have been doing. We talked about what could be wrong with Aria, from night terrors to her reflux. I don’t think either of us know the answer yet. But I am grateful to have help and that there might be a way to do the right thing.

As I finish writing this, I’m not even sure this is a great blog post and more a stream of consciousness as I try to get my thoughts about it all in writing. Yes, I might be exhausted, but it can’t be good for Aria to be up and crying so often in the night. I worry that it might be psychologically damaging her somehow to be crying so much, and what if there is something medically underlying we’ve missed? I guess only time will tell. Watch this space and wish us luck! And if you’ve made it to the end thanks for reading all the way through my ramble!

22 thoughts on “My Daughter, Sleep Deprivation and When It’s Time To Ask For Help”