Trying the Milk Ladder with My Daughter for the First Time 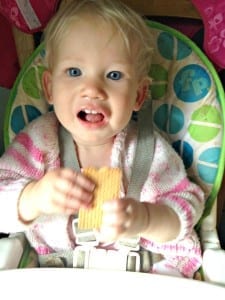 If you’re a regular reader of my blog or follow me on Twitter, you will probably know that my daughter has cow’s milk protein allergy (you can read more about her diagnosis here). Since she was just a few weeks old she has been on a dairy free diet and the difference to her health and well-being because of it has been significant.

As she turned one, and following discussions with her Dietitian we had planned to start her on the milk ladder. If you haven’t heard of the milk ladder, it is a ladder to slowly reintroduce milk back into someone’s diet in a measured way to see if they react. You start with a malted milk biscuit that just has milk or whey powder in and build up slowly to items with just actual milk, butter and cream in.

Before we started Aria on the ladder, I’ll admit to feeling pretty apprehensive. It’s a strange thing knowing that something you are doing for a child’s own good may ending making them poorly. But also, I so wanted her to succeed. At 14 months, she is much more aware of the foods everyone else is eating and wants that same as her brother has. We bought ice creams on holiday without realising and she got upset that she couldn’t have some too.

Aria’s reaction to milk is gut and skin, which means it upsets her stomach and gives her gastric pain as well as causes her to break out in a rash and eczema too. But it has been such a long time since she has eaten or drunk cow’s milk – she was literally weeks old, I had no idea what to expect really.

As soon as we started we immediately noticed a flare with her eczema. The very night we introduced the milk she had a rash on her neck. But I decided to continue as there seemed to be no problems with her stomach. My logic being if it was just her eczema I could keep her dairy free day to day but allow her the odd treat and just manage her eczema.

We progressed up to step 6 of the ladder, with each step I noticed eczema flares or a rash. If I’m honest I think I have been a bit in denial. I so wanted her to succeed. But by step 6 the symptoms became apparent that her body wasn’t tolerating the milk. She had a rash and eczema all over her back, which had also started to spread to the front of her torso. The next day she was off her food, windy and very unsettled in the evening, the day after she was constipated. It took 5 days for the rash to go. Even now I am wondering if the unsettled-ness was down to teeth, it is so hard when they cannot tell you what is wrong. But it all seems a bit coincidental.

For the moment, I have decided to take Aria off the milk ladder entirely. I am pretty sure she is not ready. We have a Dietitian appointment in a week’s time so I will discuss next steps with her.

I feel sad that she reacted. Who doesn’t want normality for their child? Most children outgrow their milk allergy by the time they are five. So there is still plenty of time. But for now we remain dairy free.

14 thoughts on “Our First Attempt at the Milk Ladder”