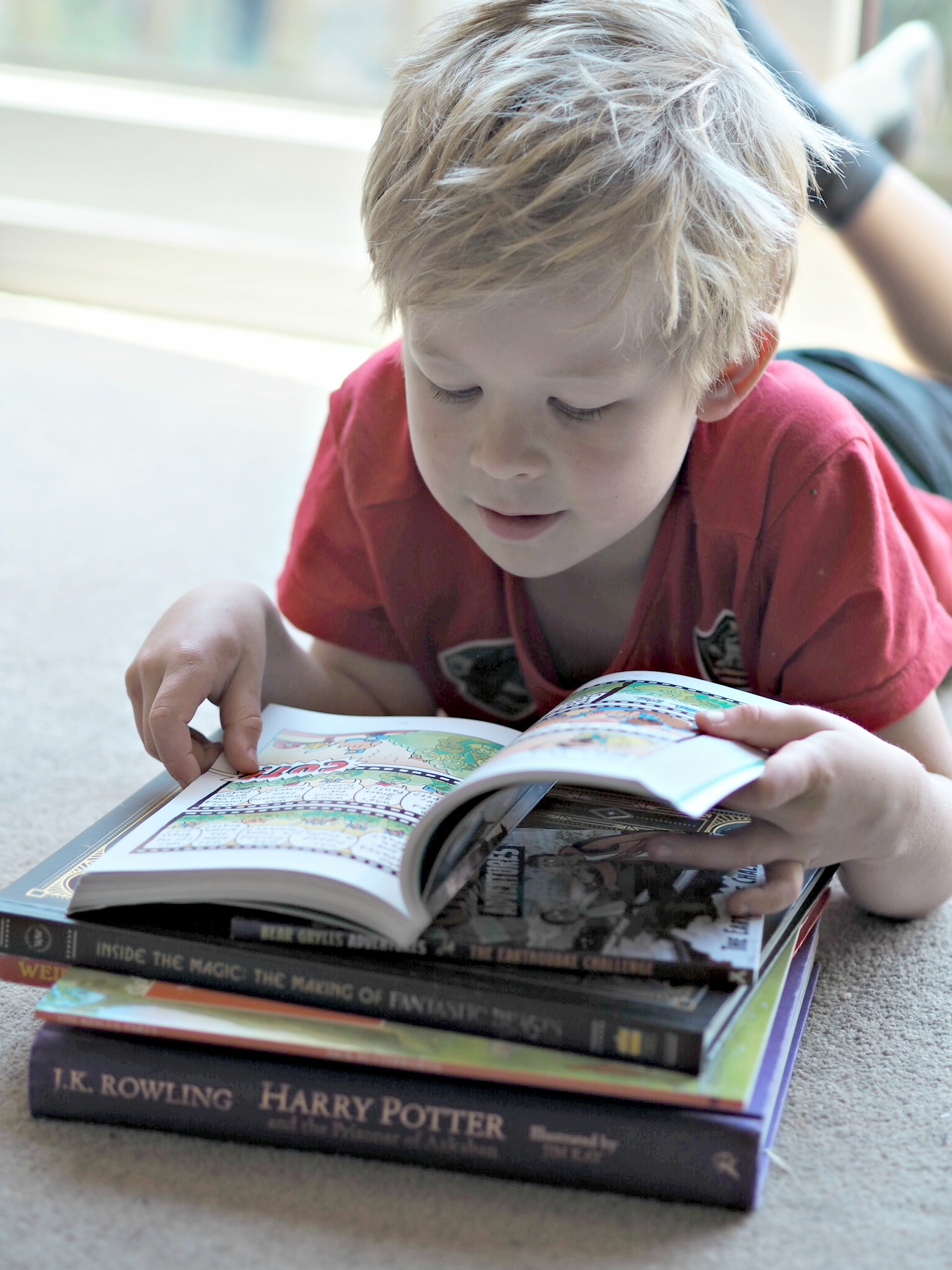 I’ve been debating writing this post for a little while now. But I have felt a little nervous about it. Like it’s ok to talk about if your child is behind, but not so much if they are ahead. As I don’t want to look like I am bragging, while I am indeed proud, having a child who is ahead comes with its own challenges.

It’s hard to describe Logan, he’s a very passionate child who gets very into things. When a subject captures his interest, he gets really into it and researches and learns about it as much as he can and it can be all he talks about. He also has a memory like you wouldn’t believe. I’m not talking a good memory, I mean he remembers EVERYTHING. At his parent’s evening the other week even his teacher commented she have never known a child like it. I never have to practise his weekly spellings with him, he just knows them. There are the odd occasion when he doesn’t get all of them right, but most weeks he gets full marks. He’s quirky and sensitive and passionate and obsessive. He loves with his whole heart, his listening can be so bad I occasionally wonder if his ears are broken and he cries if you break the head off a chocolate bunny. He loves to learn and thrives on challenges. He hates to be bored, feed his imagination and he’ll run away excitedly his mind full of ideas, concepts and inventions.

Before he started school I didn’t really do anything at home with him in regards to reading and writing, I figured there was time aplenty for that when he started. When he did eventually start he took to reading like a duck to water, at first I just thought it was because he was one of the oldest in his year group which gave him a bit of an advantage. But by the end of reception he was on purple books which most children are expected to hit in term two of year two.

As Logan progressed into year one, we began to encounter a few issues. His listening, never one of his fortes seemed to deteriorate. His class had a traffic light chart for behaviour and there would be days where I would come to pick him up to find out he was near the bottom. Mucking around and not paying attention.

It wasn’t until a little way into the year that we began to clock that he needed more of a challenge and one of his teachers tried a different approach with him. Realising that he was acting out because he was bored and setting little challenges and rewards for him, which helped massively.

During this time I also noticed that he was getting read to a lot less frequently in school. I understand it, resources are so tight in schools at the moment and if you have a child who is ahead and you have government targets to meet, you are going to focus on the child who is behind instead. But it doesn’t mean that that is not frustrating and it got to the stage as I read with my children most days I was suggesting it was time for him to move up as the teacher hasn’t managed to read with him for several weeks. At the end of year two he finished a free reader.

Entering into year two a new reading system was implemented in school, where all children are now on a reading level and free reading was taken away. Logan was put back onto Lime books, a level he had been on 6 months previously and the books were just too easy he could read them in 5 minutes flat.

The start of year two also brought with it some behavioural problems that really worried me. We saw him hitting himself, real extremes of emotion, throwing things and anxiety. It was combined with my husband starting a new job where he travelled too, but I just didn’t know what to do and wondered if he needed to see a professional.

It was at this point I went in to see his teacher, I also asked for an appointment with the teacher who looks after SEN. In preparation I decided to pay for an online IQ test for Logan, this was just an online test and children should really be evaluated by a professional, but that costs in the region of £700, so it wasn’t really an option. The test showed he had a very high IQ. So my argument was that he is a special need child, just different from the traditional special needs encountered. Gifted programmes have been scrapped by the government, so the school didn’t have anything in place. But they did say that they would help.

After the meeting, Logan was assessed my the Head of Phonics, he was put up to a higher level of books and set new targets for reading. I discussed with SENCO the option of moving him up to maths lessons in other years if required and ensuring he has stretch activities in his own class. But at this time it was decided that he didn’t need to be under SENCO’s care.

Since then he has definitely settled down more in school. We haven’t had extremes of emotion. His reading is still crazy. Over Easter alone he read 29 books. I’m not talking Biff, Chip and Kipp here. I’m talking proper chapter books. His thirst for books is pretty insatiable. The task right now is to find him books that are a challenge but the content is appropriate. I often find myself googling titles to check its age suitability. For example I’ve let him read the first three Harry Potter books, but worry the content is too old for him after then. At present, he’s 7 years old and reading books aimed at 9-11 year olds.

He’s moved up another reading level, no-one else in his year is at this level. We still don’t need to practise spellings. We had maths homework recently where it was to teach children to add double figures, using number lines, adding ones and then tens. Logan could add the numbers up straight away in his head, so I switched things up, giving him three double numbers and four to add up instead.

Building a relationship with his teacher has helped massively. I really feel like she understands Logan a lot more now. At the last parent’s evening we talked about how she could help with his reading, allocating him more books at the next level the school’s online reading system. He’s ahead in every single subject, except handwriting which comes as no surprise! I also feel for his teacher as she has had no TA for most of the year due to illness. Logan hasn’t been taken out or up to other years for maths like discussed, but maybe he doesn’t need it, I’ve left this in her hands for the moment. He’s still not being read with very frequently, this does make him cross as he would happily change his book everyday and would love to read daily like others in his class. But I have solved this problem by getting him new exciting and challenging books to read at home.

I’m not a fan of SATS in the slightest, I think they should be abolished. But, I am intrigued a little to see what his results are to be honest. We were sent test papers home and the only reason we did them was because Logan wanted to, his biggest issue is rushing ahead and not reading the questions properly. But the ones he did at home, he got them all right. So far this week, he’s told me how fun the quizzes have been.

When I sit down and think about things, I wonder if I am over worrying things here. He’s not a genius, I know this. Maybe things will even out as he gets older and his peers catch up? I’m certainly not a tiger Mum and have written before how I hate homework so I don’t want to be giving him extra activities at home – children need to to play and well, be children. He’s my oldest so this is new territory for me and I don’t really know what children should or shouldn’t be doing at this age. But I can’t let go of the fact that there is something different about Logan. His behaviour at the beginning of the year was so worrying and it’s such a relief that things have settled down. He does often struggle with change and transitions, but in fairness this is something I struggle with myself.

I worry that he is being under-potentialised, that as his parent I am his voice in this world and should I be demanding the school gives him more support? When budgets are stretched it will be easily to let a child who is doing very well just keep ticking over. I do know his reading his off the charts as is his passion for books. I don’t think your average 7 year old will read 29 books over the Easter holidays. I really don’t know if I should be pushing or letting things lie. Is it worth me getting him officially tested for giftedness, will it actually achieve anything? As he seems more content now, so I haven’t pushed things.

More than anything I just want him to be happy. This parenting thing is hard isn’t it?

8 thoughts on “When You Suspect Your Child Might be Gifted”