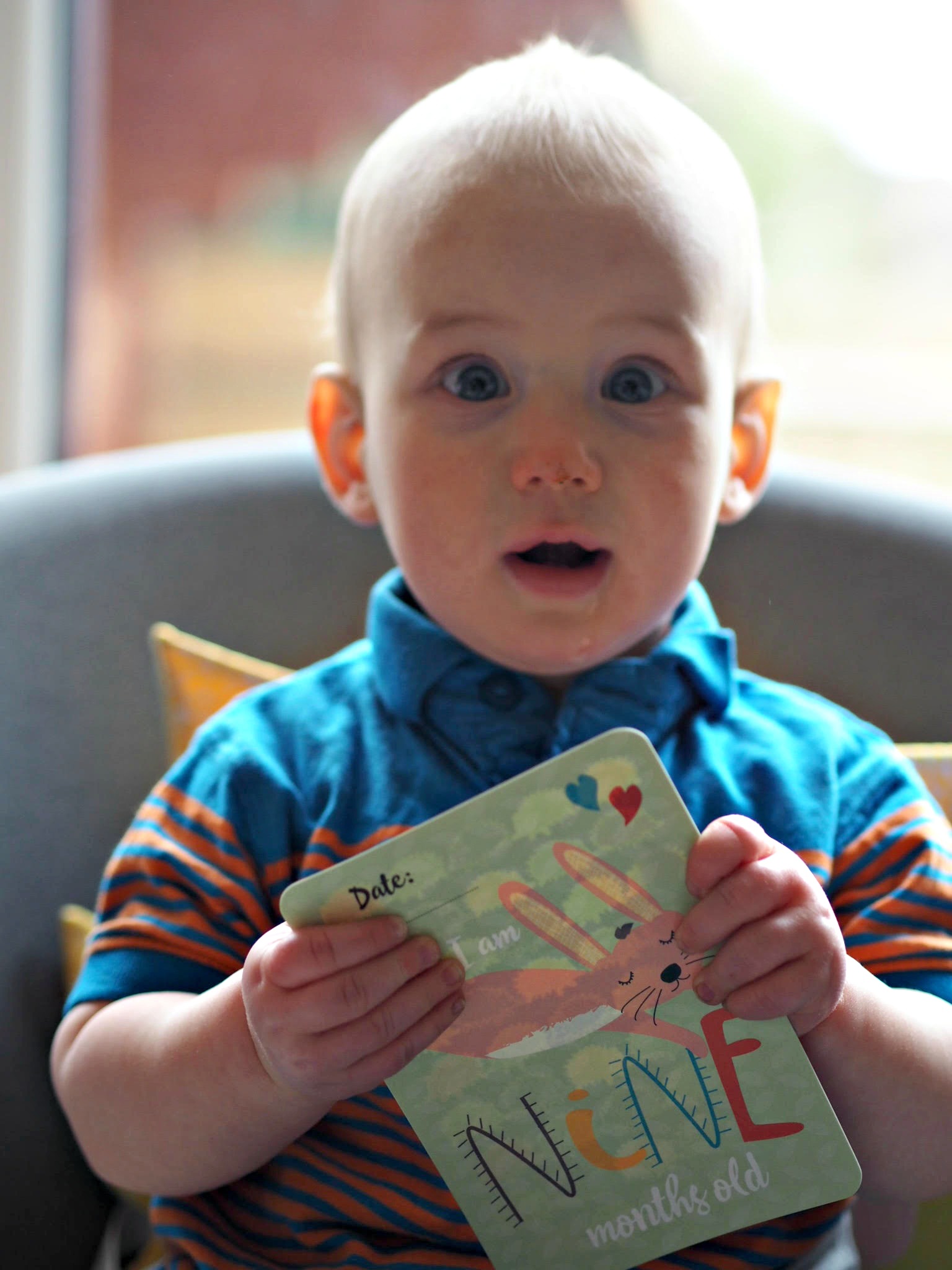 Ahh my little man is getting ever closer to one year’s old now, I’m not ready for him to be a toddler yet! With him being my last, I want to hold onto to the last of these baby days with both of my hands. But he definitely has other ideas. As suspected he has very much progressed with his crawling this month. He’s not fully up on his knees yet, he’s at the commando/zombie crawl phase. But he is also surprisingly fast! The little sucker gets into everything and can spot a hidden wire at over 100 hundred paces. It’s certainly a learning curve for his older siblings who are quickly discovering the need to put their things away more effectively. Lego and the little bits from LOL dolls are now banned from downstairs (except on the dining table) and to be kept in their bedrooms only.

He’s pretty much got the sitting thing down, he’s still a little wobbly and he loves moving about so much that he often wants to go straight onto his front to crawl about. And these last few days he’s also started pulling himself up onto his knees too.

In terms of teeth, tooth number 4 is coming down and I think there are signs of tooth number 5 too. He’s certainly rather drooly. He’s had another cold this month, they really do seem to be a monthly occurrence at the moment which made him a bit rotten and gave him a mild temperature in half term, but other than that he has been well.

We’re still breastfeeding, but I have dropped the afternoon feed and replaced it with a snack and a drink instead. So Bo is now breastfeeding after breakfast, after lunch and evening, then has a bottle at our bedtime with his Dad. As well as 3 meals per day and an afternoon snack as mentioned above. Sometimes a morning snack, but as he has a big breakfast he doesn’t always want one. He also still naps twice a day – a short nap in the morning and a bigger nap after lunch.

His words are coming along and he really is vocal. We’ve got ‘Bo, Bo, Bo, Bo’ – ‘Ba, Ba, Ba Ba’ – Mmmm Ma’ ‘Do Do Do’ and ‘Da Da Da’. I have also been trying to get him to learn how to do high fives and clap. He actually loves watching people clap.

Just this week he came on an adventure with me to London, to Westminster to the Government office of Gender Equality, which I will be writing more about at the end of the week. But that will be something he can say when he is older that as a baby he was part of some important discussions on gender equality. I hope it is something all of my children will be advocates of.

That’s it for this month, I would put money Bo will be up on his knees and crawling properly next month and I will have been busy installing baby gates!