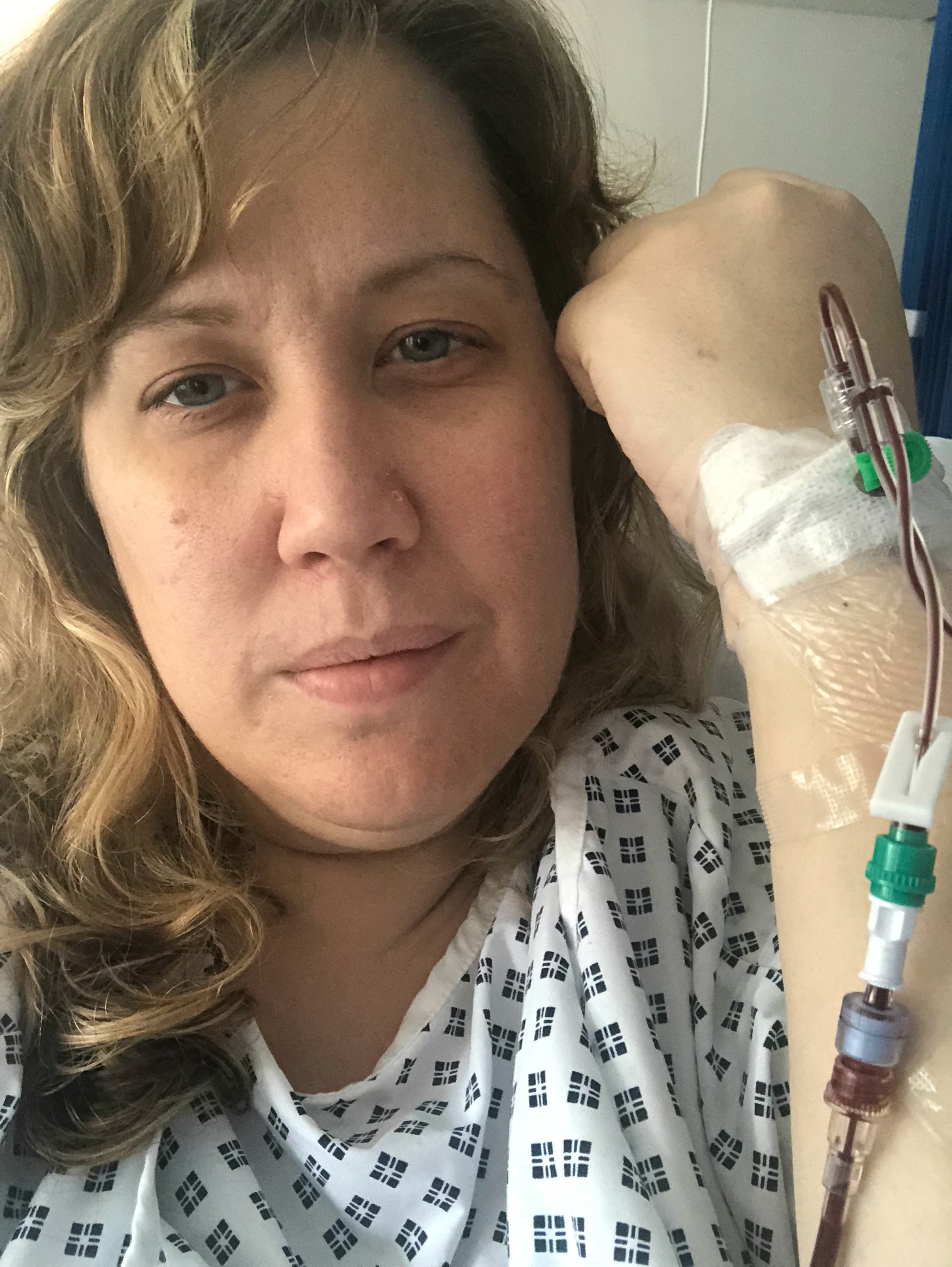 Last week I told you all about Bo’s birth and despite my nerves and a very difficult epidural the birth and c-section went really well and I was home the next day. I was sore as it was my third c-section, but starting to slowly get into a routine and recovering.

Unfortunately, things didn’t quite go to plan. A week after Bo’s birth I started getting headaches and originally put it down to dehydration as the weather was warm and I was breastfeeding. However, on the Wednesday, 9 days after Bodhi was born I woke up with the most horrendous headache and could barely lift my head up off the bed. My husband, still on paternity leave took Logan to school and then came home and called the hospital as he was worried and they asked him to bring me in.

Because I had problems with my epidural the original belief was that I had a post dural headache. Which is a headache caused by the epidural puncturing the bag of fluid that surrounds the spine. I was also incredibly dizzy and could barely walk without wanting to throw up.

A consultant anaesthetist examined me but didn’t believe it to be a post dural headache as all of the symptoms were not adding up to her. But everyone was concerned about the headaches and a neurologist was called to examine me, who then referred me for an MRI head scan. The scan came back clear.

However, from the lunchtime I started having problems with my stomach. I threw up (sorry if this is TMI) black vomit which I now know to be blood. Then I started to pass what I thought was diarrhoea but turned out every time I was going to the toilet I was passing volumes of blood. Each time I went to the bathroom, I would get so dizzy the floor would swim up towards me and I thought I was going to pass out and had to hold onto the sink in order not to collapse.

Everyone was so fixated on the headaches for a while that it took a while for them to consider that the headaches might be a symptom rather than the cause of the illness. When I mentioned the blood loss at first, the midwife initially thought I was getting confused with the normal blood loss you experience after birth. I had to push later on in the day and say how worried I was about the blood loss in order to eventually get a stool sample taken.

The next morning I was still passing blood and the doctors began to wonder if I had contracted C. Diff  which is a stomach infection that can be caught during hospital stays. At which point I was put on infection control just in case. However, they also decided to call a medical doctor (rather than obstetrics) for a consult.  It was this doctor who suspected either a stomach ulcer or an oesophageal tear due to a stomach bug I had had prior to giving birth. I was put on nil-by-mouth and on a drip as I was still breastfeeding and dehydrated. I was also referred for an endoscopy.

The endoscopy was hard, the medicine they usually use to sedate you cannot be given to breastfeeding mothers. So the consultant suggested I tried to do it on just gas and air but I just couldn’t manage it, it turns out I have quite a strong gag reflex! So they gave it to me later on in the procedure and I just remember retching through a lot of it. It also meant I had to pump and dump for 24 hours and very quickly move Bo onto bottles. Which is something I really didn’t want to do and felt quite emotional about (there may have been quite a few tears!), but in the end my health came first.

During the endoscopy it was discovered that not only did I have a stomach ulcer, but that it had ruptured, and my entire stomach was filled with blood. I needed four injections injected internally into my stomach and it also needed to be cauterised. Thankfully they were able to do all of this endoscopically, but I will be honest and say the pain for the first hour afterwards was pretty horrendous and I didn’t quite know what to do with myself.

After the surgery I was still suffering from headaches, dizziness and was so pale there was no colour even in my lips. But the good news is that I stopped passing blood. The next day they took my blood counts. After Bodhi was born my haemoglobin levels were 13, when I was admitted on the Wednesday morning they were 9.7, on the Friday post surgery they had plummeted to 5.6. Which meant it was recommended I needed a blood transfusion. I ended up needing two. On the Saturday after two transfusions, my haemoglobin was 7.1, if it had been 7 I would have had a third transfusion so I was very borderline and despite being discharged was still very anaemic.

The cause of the stomach ulcer is unclear, they suspect it was a reaction to the NSAID painkillers I was discharged with post operatively after my c-section. I can never have an NSAID painkiller again. Ulcers can also be caused by bacterial infections. I was discharged with combination antibiotics and stomach inhibitors. The stomach inhibitors have meant that I cannot take iron tablets as my body just won’t absorb them and I just need to focus instead on an iron rich diet. I am due back for an follow up endoscopy in 8 weeks to check my ulcer has healed correctly and follow up blood tests in just over a week.

The aftermath of healing from both the ruptured ulcer, serious haemorrhage which has led to anaemia as well as still recovering from a c-section has left me still suffering from dizzy spells and headaches, although this seems to be easing day by day. I really have had to limit my activity as I cannot do much and even breastfeeding at first would wipe me out so much it would make me feel ill. But this week I have managed going for short walks, doing some bits around the house and breastfeeding has got a lot easier.

I have to admit I am scared about the ulcer coming back again, now I can reflect over what happened I can say it was a pretty scary experience. I don’t think I had really grasped just how ill I was at the time or just how much blood I had lost. We were just tackling it moment by moment. I am so glad to finally be home and hope that things can only go upwards from here.

We also had a difficult time in the hospital as they didn’t quite know where to put me. The post natal ward didn’t want me as I required to much care than they could provide. If I transferred to a medical ward I couldn’t keep Bo with me, he would have had to have gone home with my husband, which would have meant having to give up breastfeeding. This was something I felt really strongly about and really pushed for, firstly I had established breastfeeding really well and it is something I believe to be important. But secondly, if at all possible I don’t believe a mother should be separated from her 9 day old baby. Several times it was threatened that Bo would have to go home, but both my husband and I really pushed for us to be kept together.

In the end, they found a compromise and I was kept for my stay in a delivery suite in the labour ward. Which had more staff for the one on one care I needed and it meant that Bo and I could stay together and other than the 24 hours I needed to pump and dump following my procedure I could keep on breastfeeding him. The midwives that cared for me were so lovely, there was one in particular I really bonded with who actually came to hug me at the end of her shift, they all really felt for what I was going through. Also talking to sister on the ward she agreed that there was a distinct lack of procedure in place for mothers who are readmitted with a medical rather than an obstetrics problem. But in the end they did everything they could do to help me, which I am grateful for.

It’s hard to really express how I am feeling after all of this. I didn’t realise until I got home that a ruptured stomach ulcer for example is classed as a medical emergency. At times I feel a bit overwhelmed about it all. But I am glad it was me that was ill and not Bodhi, who has continued to grow and thrive despite everything that has happened which is amazing. I also want to say a big thank you to anyone who has ever given blood – you’re amazing!

3 thoughts on “Experiencing a Ruptured Stomach Ulcer After Birth”