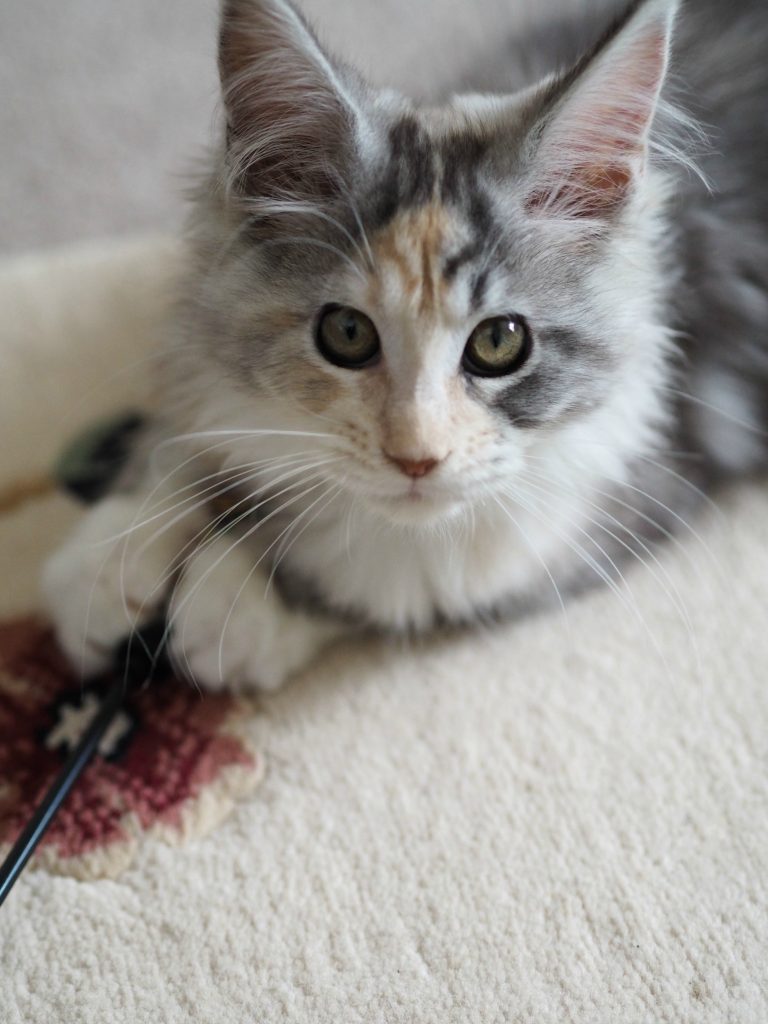 How We Lost our Kitten to FIPS

I never expected to be writing this post. Who does when you get a kitten? Our Christmas was a rather up and down affair – which I will write about in a separate post. Christmas itself was lovely, don’t get me wrong but it was surrounded by some hard times.

When we moved house we had discussed getting another pet. For a while, my husband wanted a tortoise because he had had one growing up. But, when we had looked at the logistics and did some research, keeping a young one requires a lot of work and heat lamps and we decided it wasn’t something we wanted to do.

When we moved into the house we fell in love with one of our neighbour’s cats. We’d never seen anything like it and in fact, at first, I thought there was a dog in our garden. I googled it to discover the cat was a Maine Coon and the more I researched I learnt what lovely affectionate cats they are, so we decided instead of getting a tortoise we would get a kitten.

We brought our new cat home in October and named her Sparkle. Our son is a huge cat lover so we decided to surprise him and it was wonderful. She fitted into our family really well. She was super affectionate, playful, loved human interaction and unlike other breeds of cats that can be aloof with children, loved being with the children. She even didn’t mind the dog, who is big enough to be intimidating to a little kitten. She and our other cat soon became fast friends playing and cuddling up to one another.

She has always been quite a sneezy cat, but as she didn’t exhibit any other symptoms and passed her checks with our vet with flying colours I didn’t really worry about it. But on the Thursday before Christmas, I noticed that she has some green discharge coming from her nose and when I gave her a cuddle her belly felt quite swollen. So I called the vets and got an appointment that afternoon. I really expected that she has just got a sinus infection and would need a shot of antibiotics, and I realised I had missed her last dose of worming treatment so thought maybe her tummy was a little sore because of that. I didn’t expect that look on the vet’s face – you know the one – after he had examined her.

It became quickly apparent that Sparkle was a lot sicker than we had realised. The vet took blood tests there and then but advised me she would need a scan in the morning that she either had a problem with her heart of an incurable disease that affects young cats called FIPS.

After a heart scan and an ultrasound the worst was realised, Sparkle did indeed have FIPS. We had never heard of FIPS before, but it is incurable, fatal and there is no immunisation against it. The vets explained to us that cats can be carriers of the virus and get no symptoms but be absolutely fine. But in a small percentage of cats it can mutate and be fatal – this usually affects kittens or senior cats. And that once it mutates there is nothing they can do.  By the time Sparkle was diagnosed she was already in organ failure and we had to make the decision to put her to sleep as it was the kindest thing to do.

I have found this link quite useful and explains it better than I can as I am no expert. I realised afterwards that Sparkle has been displaying symptoms we hadn’t really picked up on. She still had a great appetite and in fact that week I said to my husband we’re going to have to increase her food as she always seems hungry. But I can see now that she had stopped playing with our other cat and had been a lot more lethargic than usual. Also, she had had a bit of an upset tummy and I had had to help my husband clean her us as she had long fur.
In the next week, we will be getting our other cat tested to see if he is a carrier, if he is we cannot get another kitten as it can be passed on. We also have to pray it doesn’t mutate because if it does there is nothing we or the vets can do to help him. But I am trying to put that to the back of my mind. If he is a carrier, we can get him retested every 6 months to see if he is no longer a carrier. If he isn’t a carrier, we still have to wait about 3 months to make sure the virus inside our house has died and cannot be passed on to another cat. If he turns out to be always a carrier we cannot get another kitten until he passes. We’d love to have another Maine Coon as Sparkle really was wonderful but I will not get another kitten until we are absolutely sure, it would be wrong to do so and unbearable to lose another cat like that.
It was such a shock that within 24 hours of her vet’s appointment we had to put Sparkle to sleep. It was actually quite devastating. The worst part was telling the children, Logan our eldest loves cats so much and he just couldn’t stop sobbing and we’ve had several nights where he has woken up crying saying that he misses her.  It was particularly hard it being two days before Christmas. Although Christmas did serve as a distraction and I do think it helped the children to get over it.

1 thought on “How We Lost our Kitten to FIPS”