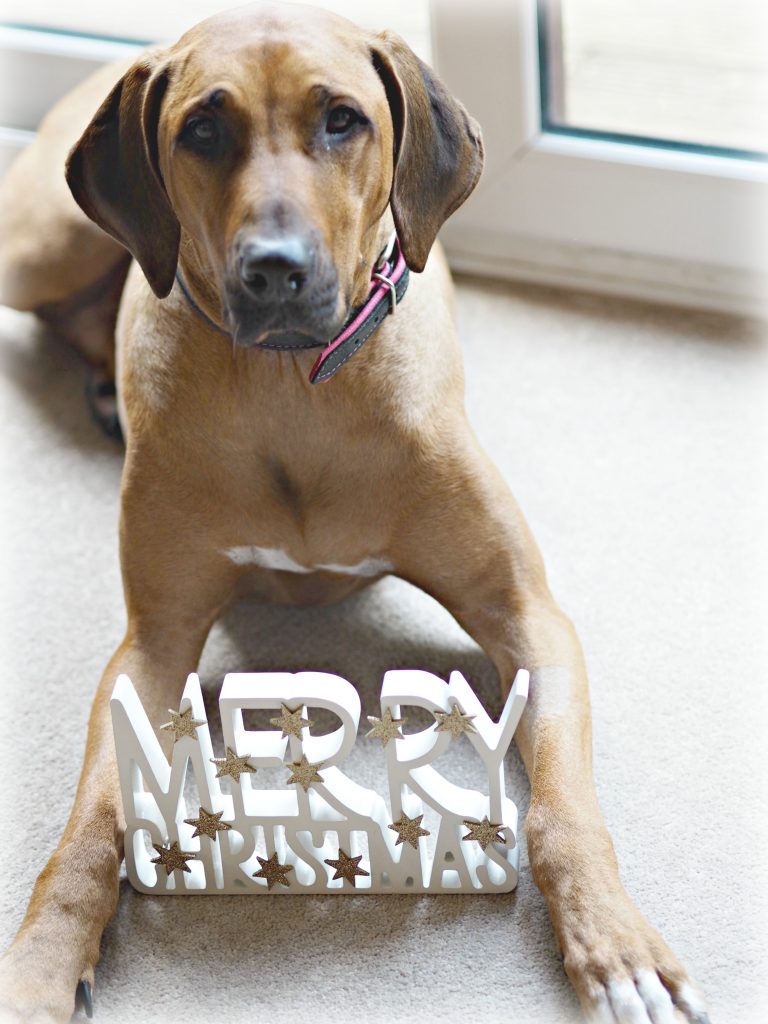 I updated you a little while ago on our decision to amputate Florence’s tail. It wasn’t an easy decision, but it was one the vet and my husband and I thought was the right one.

The day she went in for the operation my husband took her in and had a chat with the vet about how far up to amputate the tail. The further you go up, the more complicated the operation is, as the more nerves there are in the tail. But at the same time, too short and she might be open to injury and not healing properly. In the end, it was agreed to remove about half of her tail.

When she came home, she was inevitably very sore. Needed a lot of painkillers and was unsteady on her feet because of the anaesthetic. The first few days were easy enough, she was subdued and sore. But we learnt the hard way never to underestimate the intelligence of a Ridgeback. It barely took any time for her to work out how to get her collar and cone off. We tried more than one cone, but she managed to get them both off. She isn’t left at home alone very much because I work from home, so she didn’t have a lot of time to do a huge amount of damage. Then one night she got the cone off and did an awful lot of damage. She got her cone off, her bandage off and tore out all of her stitches, she made a real mess of herself.

A call to the vet later, and unfortunately she had to go back in for surgery to be re-stitched. Her tail was very swollen because of the damage she did to it. We were quite worried though about the aftercare – how were we going to stop her getting the cone off and doing the same thing again? After some internet research, asking if people had experienced similar problems in a pet group and another big chat with our vet we decided to attach the cone to a body harness rather than a collar and keep her sedated for the weekend. She was put on a strong dose of Tramadol, which we slowly reduced over a few days.

For the most part, the harness did its job, to keep her from getting too bored on the advice of the vet we put her back onto gentle exercise. She hated the cone with a passion – I think most dogs do. We tried some evenings taking it off to give her some relief, but as soon as either my husband or I were distracted even for a moment, she was back trying to get at her tail. So we decided we just couldn’t risk it.

Unfortunately with just 4 days until she was due to have her stitches removed Florence being far too clever a dog worked out how to loosen her harness, get one leg out and then get the harness and cone off. The first time she did it while I was doing the school run she went at her tail again. After texting several photos across to the vets I was just advised to clean the wound with cooled, boiled salt water and luckily she hadn’t got any of the stitches out.

I have to admit it was a nerve-wracking 4 days, if she got the stitches out and needed surgery again I was really concerned how we were ever going to stop her getting to the wound again. She did get her cone off every day, but luckily she managed to not do too much damage. I think it was to do with the fact she has given ‘proper’ stitches rather than dissolvable ones in her second surgery which made it harder for her to get them out.

We limped it through to the Friday, where finally she was well enough to have them out. I’ve never seen a dog so happy than when she came home from that vets. No cone, stitches out, tail healed. I also have some hope that our furniture and walls recover from living with the cone for some weeks – let’s just say I’m glad we haven’t started decorating yet! It’s also lovely to get our happy Florence back.