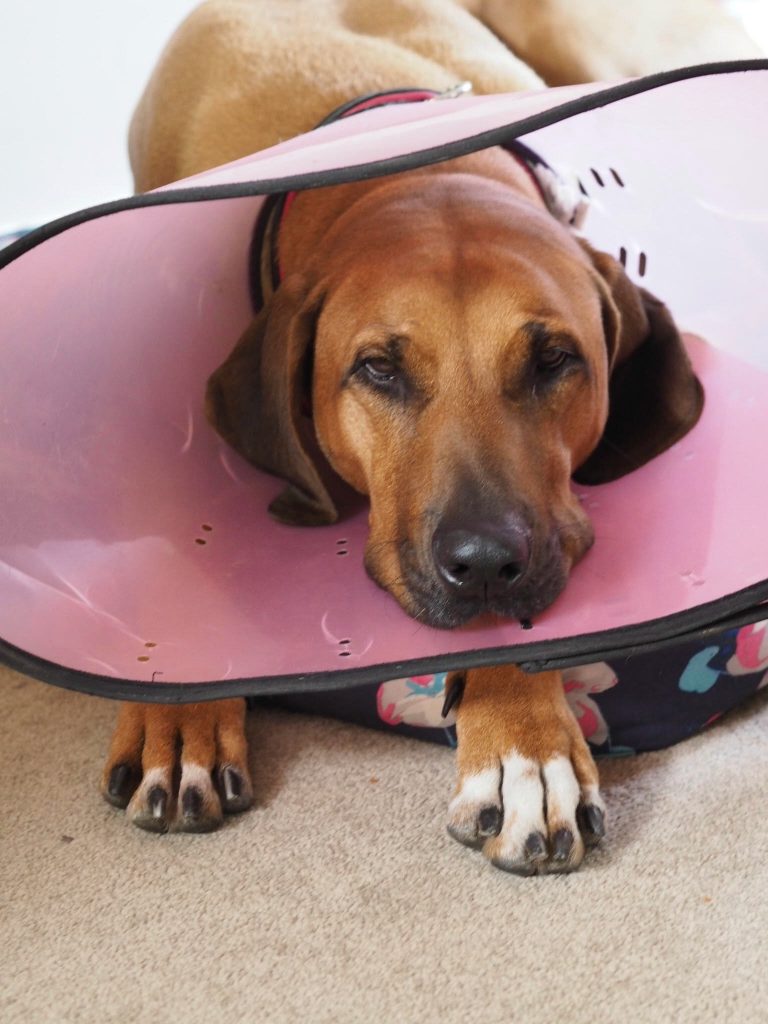 Making the Decision to Amputate our Dog’s Tail

If you follow me on Instagram, you may have seen on my Insta Stories that our dog Florence has been having a rough time of late. It all started about a month ago when she went to her annual checkup for the vets. There was a small lump on her side, that looked a bit like a wart, but kept scabbing and wasn’t really healing. So I thought I had better mention it to the vets. The vet had a look at it and said he wasn’t happy with it and wanted to remove it and do a biopsy.

I have to admit at the time, I thought he was being a bit over cautious and expected not much to come of it. It turns out I was wrong and the lump turned out to be cancerous.  Thankfully it was low grade, they managed to remove all of the offending tissue and no further treatment was required. She was given the all-clear from the vets and seemed to be healing up nicely. Although she really hated the time she had to have off running.

It Started with a Small Cut

Fast forward 4 weeks later and one night my husband was rather late home from work and she went absolutely crazy in excitement when he came through the door. During the excitement, she managed to cut her tail. We’re really not quite sure how.

Ever seen the aftermath of an excited dog with a cut tail? It was like a scene out of a massacre. There was blood sprayed everywhere. Up the walls, all over the kitchen cabinets, the floor, the radiator. After we cleaned up her tail, it took us quite a while to clean the walls. But the tail seemed to scab up and I didn’t think much more of it.

Two days later, I came home and noticed her side where her lump had been removed was swollen. My husband and I investigated it and realised it was oozing pus. A quick call to the vets and they asked me to come straight in.

A Surprise Reaction from the Vet

I find whenever I take Florence to the vets that there are vets who are good with Ridgebacks and some that don’t quite understand their temperament. They are highly intelligent and sensitive dogs, as well as incredibly strong and you do have to know how to approach them to get their respect. Not that Florence would ever hurt anyone it’s more about her feeling comfortable.

She was so anxious by the time we got into the consulting room, but I was immediately impressed by the vet’s approach. He sat down with her and calmly stroked and talked to her until she calmed. He didn’t even attempt to examine her until he did this.

He was indeed concerned by her side and prescribed antibiotics, but what surprised me was his reaction to her tail injury which had started bleeding again with the rise in blood pressure with her anxiety. He looked at it and said we need to jump on this straight away – tail injuries can be very serious. They easily become infected, rarely heal as it’s impossible to stop a dog wagging their tail, and often the tail can start to die.

Straight away we got a tail saving device on her, the dreaded cone of shame and a combination of antibiotics and anti-inflammatories. I have to confess to being naive about the whole thing and had thought it was just a cut and if we hadn’t taken her to the vets for her side, would not have thought to take her to the vets about it. The vet was really good and informative particularly as he has recently unfortunately gone through the same thing with his own dog, so had lots of tips on what would and wouldn’t work. But also warned me that tail injuries are notoriously hard to heal.

The Decision to Amputate

Florence being the wilful madam that she is, did not take well to the vet and I’s measures to save her tail. I popped her into the car while I paid the bill at the vets, by the time I returned she had already lost the collar. And thus commenced the game of how quickly she could lose the cone and shred the tail protector.

I remembered that my sister not too long ago had gone through a similar journey with her dog and in the end had to have her tail amputated. So I decided to have a chat with her and her husband to see if they had any advice on the subject. Their advice was that they wish they had had the operation to amputate sooner. The reason being they went through weeks of trying to heal it, weeks of cones, tail protectors, restricted dog walks and in the end it just wouldn’t heal. But also part of the problem is that if you do get it to heal that the scar tissue itself is really thin and prone to be cut again and then you have to start the process all over again. It was just a painful process.

After a weekend of a totally miserable dog the tail still not healing and bleeding every day,  shredded tail protectors, taking out dining chairs and all sorts with the cone, my husband called the vet for advice. He also shared with the vet my sister’s thoughts on how she wished she hadn’t put the dog through weeks of trying to heal it and just got the operation out of the way.

I think because the vet himself had gone through something very similar himself he actually had a really candid chat with him. The vet’s words to my husband were – as soon as I saw that tail I knew I would be amputating it eventually, it was just a case of when. That he could tell by the injury. My husband’s response was –  so it’s a fait accompli then? The vet’s view was it was very unlikely to heal. Which led to discussions about a potential operation. At the end of the day, we just wanted to do what was kindest for Florence. If there was a chance of it healing we wanted to give the tail a chance to heal, but at the same time, learning from my sister’s mistakes we didn’t want to go through weeks of trying to heal something that wasn’t going to heal.

He told us we didn’t have to make any decisions right away, that there was no pressure. But ultimately he thought the kindest thing to do would be to amputate her tail.

I don’t think making a decision for a pet’s health is ever easy, especially as they cannot talk. I also think that given my sister and the very vet we have been working with has been through the same decision recently it meant that perhaps we made the decision to amputate sooner than we would have normally. But ultimately it was the decision we came to.

Florence had half of her tail removed yesterday, and part of me feels awful. Since she has come home she has sad and whimpering – although this does ease when the painkillers are fresh. Her long, curly tail was part of her personality and now it is gone. We’ve been giving her lots of strokes and reassurance and she cried when my husband went out for a run without her this morning and we know she has been missing her runs terribly.  So with that in mind, the sooner she is healed the better. That dog is born to run. She is back to the vet this evening for a checkup and dressing change.

If you’d have asked me a couple of weeks ago about my thoughts on docking dogs tails, I would have said I was absolutely against. But I have to say I didn’t know how serious dog tail injuries could be. That something as simple (which is what happened to the vet’s dog and is apparently very common) as hitting their tail on the edge of a radiator the wrong way can lead to amputation. I still don’t know if I would go back to the days when dogs were docked as standard, I do love seeing dog’s curly tails, but it definitely has made me think.