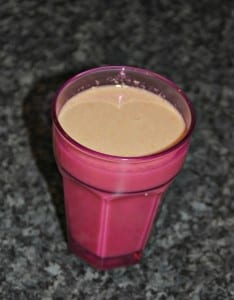 I was really excited when I got the chance to review a product from Monkey Nutrition as I have become more and more interested in nutrition, in particular the right nutrition for exercise over the last few months. As I have blogged about before, I needed to lose weight, so I started taking an interest in what I eat. Using My Fitness Pal to track my macros I’ve tried to reduce overall calories and get the right amount of the nutrients I need. I’ve found that I now tend towards high protein, low fat foods (such as chicken and tofu). So it seems logical to explore sports nutrition as that seeks to deliver an exact balance of protein, carbs and other, more esoteric substances required after exercise.

Once I’d agreed to do the review I then became a bit worried. My impression of sports nutrition was that it was for guys spending a lot of time in the gym and really working out hard. I do what I think is a reasonable amount of cardio, but I’m no gym bunny. I began to wonder if sports nutrition was really relevant to an older, more casual athlete or whether it was solely the preserve of young men with improbable beards and gym memberships.

The product I got sent to test (I was offered a choice) was the Monkey Nutrition M-Fusion recovery powder (£32.99). I chose this as it not only contains protein and carbs, but also compounds to promote joint strength. I recently had a long running ankle injury so am very focused on looking after the bendy bits. Another draw for the M-Fusion powder was that a serving can be as little as 115 Kcal dependant on how many scoops you have. This is something that is important to me as it has to fit into a calorie controlled diet.

So here’s the technical stuff, as I understand it. When you exercise hard you overload your muscles, once the workout is over while recovering, the muscles build stronger to deal with the increased load they are under. To do this they need to be supplied with the building blocks of muscle, proteins. Now, you can just eat loads of steak to get protein but the problem there is that as well as proteins, you’re ingesting lots of fat. So you need a way to ingest lean protein without piling on the pounds. Whey is an ideal protein as it contains branched chain amino acids which are like super fertiliser for muscles. Crucially, whey absorbs quickly and can be put to good use by the body soon after the workout. M-Fusion recovery contains whey and much more besides. I won’t list out all the details as these are readily available online however the bottom line is M-Fusion delivers 46% which is a similar level to tofu.

It’s important to point out here that though one goal of the M-Fusion is a good serving of protein, it’s not the only goal here. Protein powders are available that deliver a much higher percentage but they do not give the recovery and joint health benefits that the M-Fusion powder does, this is more relevant to me as a general athlete. Perhaps I would look elsewhere if I was solely lifting weights, but that is not and never will be my objective. I was pleased with how the numbers stacked up for my needs. The bottom line is that for a 65g serving you get 30g of protein, 26g of carbs and only 2.5g of total fat. What is nice is that among the various ingredients I noticed a hefty 500mg of Glucosamine which has a long track record of use in promoting joint health.

So, now to the testing. I have been using M-Fusion Recovery over my holiday and in the run up to Muscle Acre, a 10km obstacle race on the harder end of the scale. It’s probably worth explaining that my holidays aren’t really focused around lying round on sunbeds, I like to be a bit more active. A typical day would start with a 6km road run (on brutal Cornish hills) ideally followed by one or perhaps two body boarding sessions which would last between 60 and 90 minutes. Day in, day out this probably represents the most intense period of exercise I’ll do in a normal year. Post holiday I went back to my normal routine of 4km trail runs with the dog in the morning, longer trail runs on the weekend (8-10km) plus upper body stuff based around lifting my own weight so pull ups and chin ups. Going into Muscle Acre training straight from holiday has meant that I’ve managed to maintain my level of fitness, but not train signficantly more than usual. I felt this was a far test of the ‘is a sports nutrition product relevant to my training’ aspect of the review.

So, next on to how I took the product. First I had it straight up, which is mixed in water. I am not sure if this is to everyone’s taste but I liked it. The basic flavour is cinnamon with a hint of vanilla. Truth be told I would have preferred this to be more vanilla but that’s a personal preference. It didn’t taste weird or milky and had a pleasant thickness to it. I used a simple shaker to mix it up and it all combined easily into a nice smooth shake.

I then thought it might be nice to take the smoothie idea a bit further so I tried mixing in 0% Greek yogurt and some honey for flavour. This really did not work for me at all, the yogurt taste came through too strongly and did not go well with the cinnamon of the M-Fusion. 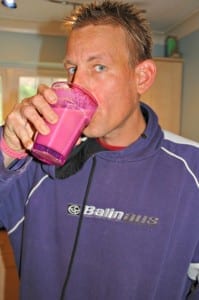 I started thinking about tastes that go well with cinnamon and came up with the idea of trying M-Fusion with dark berries. As I was on holiday I did not have a blender and so bought some Innocent Smoothie Blackberry, Strawberry and Blackcurrant flavour. This was lovely, the tastes mixed really well, the smoothie mixed into the powder easily and I thoroughly enjoyed the spicey edge the M-Fusion brought to the mix. This would be my ‘money no object’ post workout suggestion. The downside here is that the pre-made smoothie or just the fruit to emulate it add a significant cost to the drink (which is already around £2.36 for a full 2 scoop serving).

The last experiment I tried was mixing it hot with a chocolate and orange options drink. This keeps the calories low but I thought it might add a different edge, perhaps for winter workouts. The good news was that the chocolate, orange and cinnamon worked really well taste wise. The bad news was that the hot water really didn’t seem to want to mix with the M-Fusion powder. I don’t think I’ll give up on this idea as it seems perfect for after winter runs but given that it’s July my enthusiasm for the hot drink experiment wasn’t extensive.

Further experiments I thought of were to add some things like flax-seed or chia seed for even more protein and micro-nutrients but, truth be told, I like the M-Fusion best as it comes. I tended to make it with just one scoop of powder but that’s fine for my requirements.

So, in conclusion I liked this stuff. Yes, the protein percentage is lower than a ‘dedicated’ protein powder but those do not have the breadth of other nutrients as included here and, for me, these are what make the difference. On returning from holiday I noticed that my morning trail runs were leaving me feeling fatigued and somewhat achy. After 2 runs I decided to see if using M-Fusion could help and my view is that it did. Rather than feeling washed out, I found my energy levels were normal, even after an intense run. This last point is the crux of why I believe M-Fusion is relevant to an older and more casual athlete. I would love to smash 3 hours of cardio every day but even if I had the time, between an intense job and the home life that comes with 2 beautiful, energetic kids, I don’t have the energy. My exercise routines need to fit around my life and I can’t afford to be washed out during work hours. This became noticeable as I stepped up my running to prepare for Muscle Acre. Using the M-Fusion to combat this really worked well so I will continue to have it around. I had expected to feel the benefit after longer or more intensive workouts but I will also have it around for when I step up training or just feel fatigued.

*Disclaimer: Monkey Nutrition sent me the M-Fusion Recovery Powder in exchange for an honest review.*