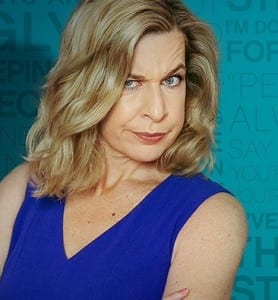 A part of me is reluctant to give her anymore airtime. Half the time I laugh at her outrageous comments and the other time I want to give her a good slap. But, a part of me couldn’t resist adding My Fat Story to my TV planner. Preparing myself to watch her gain 3 stone and show us all just how easy it is to lose it again. Because, you know, fat people are just lazy (her words not mine).

Where to start? When watching this programme or anything that she writes you have to remember that she is earning her living by being deliberately opinionated. I found the show more compelling than I expected it to. Her flippant comments did indeed get my back up at times, but I think I would have been disappointed if they hadn’t.

As she started to put on the weight, at first I thought she looked better. When she spent the first two weeks eating 4000 calories a day and didn’t put on any weight at all, a part of me did want to kill her ;-).

She actually showed a lot more compassion than I expected her to. Yes, fundamentally we all know at the crux of being overweight is eating too much and moving too little. I would have liked to see more depth into the psychological aspects of eating. I don’t think Katie truly grasped what it’s like to truly be overweight and to struggle to lose and maintain that loss. Long term weight struggles, are that struggles and at times they’re heartbreaking. Trust me, I know. She shed a few tears, but she was only truly overweight for about a month of her life. I sometimes think maintenance is harder than the actual loss and I felt she didn’t really address that.

We also have to look at the fact that in order to gain weight Katie was consuming 6000 calories a day. I do think there are people naturally pre-disposed to be slim and those who are not and Katie is clearly of the former category. I also didn’t like the tone either that anything above a size 10 is not healthy.

However, as a woman who is currently overweight I shared Katie’s views about overweight children, I so desperately do not want my own weight struggles for my children. Because I hate it, why would I want that for them? Her meeting with the 50 stone woman was as shocking to me as it was to her. More so, because the woman wanted to be like that I think. It seemed quite incomprehensible.

I found her meeting, with the group of, I hate the term but ‘larger ladies’ interesting. I thought that the asertation that Katie’s comments were a hate crime were absurd. But of course Katie was equally her flippant self. It is quite an emotive subject because it is such a personal issue, it’s hard not to look at the wider problem without reflecting on your own personal ones.

Did I want her to struggle to lose weight more than she actually did? Of course I did. She seemed to lose the first stone and a half relatively easy and quickly. I couldn’t quite get my head around the fact she wasn’t calorie counting and pretty much eating what she liked. Again it goes to show we’re all different.

I finished the show with mixed feelings. I don’t like Katie’s methods or her flippant attitude. I do still believe her to be a media caricature – half that time saying outrageous things to garner attention and of course ultimately work. But I did at times also find myself agreeing with her. I found the show occasionally thought provoking, regularly annoying, but as I said at the beginning surprisingly compelling.

What did you think?