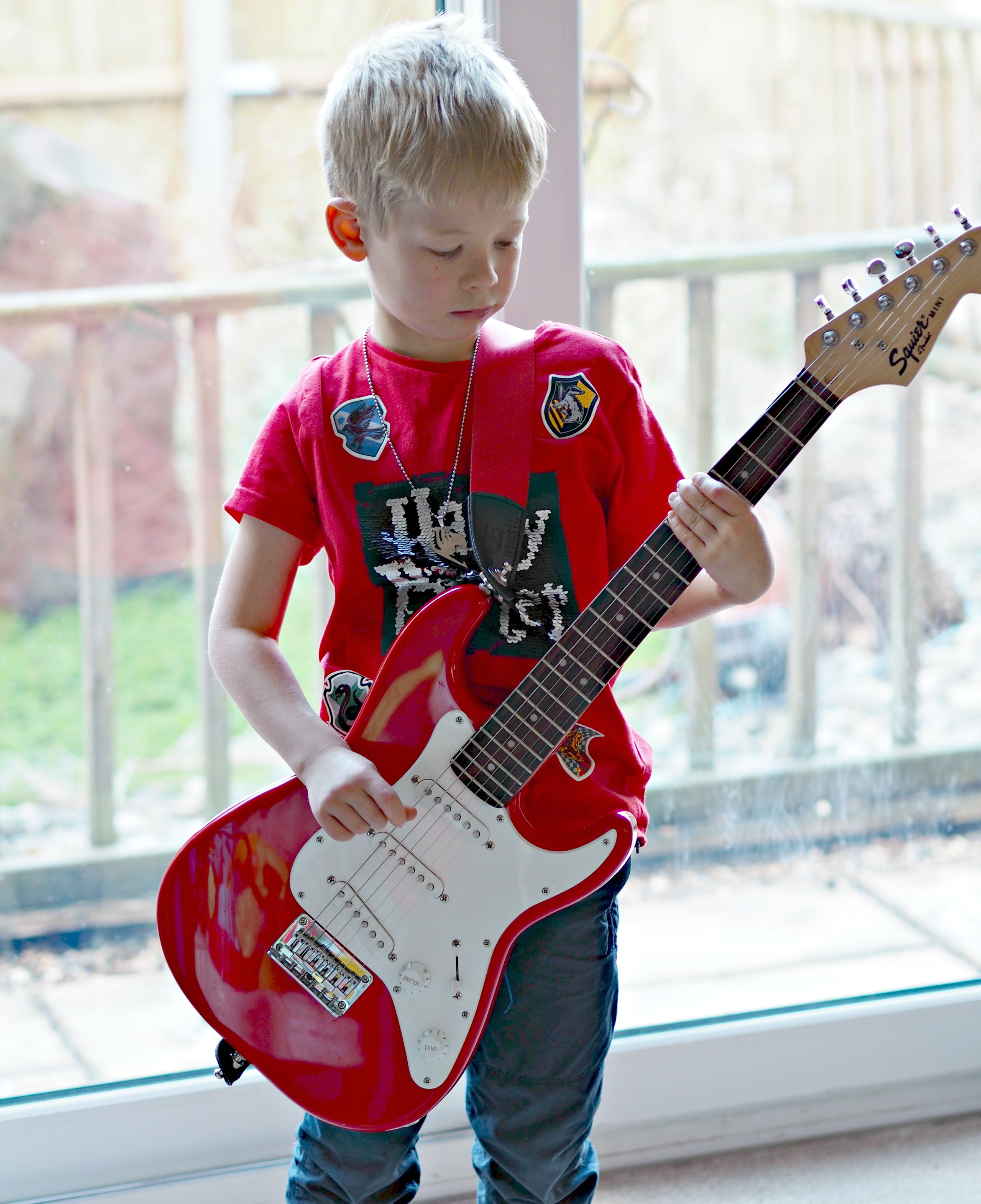 Towards the end of last year my wife and I decided it was time for our eldest to have something other than schoolwork to work on. I run with Logan and do obstacle racing with him and so we felt he had enough sports related activity and so we decided to discuss playing an instrument with him. Throughout our lives both myself and my wife have got huge amounts of pleasure from music, though we have very different tastes. Laura is an accomplished opera singer and I tend towards the more contemporary. Both of us love to create music as well as listen to it. We asked Logan what he wanted to learn in the hope that this would keep him engaged for longer. His answer was immediate, he wanted to play electric guitar and his goal was to play heavy metal (he is a massive Iron Maiden and Jimi Hendrix fan).

We duly did some sums and in late January trooped off to Andertons in Guildford to sort out a guitar and a small practise amp. It did not take long for the weakness in our theory to become apparent. While I was well meaning in my attempts to pass on what I know (not much), it was hard for Logan at age 6 to maintain focus and get into good practise routines. We decided lessons were probably the way forward. I did some research and found that 1:1 tuition comes in at about £20 per hour.

Another option that I’d come across was something called ‘The Rock Project‘. I knew about The Rock Project because a friend of mine runs it in the Berkshire area, but I’d never done much research past clicking ‘like’ on Facebook when he posted about it. I started to look in more detail and the more I saw, the more I liked. Rather than follow a traditional teaching model, The Rock Project combines 1:1 teaching with practising skills in a band setting. Thinking back to my younger days I remembered how I had loved being in a band with friends and how it had opened a whole new dimension of music up to me.

The format is pretty simple, children can attend to study guitar, bass, drums or vocals, by keeping it limited to those 4 disciplines it allows the teachers to focus. The teachers tend to be working musicians (though fully DBS checked) and bring a real world perspective that the kids clearly love and respect. As the name suggests, the kids aren’t learning dry etudes, it’s rock and pop music from day one. Logan’s face when he came home with his first assignment (a Jessie J song) was a picture. Not only was he playing an instrument he loves, he was learning music he can relate to with other people in his band. The sessions are 2 hours long (and cost about the same as a 1 hour 1:1 lesson) and consist of specific instrument tuition before the class moves into the second phase which is a session where all the kids play together. There’s fun stuff like quizzes thrown in for good measure.

So, what’s the verdict? To put it as simply as possible, if you have a child of 7 or older interested in singing or playing guitar, bass or drums I would recommend this above everything else. Every time I pick Logan up from rock school he is fresh and energised with an obvious passion for music and what they have been playing. In addition to the ‘main’ song the whole group learns, he’s been shown riffs from Led Zeppelin, Judas Priest and many more as his teacher has recognised he has a passion for rock music. Week on week I can see that his playing is getting better but what really adds the value for me is that the passion and excitement of playing in a band encourages him to practise daily before school. I’m not going to say I always appreciate listening in to guitar practise before I’ve had my first coffee of the morning, but I’m still blown away that he practises every day. I remember at that age when I played flute I rarely played from one lesson to the next. I really believe that it’s the band aspect of The Rock Project and the passion that the teachers inspire that’s driving his engagement.

Not only does it work out better value per hour than 1:1 lessons, The Rock Project produced a level of engagement and commitment that I’ve not seen Logan apply to anything else in his life and I don’t think he’s an exception. If kids don’t have an instrument there are instruments available for them to use although we did get Logan a guitar. Another side benefit is that The Rock Project is not linked to any one school and so at times when Logan was having a tough time within his local friend group, he had The Rock Project as a social activity separate to school.

If you have a child with an interest in learning an instrument to play rock or pop I cannot recommend The Rock Project highly enough. The first taster session is free of charge so it is not necessary to commit to spending any money without trying first. The Rock Project runs nationally and is easily found on google.