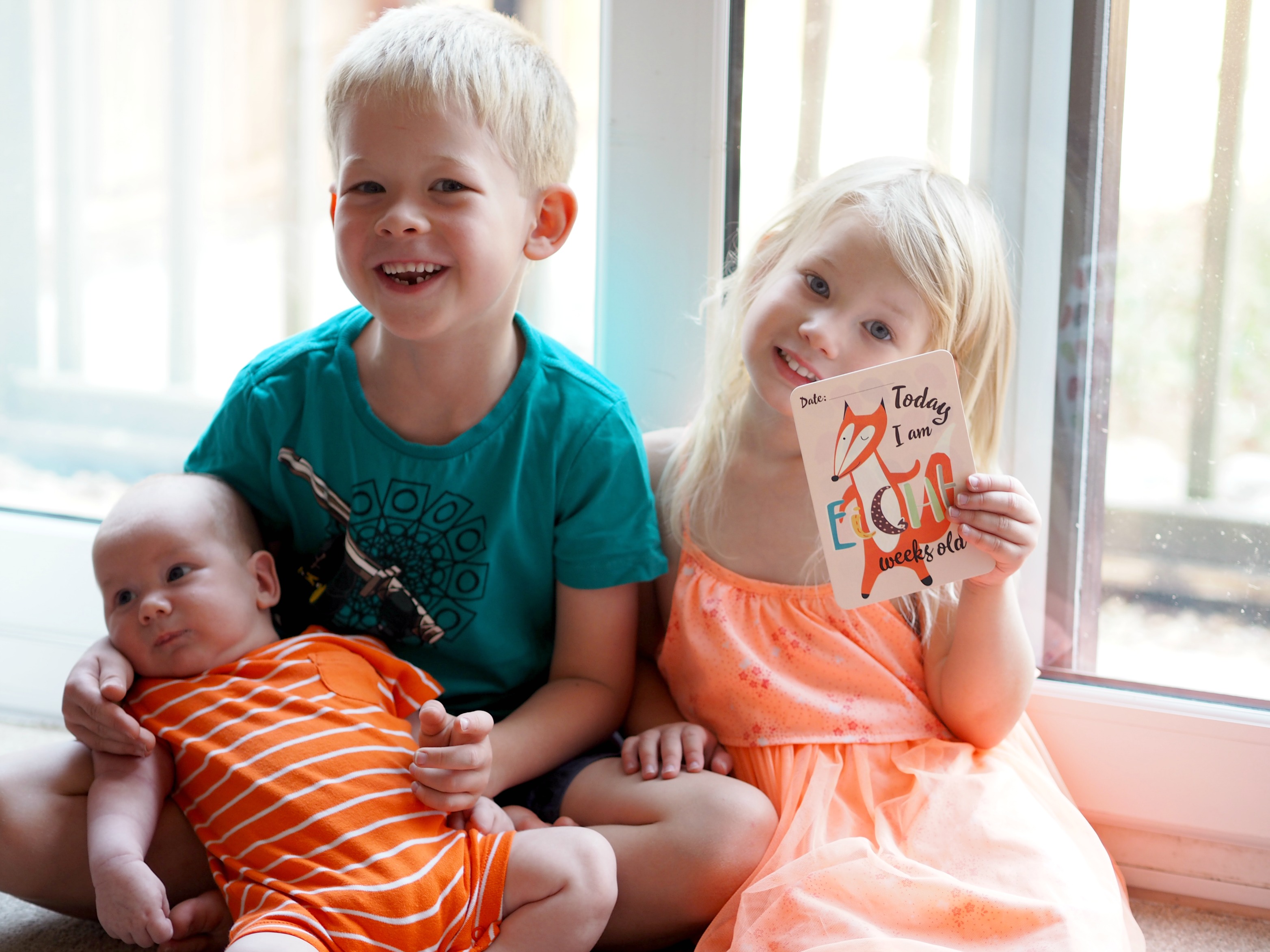 I think this is probably something that most parents say, but I cannot believe that Bo is 8 weeks already. It now feels like our family is complete, as we definitely will not be having anymore children and he has settled into the family so much easier than I anticipated. There is a much smaller age gap between my oldest two children and I actually think the bigger age gap between them and Bo is easier. They are excited about him being here, want to hold him and always want to help me with him. Which is so much easier than having two in nappies like we had with the eldest two.

Bo is developing so fast, he’s already smiling and has recently started cooing. He is just starting to show the signs of laughing too which is super cute. He can track movements with his eyes – particularly watching where I am in the room. He’s nearly got his head control down, although has hit that fabulous head butting stage when he nearly has it then crashes forwards and hits you in the face! He also a very sweet fascination with the cow painting I have in the front room and often gazes and cooes at it.

In terms of sleep it’s all a bit hit and miss, but I do feel like we’re now moving our way more into a routine and I am getting to know him better and work out what he needs. It sounds silly when I type it, but each child is so different. And yet, when I hold my new baby in my arms in some ways I still expect him to react like his siblings did, but of course he is an individual just like they are.

I feel like I have forgotten a lot in the past 4 years since I last had a newborn. What I have noticed is Bo is very prone to getting overtired. It took me a while to clock this and couldn’t work out why he would cry for ages and why I would struggle to get him down, particularly in the evenings and of course began to fear the dreaded colic. Then as I began to do some reading around realised he was suffering really badly from over tiredness and over stimulation. 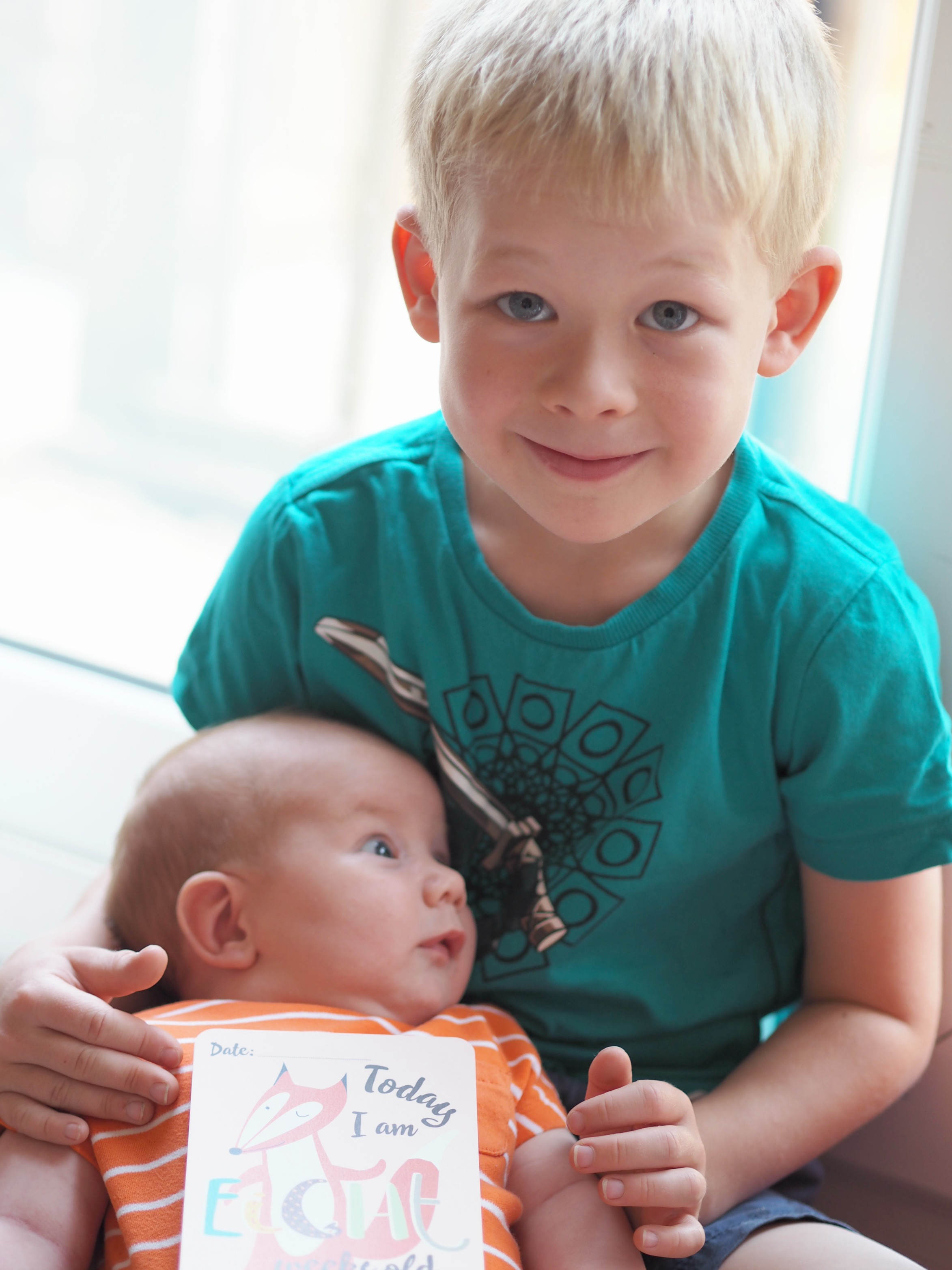 Through a process of elimination I have worked out that Bo can only handle at present being awake for 1.5 hours at a time and then he needs to go down for a sleep. That he only seems to relax when he is swaddled and that white noise makes a big difference to help keeping him settled. To get more sleep in the night I generally try to encourage him to feed every 3 hours in the day, even if that means gently waking him up. But with school runs etc to manage I have had to plan his feeds around these, rather than having him screaming all the way to and from school. But getting him into a regular sleep pattern has turned him into a happier baby. While at first I was having to rock him to sleep every nap and bed time, this week we have moved into a place where he some days happily goes down on his own which is real progress. Although this incredible heat wave has thrown a few spanner in the works and some days I can tell he has really struggled with the heat.

First thing in the morning and dinner time are the trickiest at the moment, trying to get everything done while juggling the demands of a baby. But troubles aside he is such a cutie, such a joy and a lovely little cuddle monster. He’s already doing that one armed reach to the side practising for when he can roll and I suspect he is going to be a baby who keeps me on my toes.