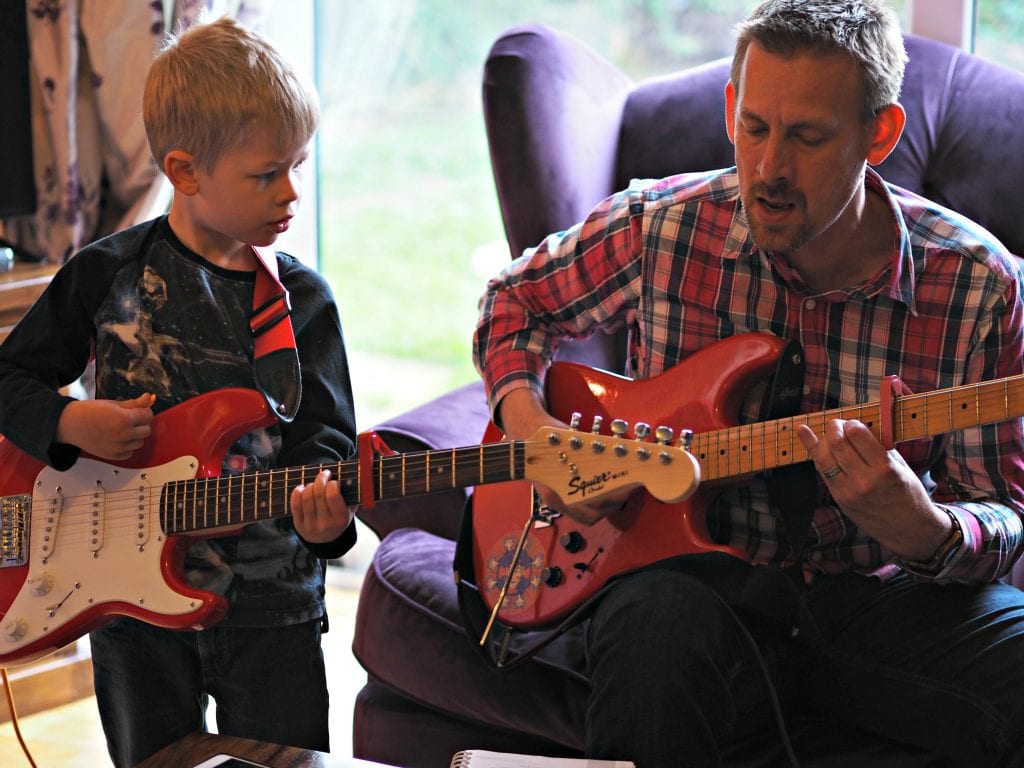 Getting Back Into Playing the Guitar

I’m enjoying being 40, for whatever reason a lot of good stuff seems to be happening to me this year. Earlier on this year we decided that it was time for our son to do a little more than just school work. He’s not a huge fan of after school clubs and so we thought playing an instrument might be the right thing for him. When I was at school we had the luxury of county provided instruments and peripatetic teachers if we were interested in music but that’s not a thing any more. Good job we have the money for all those bombs though! As such we knew we’d be funding Logan’s music ourselves and we’re blessed to be able to do so. As we have to buy the instruments, we wanted something he would engage with and so we asked him what he wanted to play. As he’d very recently got into Faith No More and Iron Maiden I wasn’t at all surprised when he asked to play electric guitar.

Off we went to the music shop and, once surrounded by all the beautiful instruments, I felt that old pull towards playing. I’d played guitar really badly in my youth but put it down soon after getting into electronic music and the party scene. I’d tried to create that kind of music but when it comes to it I enjoy playing music, not composing it so I’d never made it too far.

No sooner had Logan arrived home with his first guitar than I was up the loft getting my old gear down to play. My memories turned out to be correct, while I hadn’t suddenly turned into Jimi Hendrix over the last 20 years it was still a lot of fun to have a little jam.

What started as getting into a position where I could show Logan a few things quickly became a habit, picking up the guitar whenever I have a spare 10 minutes and getting some practise in. What has changed over time is my approach to skills I don’t have. In my youth I’d do things I was good at and if I wasn’t good at them I wouldn’t do them. I also had expectations of myself that I couldn’t match, either in terms of talent or work ethic. I remember buying the entire music to Axis – Bold as Love by Hendrix, trying to play the opening riff to Castles Made Of Sand and, on not being able to do it first time, closing the book, never to return. I don’t mean I had a temper tantrum, simply that I was so used to being able to do stuff I wanted to do, I simply did not know how to approach situations where work and study was required.

Thankfully, one of the things I have learned to do in life is to practise and train myself and to be happy with the progress I make, even though it might not match my expectations. More often than not, it’s those same expectations that cause me pain when I can’t meet them.

I decided to start again from the very start, even though I retain a lot of the information I had when I used to play. I’ve been following a really great (free) online tuition course called Justin Guitar and having huge fun playing simple songs. It’s also helped me to build a solid practise regimen. I do still mess about with stuff that’s way above my level of technical ability but that’s ok every now and again, as long as I keep advancing those fundamentals and I don’t neglect the basics.

So the fingers are sore, the callouses are coming back, but ever so slowly and the wife is annoyed because my atonal howling is interrupting her listening to Grey’s Anatomy. Of course, I’d say I’m doing her a favour with that, there’s no accounting for taste eh.

2 thoughts on “BEN’S ZONE: Getting Back Into Playing the Guitar ”