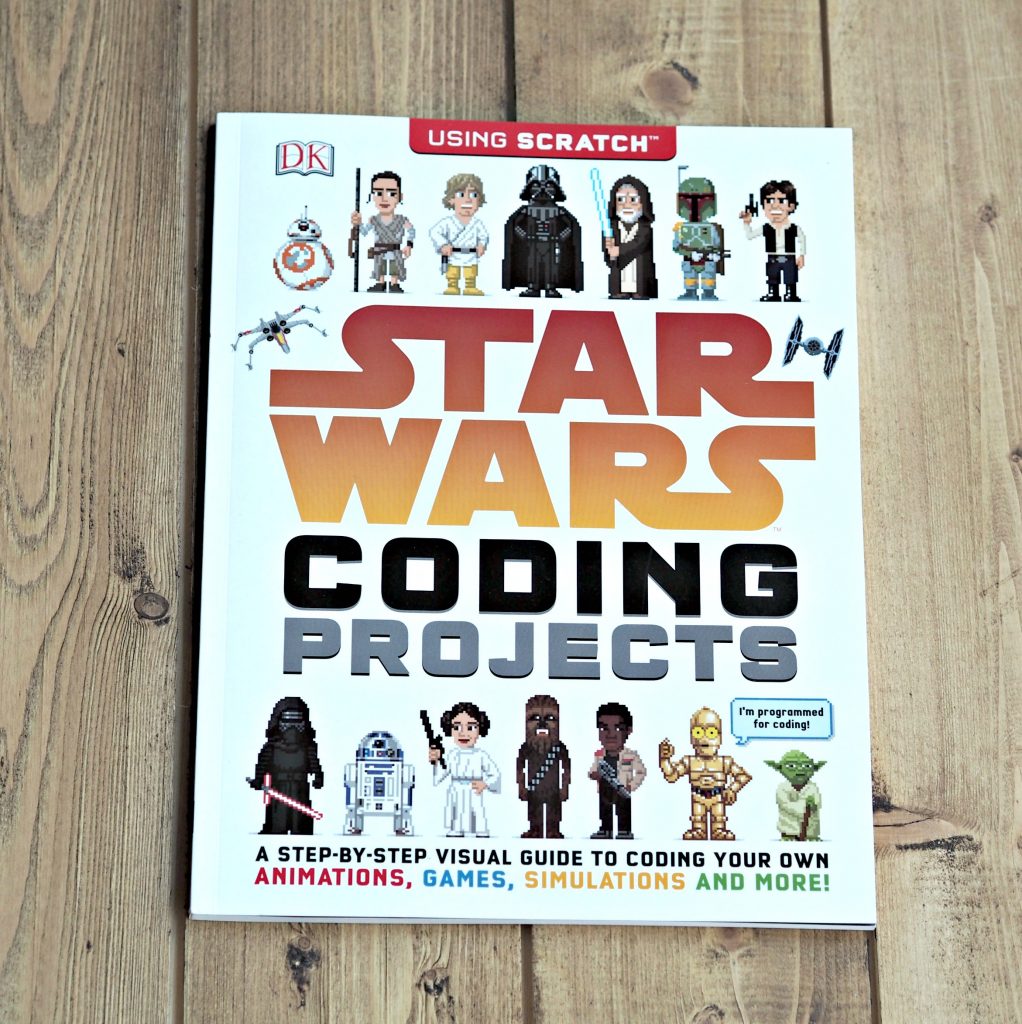 Recently the boy and I have been reviewing what is, in effect, a perfect storm of his current obsessions, Scratch projects with a Star Wars theme. Scratch is a programming language developed by Harvard University to teach children to write code. Though I’m not one of ‘those’ parents I do try and do stuff with the boy that will help him develop and Scratch is an easy win. The language is heavily biased towards the audio and visual and comes with a good library of fun sounds and characters that can be made to do fun stuff pretty easily. Scratch runs within a web browser so it does not rely on a beefy computer or specialist software, it’s a perfect start into the world of controlling computers. The programmes are created by locking together block statements that can only lock in a certain way meaning that it is not possible to make syntax errors. The code might not always do what you want but it never fails. As someone who cut his teeth trying to programme the venerable Sinclair Spectrum 48k, this is a definite bonus.

So my son took to Scratch like a duck to water and soon had a cat dancing around the screen making all kinds of really annoying noises. It’s subtle though, in doing that he was unwittingly learning about loops, variables and conditional logic. He often asks to do Scratch when the option is there.

The Star Wars Coding Projects book leads the junior coder through 6 discrete projects, each of which being progressively more complex. The book does not just dump you in there, it has some introductory sections around how the user interface works, how to use sprites (on screen characters), how to use sound, even how to make your own sprites and so on. Here we have the first problem, Logan, being 6 does not want to read anything, he wants to do stuff, right away and so reading stuff beforehand is not conducive to that. 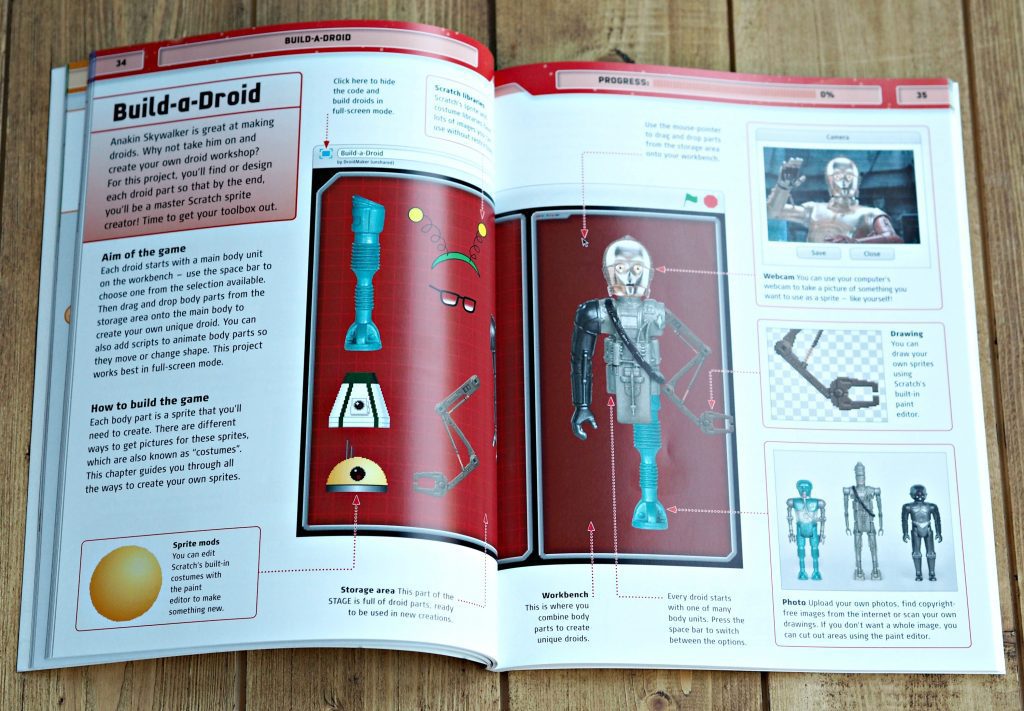 Once into the project, we’re on safer ground. From the first project on he was pretty happy. The book is pretty thick and so even though they are picture heavy the projects are reasonably complex. The first one involves the Scratch cat collecting energy balls while avoiding a baddie robot. The programme itself is well written and contains some interesting concepts but is definitely better suited to more experienced Scratch kids. All through the project, there are helpful suggestions from representations of the Star Wars characters.

It’s with these characters I have my major beef. The book sells on Star Wars themed projects and contains loads of Star Wars sprites throughout the book and included in the projects. You would think that there is a download link to get the sprites to use in your project. Well, there is not. When the book suggests you use a Star Wars sprite you have to draw it yourself in Scratch’s sprite editor. Now, I’m not artistic and I found copying the sprites very hard, for a kid, no chance. The book does say you can use built in sprites but that’s not Star Wars is it? Given that this is branded on Star Wars and they have clearly built the sprites I think it would have been a nice touch to include them as a download. I cannot imagine that it is a visual rights issue because the book encourages you to create your own versions. It’s not the end of the world because I found some Scratch projects which have Star Wars type sprites in, but that’s just not the point. It’s a Star Wars thing but you don’t really get any Star Wars stuff. 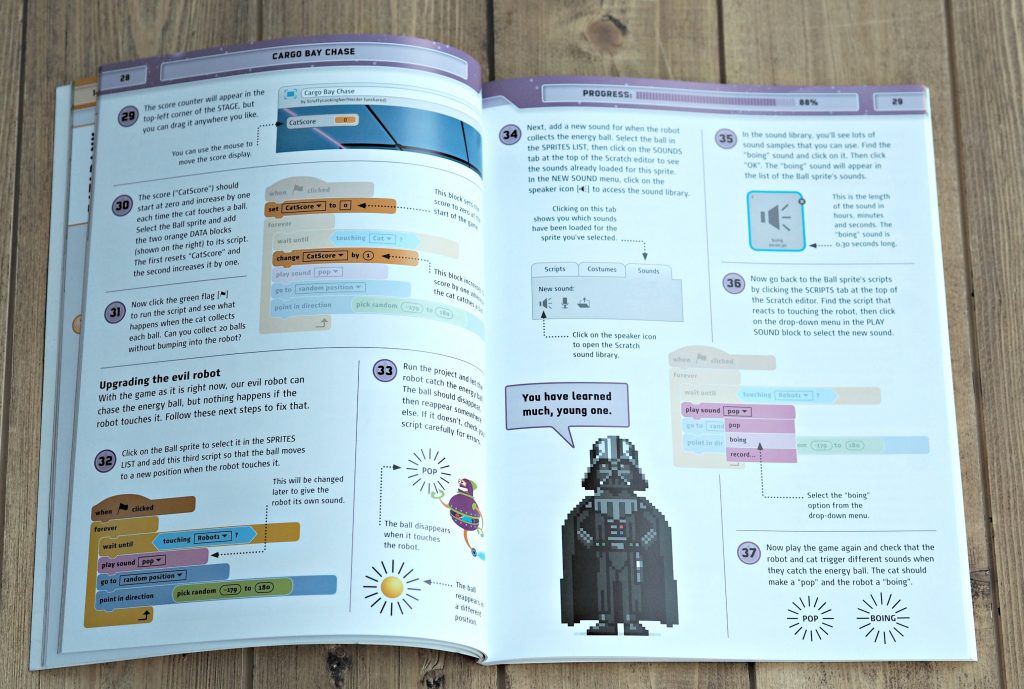 On the positive side – good complex projects which are fun to do together with younger kids or for older kids to do solo. Great that it’s using accessible IP to promote Scratch. Negatives, too much text at the start rather than just letting them have at it, yes, that’s what an adult programming book is like but the point of Scratch is to let them just do stuff and no Star Wars sprites. I’m sorry, that’s a showstopper for me. I’m not going to say cynical to tempt with Star Wars and then add ‘if you can draw it yourself’ but it’s a pretty fundamental oversight. I hate to be cutting in reviews but for littlies ‘Coding for Beginners using Scratch‘ is better and older kids, well, if you start em on Scratch when they’re little they’ll be doing embedded C by the time they’re older.

Buy the book on Amazon

*Disclosure: We were sent this book for the purpose of this review, however, all opinions are my own