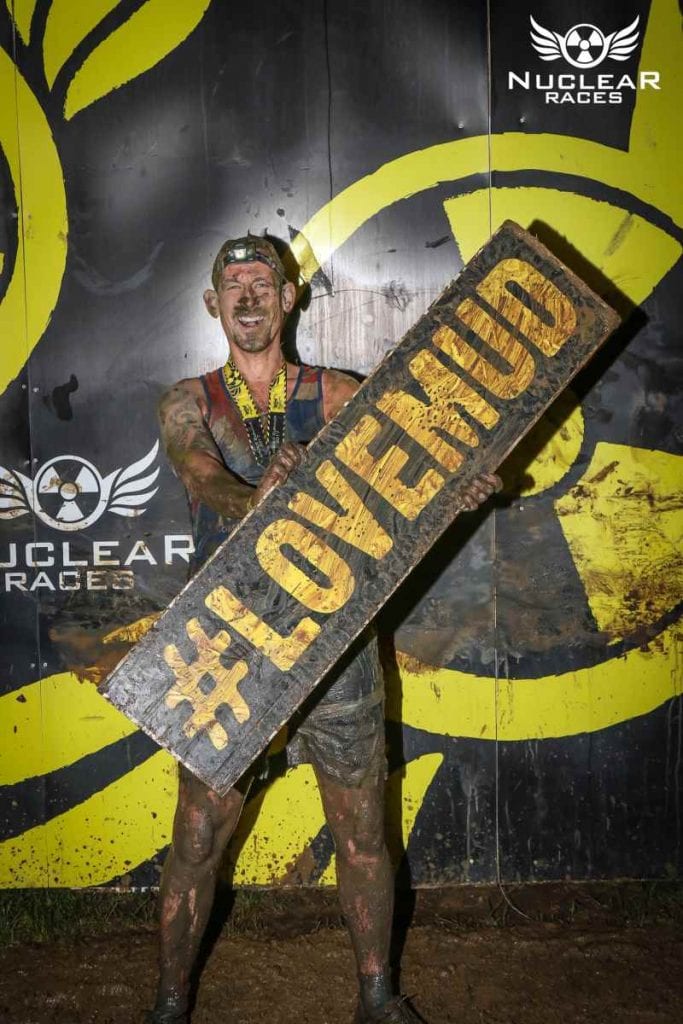 I’m 40, it’s Saturday night and I am standing in a field in Essex in shorts and a T shirt, what in the name of all that’s sane am I doing? Preparing to have the best fun I’ve had all month is what I was doing. Nuclear Races are a massive name in the OCR scene and very well regarded but not a race I’ve done before due to the mission to Essex. Man, I’m glad I did this time.

I signed up for Nuclear Blackout earlier on in the year. The format is very simple, as many laps of the 5k track that you can do in 2 hours. The event runs in the daytime (along with a ‘rookies’ event for kids) and is known as Nuclear Blast. In the evening, as the darkness falls the race runs again as Nuclear Blackout.  Blackout is an OCR with a twist, it’s run in the pitch black with competitors seeing their way through by head torch alone. Yes, total darkness, think I’m kidding?  The marshals have cowbells to let you know they’re there. 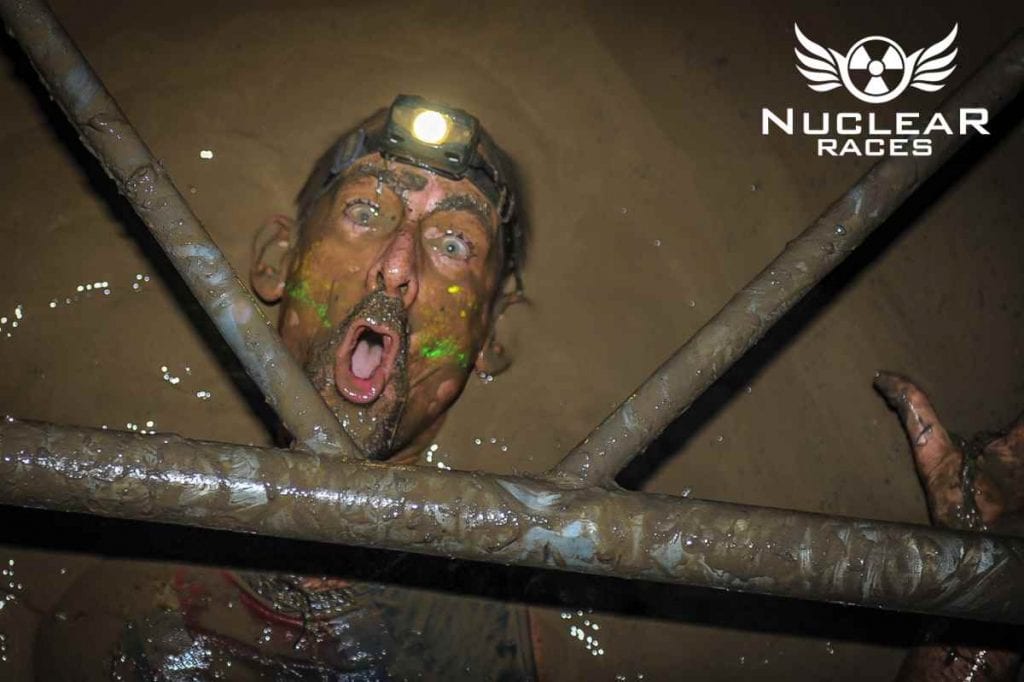 Organisation for the event is among some of the best I have seen. I got stuck in major traffic and arrived with half an hour to spare. As the event was sold out I was really worried that I would not make my wave, I need not have worried. The car park was well run, the registration faultless and I was through and waiting at the bag check less than 5 minutes after getting to the registration tent. Everything was very well thought out too, rubber wristbands were used both for wave entry and also for bag check. This meant I could get super muddy and not worry about not having access to my bags. The wave itself went off exactly on time with good clear announcements indicating where you had to be at what time. As this was my first Blackout and I was running solo, this really helped.

Now to the course, oh the course, I cannot adequately describe how much fun it was. I’d seen some of the obstacles before on Facebook and so I was thinking it would be mainly focused around large set piece type obstacles. I was wrong. The first couple of kilometres had a very definite trail run type flavour, lots of running, lots of mud and lots and lots (and lots) of water. I love water on obstacle courses, I particularly like it when the race director isn’t afraid and you get some proper chest high water sections going on. There was that and more on the Blackout. From running through puddles, down slides and off obstacles water was everywhere and it was great. I particularly liked the fact that most of the climbing obstacles had waist-high water underneath them. The obstacles were definitely tough and it was good to know that if you fell (which I did, a lot) it was into nice soft (though cold) water. 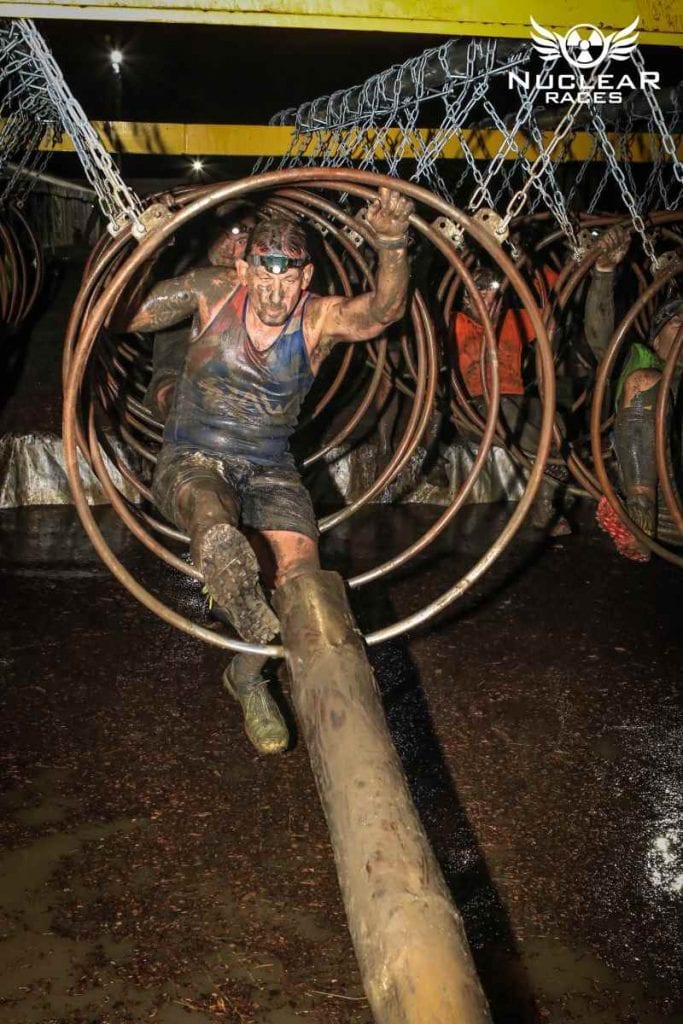 The trail running took in good sections of wood and also open ground with some nice tough hill work mixed in. I have to be honest and say the darkness aspect did not add much for me here but that is because I trail run in the dark every day. I did wish Florence was there at points though. Where the course was not obvious it was marked either with tape or low-level red lights, at no point did I feel lost, I just enjoyed the eeriness of it all.

The commitment to safety was immense. As the course had been used in the day for the Blast it had been super churned by the time we got out there. The result was a quagmire in parts. Of course, this adds to the fun. There’s a certain atavistic fear that grips you when you realise the pressure in your calf is the mud sucking you back down, rather than you powering through it. To combat this, on a lot of the slopes the safety team had spread sawdust. Likewise, on climbing obstacles there were bins of sawdust with which to dry your hands and get extra grip. On one such obstacle I met the safety team who took the time to get some feedback on whether the sawdust and what more could be done. This was really excellent.

It’s remiss of me to get this far and not mention the obstacles. Frankly they were amazing, some of the best I have ever been on. What marked these obstacles out as special was not only the fun level (high) but the amount of thought required to get across them. These obstacles had to be worked out before hitting them. There were some I could not do. There were others I could not do on my first lap but managed or did better on my second. None seemed insurmountable though. The toughest (for me) was a series of spinning discs at head height. The plan seemed to be to hit them while moving and use the momentum to spin from one disc to the next. I got about half way but man was it fun doing so. Another standout was a large metal see-saw which required you to climb out to the middle and use bodyweight to tip the platform over to traverse a gap. With this level of ingenuity, it’s no wonder the race wins awards. 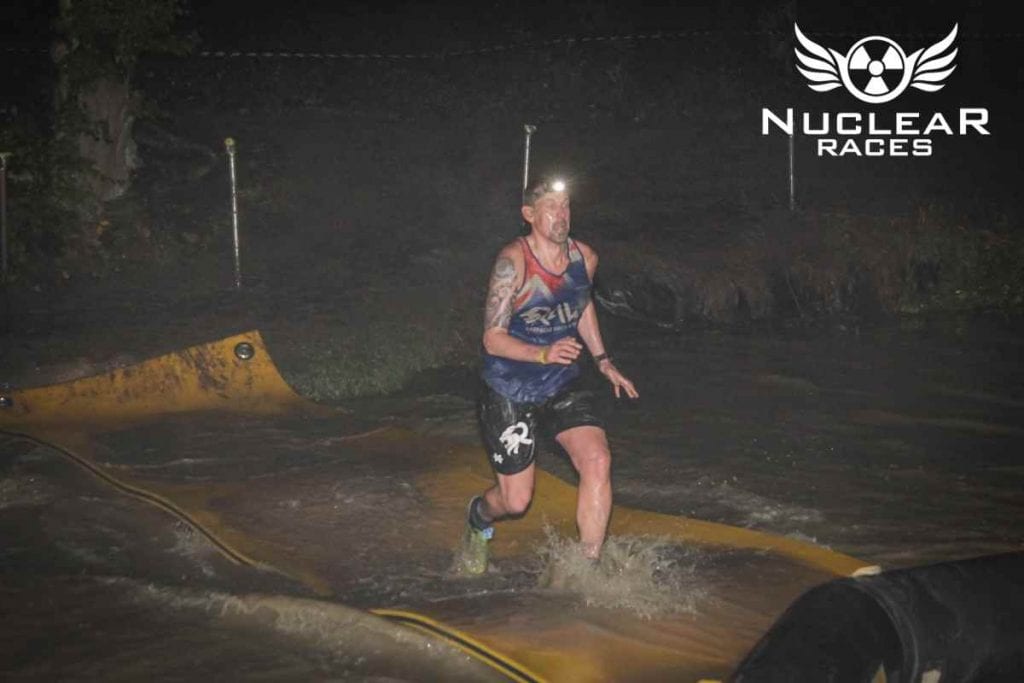 But why ‘Nuclear’ though? Well, that question was answered about 3.5Km in when we suddenly found ourselves faced with an actual nuclear bunker to run through. When long concrete tunnels are lit only by a head torch the experience is spooky to say the least, however, all fears were dashed when on turning a corner we were confronted with the Ghost Squad* rocking out. For me, it’s the mark of a great time if the Ghost Squad turns up to the party.

I was having so much fun it was never in doubt that I’d go out for an extra lap and though it was draining it was probably more fun on the second go around. Despite being 2 hours it was all over too soon and we were brought in at the end of the last lap to the finishers enclosure. Again, the amazing organisation came to the fore. In less than 5 minutes we went from being given our medal, to finisher’s photo, through some warm showers, to the bag drop and finally to a warm mug of tea in the hand. NoT-shirt here, a nice branded mug full of hot tea was far more welcome. We even had a nice well lit tent to dress in. I have to say, this was probably the slickest OCR experience I’ve had.

A standout on this race was how well it was run but that shouldn’t be the main thing to take from this review. What I remember was the sense of fun, the balance between nice natural obstacles and trail running and ingenious set piece obstacles and the real focus on making this a great OCR experience for everyone concerned. They hit the mark squarely on that one. Despite it being a mission drive for me I’ve already signed up for next year. I’ve got a fair few events already booked in but if I can shoehorn in another OCR then another Nuclear is going to be top of my list. For sure, I’ll be doing the Blackout yearly now. 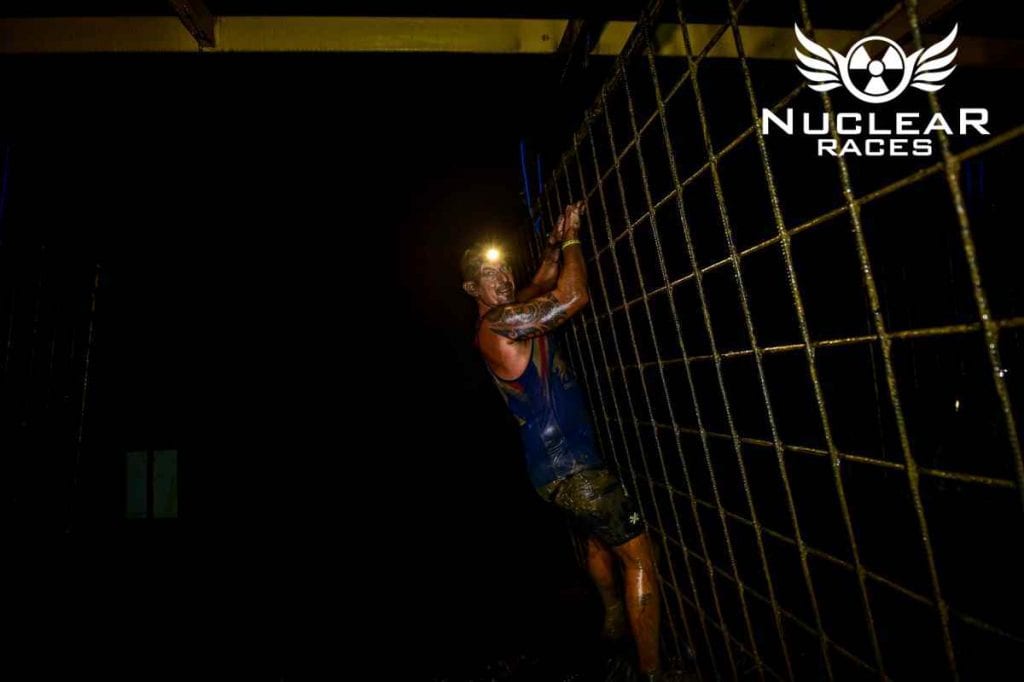 *For the uninitiated the Ghost Squad are the totems of Tough Guy made flesh.  They are famed for appearing in the forests of obstacle racers to help flagging competitors at their moment of greatest need, beneath the war paint and rum fumes they’re also bloody good people.