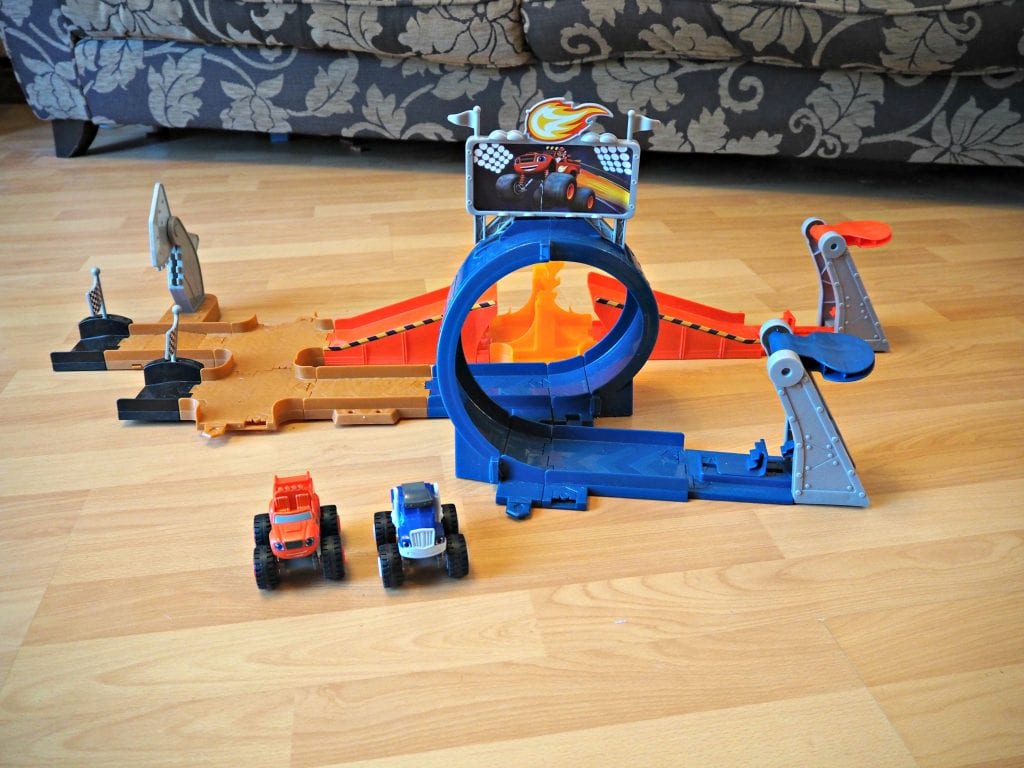 I’ve had some cool stuff to review via the blog, but I can say with utter honesty, nothing has been met with quite the level of anticipation as the Fisher Price Blaze play set. Since its arrival in our house I have been, literally, besieged with requests to play with it and today I acquiesced.

The set comprises a number of plastic track pieces, two car launchers and a model of the Blaze and Crusher cars from the Nickelodeon show ‘Blaze and the Monster Machines’. The idea is that the track is assembled into two side by side race tracks which allows Blaze (good guy) to race Crusher (bad guy). One car goes through a loop the loop, the other jumps through a ring of (pretend) fire. The motive power comes from a launcher which is operated by smacking a lever. 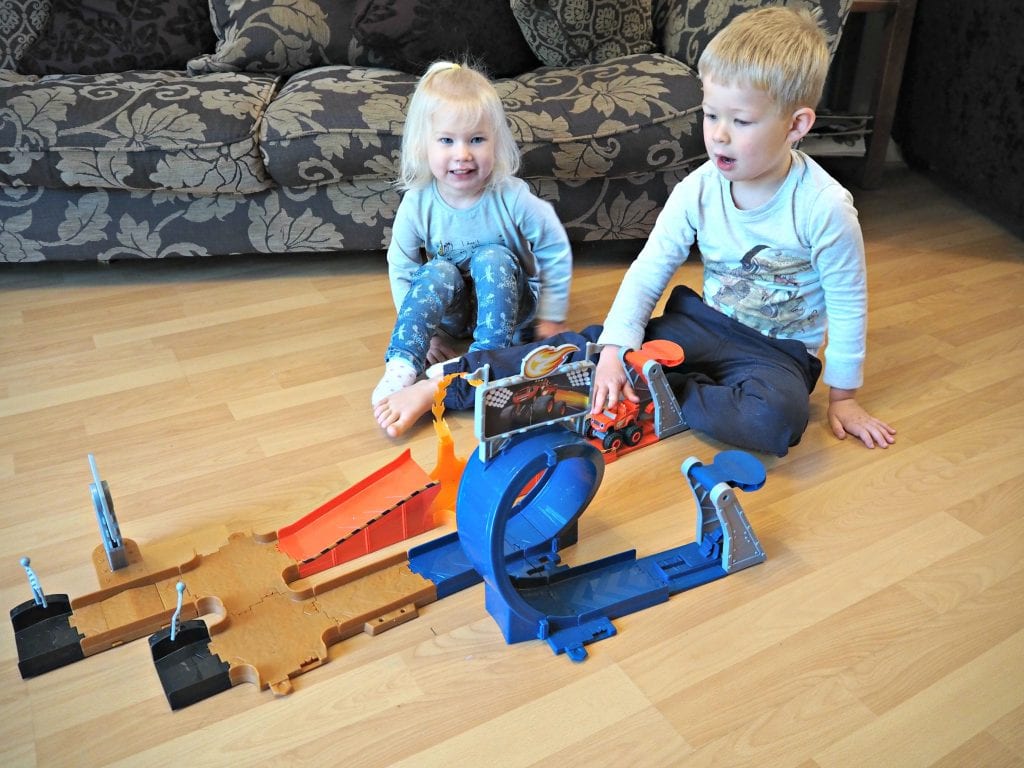 Practically the track is easy enough to set up, although it did require Dad intervention as it was a little fiddly for the kids. Once together it’s provided good entertainment with both kids enjoying shooting the cars all over the place. To get the car round the loop a pretty hard whack is required and it was a bit too much for Aria, but she is only 2, even if she is car mad (the set does say 3+). Logan, who is nearly 5, picked it up pretty quickly and had no trouble getting his car round the loop. The box also shows other track designs that can be built though both kids seemed pretty happy with the basic one, for which you get instructions. 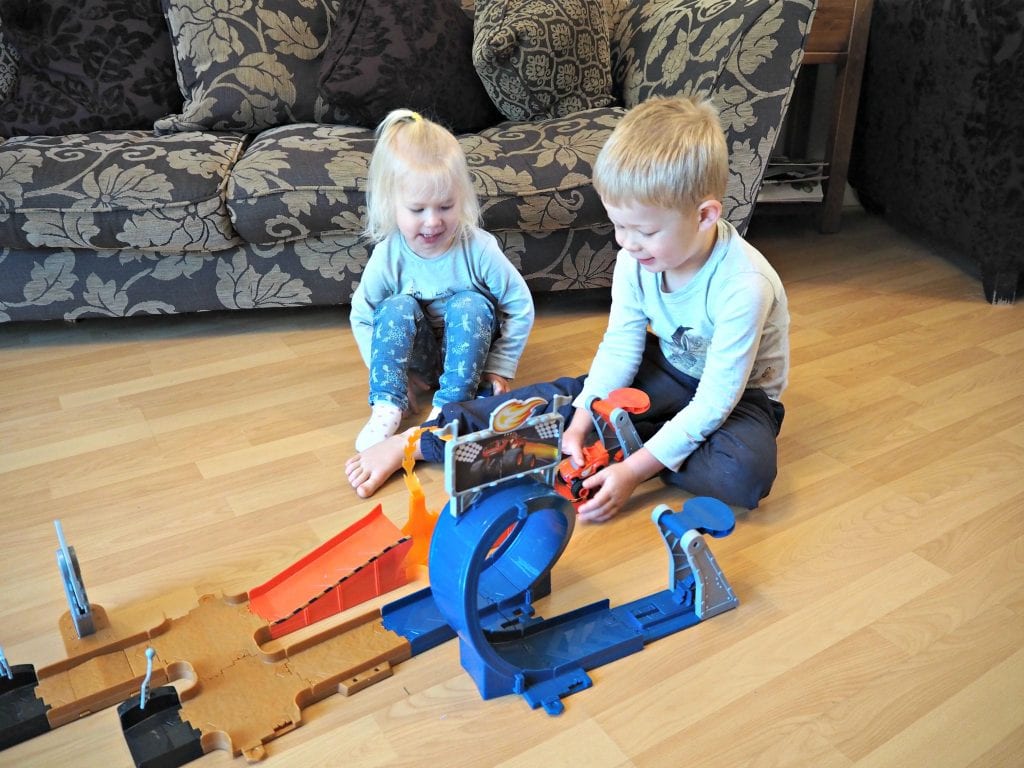 All the components are pretty well built with no plastic bits obviously waiting to be snapped off. I am not sure how long the launchers will last given that both kids have worked out that the harder they hit them, the faster the cars go. In terms of value, it’s tough, the set retails at around £29.99 which seems like a lot, but then kids’ toys are expensive. If it’s compared to something similar, like the Hot Wheels Monster Jam, you get more track and more cars for the same amount of money with the Fisher Price Blaze Monster Dome play set. So I think it’s good value compared to other, similar toys at this price point.

Comments from my co-reviewers are as follows:

“I do like it and it is quite good, but it can also be hard sometimes as you have to hit the launcher very hard to make the car go quickly” – Logan, nearly 5. 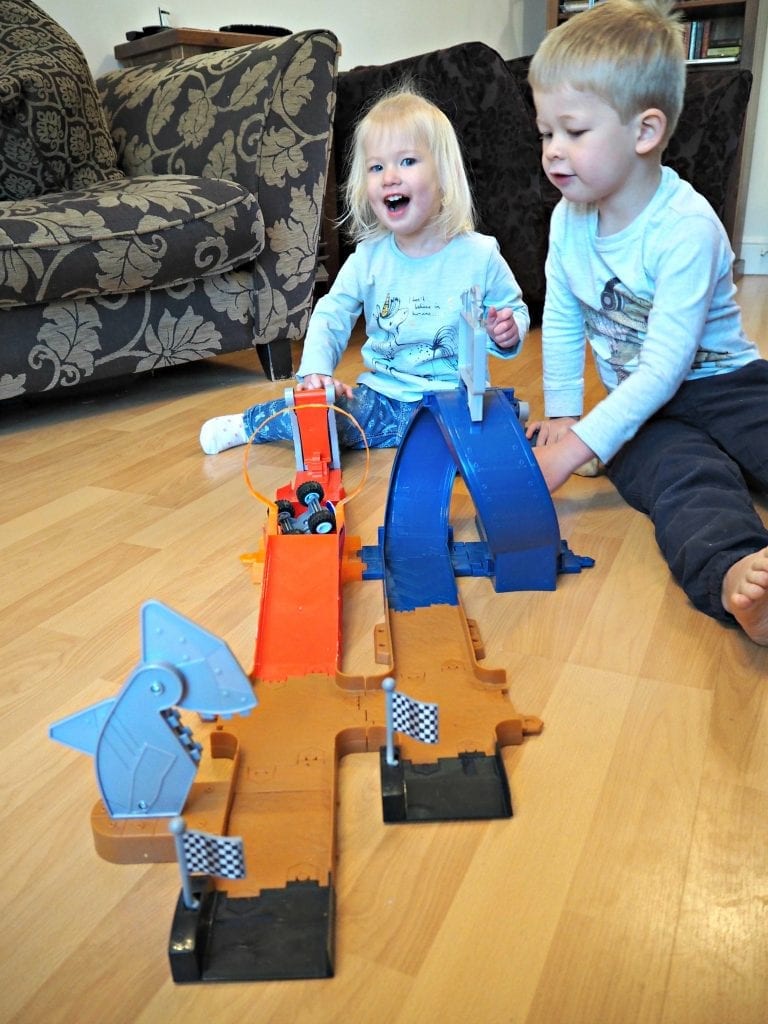 So it’s two thumbs up on the Dad side for value and minimal likelihood of having to glue it back together in the near future and four thumbs up from the kids for fun value. I would be happy if we’d got this for the kids for Christmas. The only downside, as there has to be one, is that it provides the children with a means of shooting toy cars into the bed of our long suffering dog, they haven’t worked that out yet but the dog did straight away. Wisely, she left the room.

*Disclosure: We went sent the Fisher Price Blaze Monster Dome play set for the purpose of this review, however, all opinions are our own.