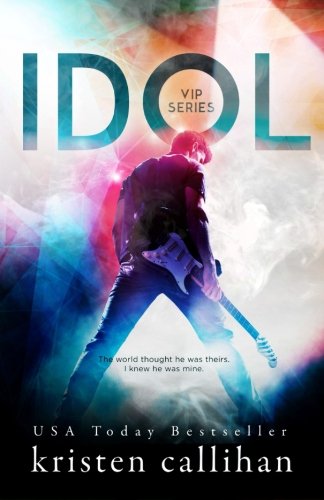 Rock star romances have become my thing lately. I cannot resist the allure of a sexy, famous rock star falling for an ordinary person. For some reason it’s even more compelling if said woman has absolutely no idea who said rock star is.

Idol by Kristen Callihan was recommended to me on Amazon a little while ago, clever little thing that Amazon algorithm and I couldn’t resist a one-click pre-order. The start of the book is cracking, drunk rock star passed out in a heap on the heroine’s lawn, what does the heroine do, hose him down. Brilliant. I was hooked straight away and at a certain time at night had to give myself a talking to to put the book down otherwise there was a good chance I would have read it until it was finished, sleep be damned.

The build up of the romance was quite frankly un-put-downable. Callihan built the tension, the relationship and the banter up between Killian and Libby perfectly. Rock god versus sharp tongued country bumpkin Libby was a delight to read and my favourite part of the book. And when we get to the actually get to the relationship part it’s smoking.

Of course, the inevitable dilemma of a rock star romance is how is the heroine going to fit into the heady world of sex, drugs and rock and roll. Will the relationship survive? Idol is no different. I was surprised on the slant it took and when we first met Libby, I can’t say anymore without spoiling things. It makes the story different. I never tired of Libby’s one-liners, she is funny and tough. Killian is a dark, brooding and at the same time funny hero that you really cannot resist.

The author’s love of music shines through in the book too, or perhaps she just just researched her subject very thoroughly. Referencing songs, musicians, guitar makes and styles in such a way it sent me off to google on a couple of occasions so that I could envision it in the story properly.

The supporting cast of characters were an important part of the story and it is clear that this is that start of a series, I was most disappointed that I couldn’t download the second instalment straight away. I’m far too impatient! But it will be going on my pre-order list. Callihan is an new to me author, but her writing sucked me in completely, so much so I have downloaded another book of hers from a different series to try next.

I guess if I was to have a criticism the issue the caused conflict between the two main characters was a little cliché in part and frustrating. But in terms of the latter, part I suspect it was meant to be. But other than that I loved it and I am already mentally drumming my things waiting for the next one.

If you love a good rock star romance, then this is definitely one to add to your list. Addictive writing, smoking chemistry and a rock star and heroine who will steal your heart. One of my favourites of the summer. I will definitely be reading more from Callihan.

*Disclosure: I purchased this book myself.