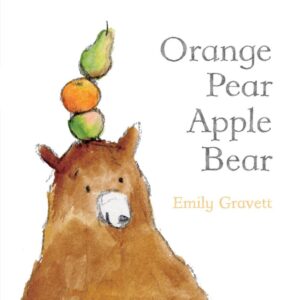 Orange Pear Apple Bear is a book that’s rather simplistic. I have to confess, the first time I read I did have a – is that it? – moment. There really isn’t that much to the story. In fact, it only uses four whole words through the entire book. Yes, four words.

However, the combination of these four words. Which, if you haven’t guessed already is ‘orange, pear, apple, bear’ – combined with that author’s illustrations makes it imaginatively fun. You’re going to have to trust me on this, but it does work. From the bear that looks like an pear, or is that an apple that looks like and orange. You get the gist.

It’s one of those the books that the more you read it, the more you enjoy it. As I say, the first time I read it, I wasn’t sure about it. Then my children asked to read it again, and again. And before I knew it we were all chuckling away at the silly rhyming words and trying to work out what was happening in each of the pictures.

I would say that due to the nature of the book that it is more suitable for younger children. But my four year old son did have a giggle at it.

A fun, simply but creative book that young children will really enjoy.