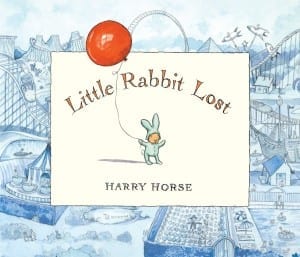 After my daughter was born, when my son was around 2.5 years, he developed this really scary habit of running away from me. It was usually when I was distracted with the baby, as soon as I was momentarily occupied he would just bolt. It was really worrying and stressful, as I’m sure you can imagine. At a bit of a loss as to what to do, I decided to research some books which might help to explain to him the consequences of what he was doing, rather than him seeing it as a game where he got Mummy’s attention because she ended up chasing him.

My research came up with two books of which Little Rabbit Lost was one of them, and in my opinion the best of the two. The setting of Little Rabbit Lost is a theme park and as we live local to Legoland and are fortunate enough to have a season ticket, it was particularly appropriate.

The story is of a little rabbit waking up on his birthday and proclaiming that he’s ‘a big rabbit now’ which is his response to his parent’s whenever they warn him not to go too far when they go to Rabbit World for the day. The day is full of lots of adventures, but naturally poor little rabbit learns the hard way the perils of not staying close to your parents. This was obviously the part I want my son to learn and understand about. We used this to talk about how Little Rabbit must be feeling and what it would be like to not be able to find your Mummy or Daddy. The first time he actually got a little tearful and then I wondered if I had driven home the point too hard, but it was really starting to scare me. I was actually surprised at how much my son took the book to heart at the time. We read it several days in a row and the next time he went to run off, I said to him remember what happened to Little Rabbit Lost, and much to my amazement it really, really worked. It made him stop and consider and after that he never did run or bolt off again.

Two years on he still likes this book and asks me to read it to him, when he gets excited and runs off to see something – usually at Legoland – if he is going through a not listening phase and it always helps him remember the consequences.

I would say this book is quite wordy for a 2.5 year old, which my son was at the time I purchased this book originally. I used to abbreviate it as I read it, now he is four I no longer need to do this.

Another aspect of the book I liked is within the illustrations whenever Little Rabbit is depicted in the book, he is carrying a red balloon which was a birthday present. It gives a really good visual representation for your child to see where in the book Little Rabbit is, and where he is in relation to his family too.

I’m not going to say this is a miracle book in the least. But, for my son he needed to understand the consequences of his crazy running off. This book gave me an easy and understandable way for him to grasp this and for that reason was invaluable.