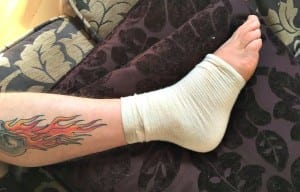 I’ve done it again, trained on an injury and the net result is that I can’t run all weekend, at the very least. This is the third time this year I have done this. I know this makes me an idiot but I’m genuinely baffled by why I do this. My pattern is that I’ll pick up a minor injury, ignore the injury, make it worse and eventually have to take a major break. The question is, why do I do this?

It’s not about lack of experience, I’ve been working out for a good few years now and so I’m no stranger to the physio’s couch. I know how long it can take to heal ligament damage. I know that running with ligament problems can make subsequent issues more likely. The ligaments are used by the body to sense the environment, if they’re damaged the body compensates with other senses, but if your attention and consciousness is diverted elsewhere you can slip or fall easily as the ligaments aren’t providing information to the rest of the body. So there’s no issue in terms of the intellectual side.

It’s not about humility and admitting I need a break. While I’m not saying I’m devoid of ego, I can say that I’m past the stage where my ego causes me to act in ways that are damaging to me. I’m not afraid to tell people I’m hurt (they can usually guess by the limping) and frankly that’s less embarrassing than the constant admissions that I could have got better sooner but chose to prolong things instead. That really does make me feel stupid.

No, it’s about obsession. I run on injuries because a big driver in my exercise is a need to sate the obsessional sides to my personality. In that past I have done this in much more destructive ways so it could be worse, but it’s still a part of myself I really don’t like seeing. It’s not the only reason I work out. I genuinely love running as I’ve blogged about before, but the fact that the thought of not running freaks me out indicates there’s a darker side. I’ve learned that regardless of my commitment (which is fine) or my enjoyment (also fine) that compulsive element, to anything really, never comes from a healthy place. I mean, what kind of person does things with their leisure time because they feel they have to. It’s not a good way to be.

So what to do? For me, the answer is to fight back against the compulsion. This only becomes an issue when I’m running on an injury, so that’s when I need to be extra vigilant, training in and of itself is a healthy thing for me to do. So when I’m injured, step one is to admit that to myself, sounds simple right? This week I ran twice on the logic that because I could not see *why* my ankle was hurting it could not be serious. I’m lying to myself there and I need to stop. Once I’m able to be honest with myself I can start being honest with the people around me. Rather than ‘I’m fine’ (which as a statement is one of the top ten lies of all time) I say ‘my ankle hurts today’. Then people will ask why I am still putting on my running shoes. Finally I ask myself ‘what do other people see here?’. I’m really passionate about exercise and love that my wife and kids are starting to get into it too; what do they see when I do this? Does this look to them like something they would like to be part of? Is my son learning a positive lesson about being a man? He’s certainly learning a lesson, but is it one that will help him? Of course not.

So next time (and there will be a next time, I’m always getting injured – though rarely when racing) I need to admit I’m hurt sooner. I need to talk about being injured sooner and I need to remember that when I feel compelled to do something, that is never coming from a good place. I can’t promise to get it right next time because I’m a work in progress, but what I can say is that this time was a little better than the last, and next time it’ll be better still.

It’s about progress, not perfection.