Welcome to a new, regular feature where I talk about the recipes I love to cook, the chefs who came up with them and my love of food in general. First up is a great new lunch time meal I have discovered.

I like to run at lunchtime and so while I want a light lunch I also want something substantial and filling. My most recent solution has been to revert to that most venerable of student staples, the Pot Noodle. Pot Noodles are great in that they are relatively low calorie and quite filling but they do taste pretty gross and they’re jam packed full of salt.

The boy and I often enjoy watching the odd cooking show together on the weekend and so it was we happened to be watching Hugh Fearnley Whittingstall’s River Cottage Veg show a couple of weeks back. Hugh’s mission in that show was to spend a summer without eating any flesh at all. While I’m not so interested in that, I was very interested in a lunch idea he had making a home made pot noodle. Not only was this altogether more wholesome than the bought variety, it looked like a bit of fun to make. So I had a go and was super impressed.

I’m not a TV chef (open to offers though) and so my time to prepare food at lunch is limited so I adapted Hugh’s recipe for mass production and evening before preparation. Here’s the recipe (for a week of noodle goodness)

5 x 0.5L Kilner jars (I got mine from Waitrose)
Food processor with bowl blade
5 tupperware boxes
Mandolin with julienne attachment 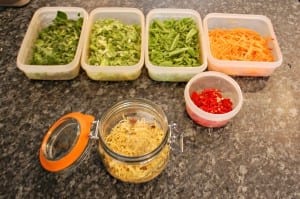 Line up the Kilner jars and put a nest of noodles in each one. I then crush them a bit with my fingers so I can get more vegetables in there.

In each jar put a small pinch of sugar and a teaspoon of stock powder.

Wash sugar snaps and then shred in the food processor, put into a tupperware box.

Wash and shred spring onions, box up as before.

Finely chop chillis with a knife and box up.

Using the mandolin (or a knife if you enjoy having fingers with skin on) julienne the carrots. I think this is important as the carrot would not shred up nicely like the other veg (I shred carrot in the food processor as a base for bolognese and it comes out very fine, in this dish, it’s nice to have little sticks of carrot)

The night before work 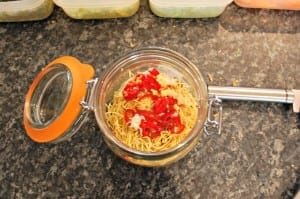 Get one of your jars and using a garlic press squeeze a glove of garlic in. Inpired by the mighty Jamie Oliver I don’t bother peeling the garlic (thank heavens for 15 minute meals)

If you can be bothered grate in some ginger, I tend not to bother as it doesn’t grate very well and I’m not convinced it adds a huge amount of flavour.

Now dump in some chilli.

Then layer the veg in so that the pot is nice and full. Seal it up and put everything back in the fridge. Try and keep in the fridge at work if you have one, if not in a bag under your desk should be ok. 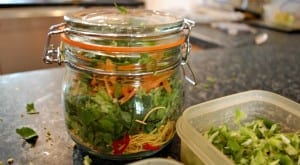 Nip out to the kettle and boil it with a good amount of water in. Hugh FW says pour in boiling water but even with heat treated jars like Kilners I shy away from this. So, let it come off the boil and pour in to the jar so that the noodles are covered. How much you pour in is up to you, make sure it’s enough to cook the noodles but be aware that the more water you put in, the thinner the broth.

Pot noodles have a thickener in to make the sauce thicken up, I may try popping in a little Xanthan gum to see if I can mimic that.

Stir the noodles then put the jar lid down and seal. Let it brew for 10 minutes stirring occasionally then eat with a big satisfied grin on your face. Add the soy sauce to taste.

It’s a great lunch, super filling and on My Fitness Pal I worked it out as about 250 calories, it also adapts well to weekend prep and so doesn’t take huge amount of time on the night before work.

I need to check out Xanthan gum to thicken and possibly some flavour changes, I reckon toasted cashews or peanuts would be nice (perhaps added after the noodle has stewed) maybe also try different sauces such as hoy sin or a bit of fish sauce.

Hugh FW also suggested squeezing limes in but seriously, who has limes in their desk at work?

I had a go with Xanthan gum today and it works really well.  Add half a teaspoon to the dry ingredient mix and make sure you stir well while the noodle is brewing and the result is a lovely unctuous, sticky broth, exactly right for my tastes.