As part of National Storytelling Day, Room to Grow set several bloggers a challenge. We each had to set each other a character, setting and object and with the help of our children write a childrens’ story.

As a lover of books and writing I thought that this sounded like great fun.

We were set the following theme:

Character: Chia the Healthy Troll
Setting: A rundown castle on the outskirts of Trueburg (which is the capital city)
Object: Magical potatoes

Now  my son, who is slightly obsessed with vacuum cleaners, insisted I write them in, so I just went with it! Here’s our story.

by Laura and Logan (aged 3) 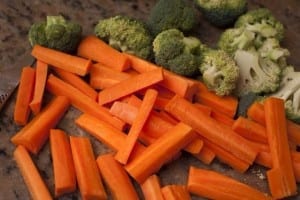 Chia the troll had a secret. It was a big secret. Because unlike all of the other trolls he hated junk food. No chocolate or crisps for him, oh no. Because he loved vegetables. Yummy scrummy vegetables. Carrots were his favourite, all crunchy and orange and delicious.

Trolls were not supposed to like vegetables you see. They mainly liked meat, but all trolls loved cakes, crisps, chocolate and biscuits. Have you ever gone to eat a biscuit and it has suddenly disappeared? That’s probably because a troll has stolen it when you’re not looking. Trolls are sneaky like that.

Chia lived in a castle on the outskirts of Trueburg, the capital city of Troll Land with his eight sisters and nine brothers. But the castle was very dirty and the walls were starting to fall down. His brothers and sisters were so busy trying to steal cakes and biscuits that they forgot to clean up and look after the castle properly. Only last week the curtains on Chia’s window were so old they fell off. This made Chia sad.

One night, when Chia was hiding under the covers eating a lovely piece of cucumber a magical fairy appeared.
“Hello Chia'” she said.
She had bright green hair and Chia liked her very much.
“Hello'” said Chia, crunching away at his cucumber.
“I am the Fairy of Healthy Eating, and I have seen what lovely vegetables you’re always eating and I am very proud of you.”
Chia felt his chest puff out, he felt very happy.
“Because you are the best eating troll I have ever seen, I am going to rename you with a special new name. From now on I am going to call you. Chia the healthy troll.”
“Ooh” said Chia, “I love that name”.
The fairy gave him a big smile.
“I also have a present just for you.”
“Ooh I love presents,” said Chia.
The fairy opened her bag and gave Chia two very big potatoes.
“Potatoes!” said Chia, “yummy!”
“These aren’t just any potatoes,” the fairy told him. “These are magical potatoes, you must use them wisely. They’re not for eating.”
Chia wondered what you should do with potatoes if you don’t eat them, but when he looked up to ask the fairy she disappeared in a puff of green sparkly dust.

All night long Chia slept with the magical potatoes under his pillow and couldn’t decide what to do with them. Then in the morning he woke up and had an idea. After breakfast, he hurried out into the garden and buried them in the soil in the sunshine.

For seven days, Chia woke up every morning and went to check on his potatoes and watered them from his red watering can. But nothing happened. Then one day Chia heard his brothers and sisters shouting in the garden. He hurried out and saw the most amazing thing. Where he had planted the potatoes stood three giant mops and four vacuum cleaners, all painted in purple and orange.
“Wow,” said Chia, because purple and orange were his very, very favourite colours.
Then something even more amazing happened. They started moving ON THEIR OWN!

They started cleaning and fixing. As Chia and his brothers and sisters watched the mops and vacuum cleaners began to repair the castle and made it all sparkly and clean. When Chia went into his room he even discovered brand new orange and purple striped curtains hanging at the windows with carrots on them. It was one of the best things he had ever seen. Even Chia’s brothers and sisters had lovely new bedrooms, their castle looked absolutely marvellous. Fit for a king, or a healthy troll.

When they had finished doing their job Chia watched as the mops and vacuum cleaners disappeared in a sprinkle of green fairy dust and went back into the soil where he had planted the magical potatoes. That night Chia went to bed thinking he was the happiest and most healthiest troll in the world. But breakfast time brought with it another amazing surprise.

Around the castle an enormous and gigantic vegetable patch had appeared. Filled with turnips, swedes, cauliflowers, green beans, broccoli, cabbages, carrots and of course potatoes. Chia’s tummy started rumbling in delight. There was also a new plant that he had never seen before, which had a little note attached to it.

Dear Chia,
This is a sage plant and you can eat its seeds. Because you are the healthiest troll in the world, all the other fairies and I have decided to name the seeds after you. They are Chia seeds.
I hope you like them.
Love the Fairy of Healthy Eating x

And Chia discovered the seeds were even more yummy than vegetables.

Some other fab bloggers have joined in on this too, check out their stories:

I will add more links as different stories go live 🙂