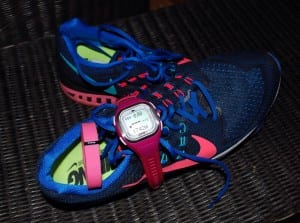 It is with a sense of weary defeat that I strap the activity tracker back onto my wrist. At work they have started a ‘wellness programme’, we have to measure every step we take, our ‘active minutes’, we’re even graded on the quality and amount of sleep we get. With two young kids the amount of sleep I get is minimal and the quality is poor but believe me every minute is precious and seeing it on an internet based dashboard outlined in red, letting me know that I’m an official zombie doesn’t help. If slurred words, a staggering gait and a growing hunger for brains hadn’t drilled the message in, a constant bluetooth sync from the sylish band on my arm to my phone won’t either.

But it doesn’t stop there. My runs are GPS tracked and uploaded into the computer weekly. I can see my average speed, distance and even where I went (courtesy of Google Earth). When I use the heart monitor I can even see my maximum and average heart rates and calculate a calorie value for the run I just did. In a very real sense, every step I take, every move I make, something is watching me. Data is everywhere. Gone are the times when it was just me, alone in the forest enjoying the fresh air and a workout and I wonder, have I become a slave to the data?

It started with the Fitbit about a year ago. My employer wanted us to be more ‘well’ and being American and anxious not to imply we were being forced into anything simply gave us activity trackers and therefore the opportunity to see how active, or not we were being. Periodically we were given the opportunity to compete against other teams or countries in light hearted contests, by this time my daughter had arrived and so thankfully we were competing on steps not sleep! It turned out to be fun. Walking my trusty companion Florence in the morning would normally secure 4 thousand steps before breakfast and soon enough badges for 10, 15, 20 and even 25 thousand steps in a day were proudly displayed on my internet dashboard (and, of course, bragged about to work colleagues).

And then came the GPS. Aldi had a wristwatch style GPS for a price too good to ignore. I had to have one, particularly as it came in a rather amazing shade of pink. I was hooked, wherever I ran or rode I could see all the statistics, the routes and roads I’d taken, everything. It was a whole new world and I geeked out on it big time.

But the more I geeked out the more the data got its hooks into me. The interminable wait while the GPS acquired its satellites, the rage I felt when the connection with the heart monitor dropped out mid run rendering the dataset incomplete. And then came the 6 minute mile incident…

A normal run at lunch time felt quick. I’d had some nice pacey music on (Wormhole by Ed Rush and Optical if anyone cares) and I knew I was in a good groove. I came back and looked at the data (straight away before the stretch as always) and there it was, not just quick, into the sub 7 minute miles. For me that represented a major jump in pace. Now that’s not unusual with my training, sometimes things just seem to come together but even still, it was a big leap. I set out the next day to repeat the feat, same run, same kit, same food that day even the same tunes and there it was, same digits. I was elated. I knew Mo Farah like graceful loping was within my grasp. This was a shorter run and so I knew the focus going forward was to be pushing the distance further to be able to maintain that over 15 – 20km.

Then I got home and uploaded the maps and I saw it, the device must have picked up a wrong satellite or something as on both runs it had me popping down the road about 1km in a direction I didn’t go at a near relatavistic velocities. In short the data was wrong. I’d got low in the 7 minute miles (a speed which runner friends assured me was not to be sniffed at) but that golden 6 minute mile was a mistake, an abberation, no, let’s be honest, a lie. The watch lied to me and as a result of that lie, for a moment I thought I was an olympian instead of just ‘quite quick’.

Like all love affairs that blow up out of nowhere to face melting intensity, the break up was bad. The data and I didn’t speak for a few days and after that only to decide who’d get to run on Saturdays and who could have custody of the dog (as if I’d let anyone take Florence, duh).

Data had breezed in, taken over my life and let me down. We were done. So when the next ‘wellness initiative’ came along (read step contest) it was the last thing I wanted in my life, but, being in a team means taking part so I dug out the activity tracker and strapped it to my wrist vowing to ignore any flashing lights or dashboards and to chuck it once the step contest was over.

As I was driving to work that morning, I noted that the Today show had started doing their newspaper review before I’d got out of town, damn, at that point I knew I was running late. This fact was only confirmed for me when I met the black Mustang coming over the brow of the hill near work, if I’m on time he’s only just turning off the main road when I meet him (him as I’d hope women are too smart to drive a car famed for its inability to turn corners or get anywhere without a supertankers worth of fuel in the UK). I should have realised that I was off schedule when I came back from walking the dog and chatty Dave’s van had already left its parking spot, I’d usually wave to him as I made my way home.

It made me realise that, like it or not, I collect data all the time and I use that data to measure where I am in space and time and compare those measurements to historical data to see how I’m doing today. As measurements go, a GPS is probably a lot more accurate than chatty Dave’s van and mean position of middle aged Mustang man, not the Today show of course, Radio 4 is like an atomic clock but you get my point.

The issue is, I’ve become obsessed with data and I’ve stopped using it as a way of describing what I was doing and let it become the reason I’m doing it. I don’t run to hit a certain pace, I run because there’s no finer way to spend your lunch hour than pounding some asphalt in the company of late 90s drum and bass and no finer way to spend an hour or two on a Saturday than leashed to an insane Rhodesian Ridgeback blazing a trail through my local forest. But there’s even no harm in finding out how far that trail was, and whether it was quicker than last week as long as the idea that if the data is missing or incomplete it invalidates the effort doesn’t creep in.

So I might forgive the GPS for its moment of weakness, for a couple of days it allowed me to think I was really rather fast and I liked that and let us not forget it is bright pink and matches my Nikes. So data and I are started afresh, keeping what was good about last time and avoiding past mistakes.

As for the activity tracker, well, I found you can buy replacement bands for that on ebay for not very much money. Turning it from dull black to my usual shade of hot pink has made that a lot easier to bear too.

It would be amazing if you wouldn’t mind voting for me?