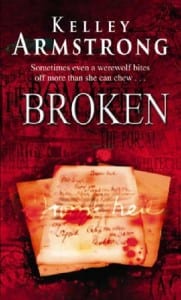 I love the Werewolf Women of the Otherworld series written by Kelley Armstrong. Bitten, lent to me by my sister, was the first book of the supernatural genre that I ever read and I have been hooked ever since.

Broken is the third in the series following Elena Michaels and her partner Clayton Danvers in a world of werewolves, vampires, demons, sorcerers and other supernaturals.

Elena is the only female werewolf in existence and now heavily pregnant she is extremely vulnerable to the rest of the supernatural community. In this book, we see Elena heavily shielded by her pack and extreme frustration for Elena’s strong independent character, especially in her male dominated world.

Elena, Clayton and the rest of the pack agree to retrieve a letter for a half-demon friend Xavier, in return for the whereabouts of a murdering werewolf mutt. The letter is believed to be a ‘from hell’ letter written by Jack the Ripper and stolen by a sorcerer.

Elena accidentally triggers a spell on the letter opening a portal in Toronto from Victorian London, causing Toronto to receive all sorts of nasty visitors including zombies, killer rats and cholera. Elena and her pack stay in Toronto to close the portal, encountering a mixture of supernatural characters that leave you guessing who the bad guy is. It soon becomes clear that the heavily pregnant Elena is the link to the portal and therefore the target while Clay’s efforts to protect Elena and his unborn child leave him fighting for his life. We see Elena’s character empowered as her internal instinct kicks in and she fights to save her family and therefore reassert her independence.

An action packed book that is easy to read and will keep you turning the page. Toronto is a good setting for the book, allowing the story to revisit events in earlier books and fill in a few missing gaps.

I enjoy the primal, intense relationship between Elena and Clay but with the third book in the series I’d love to see the author delve more deeply into the characters. I find at times their relationship is a bit too perfect. I’d love the author to bring out a little of Clays darkside, the darkside that made him turn Elena into a werewolf. I found some of their romp scenes a little monotonous and dull, I understand that the author was trying to demonstrate their passion for each other but I think they needed more deep and meaningful rather than lots of energetic shags!

Unfortunately my knowledge of Jack the Ripper isn’t extensive so I suspect that a lot of the references used in the book were lost on me and had I know more about him, it may have captured my imagination more.

The book is full of fighting action scenes from the start and never lulls as some books can. However, I felt that towards the end I did find some of the event scenes a little repetitive. I also felt there was a huge build up throughout the book to the birth and I had high hopes for a page turning dramatic scene and was disappointed to find this tacked onto the end.

The negative points are minor and I would recommend this as a good read.