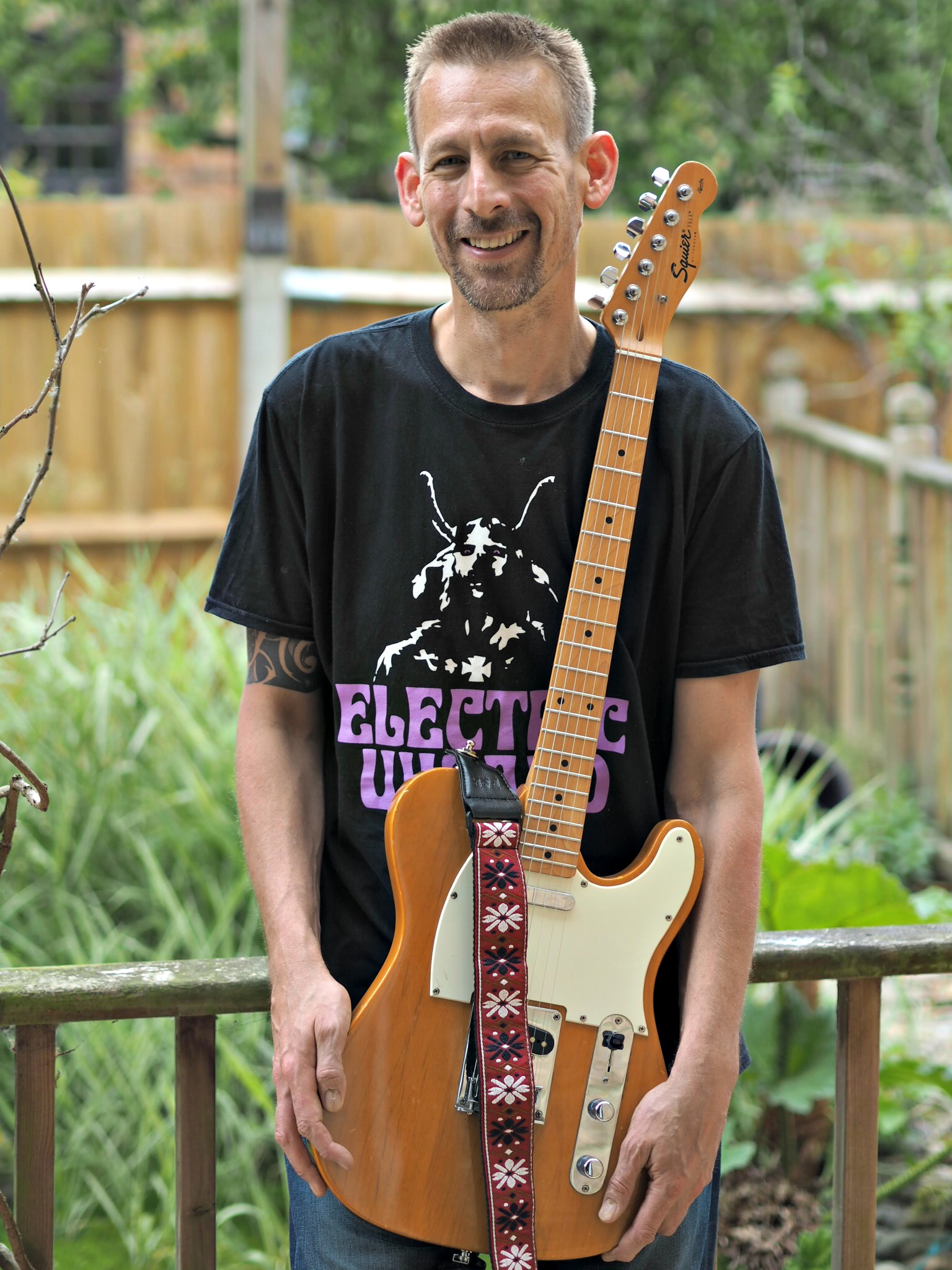 If you read my blog post last week, I was mid way through renovating my cousins Squier Telecaster. I’d recommend you go and read the first article, before this one as it will make much more sense!

So, today I did the job I’d been dreading, the frets.  Fret sprouting occurs when the guitar has been kept in a very dry environment, like a loft.  The wood of the neck contracts and the metal of the frets does not, leading to slight bumps along the sides of the neck.  The solution is to file them back very slightly.  This is a 3 stage process, first, the main filing, then adding the angle back on with an emery board and finally using a round file just to re-taper the edges.  I’m still waiting on a set of luthier files so I only did stages 1 and 2 today.  Being honest, the idea of going anywhere near a musical instrument with a file is the stuff of nightmares to me, but in for a penny in for a pound. 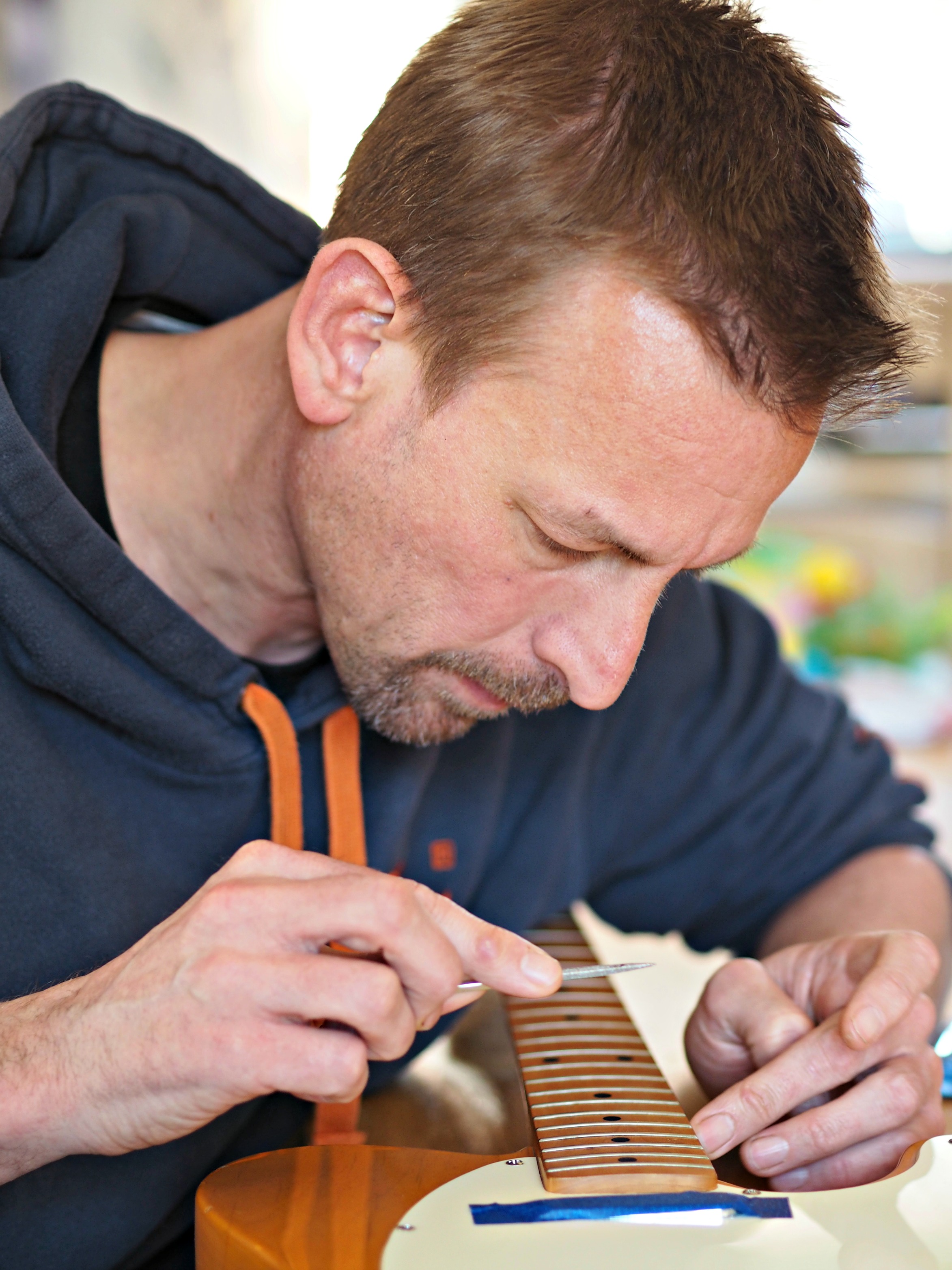 I’d left the masking I put on to protect the fingerboard in place.  In addition I ran a strip of tape along the edges of the neck and pressed it down as hard as I could with my thumb.  Next I took a fine file and ran it smoothly up the neck, the idea being that where the fret was sticking out slightly the file would take off the tape and the metal and the fingerboard would be safe under the tape.  It seemed to work ok, there were a couple of scratches on the underside of the neck but they looked OK when I rubbed the neck down with a cloth.  Then, using the emery board (fine side) I took off the any burrs.

I had brief thoughts about de-glossing the neck but at this stage I decided against for 2 reasons; first, I’ve not played the guitar enough to really have a strong feeling on the neck; second, this project is about restoration rather than modification.  It came down to me thinking it might be an idea to de-gloss the neck because I recently read an article on how to do it.  If I feel like I want to do it when I replace the pickups, I might reconsider.  So, for today I was done.

The special files arrived today and predictably they are rubbish, they did the job but not very well.  That being said, a set of files for £10 is not likely to be good quality, if I do more things like this I will probably invest.  So I finished the ends of the frets and they seem pretty good now.  As I had the guitar out I decided to have a crack at fitting the nut.  The new nut was wider and thicker than the original so I had to take some material off the sides and also thin it out.  I did the sides with one of the files as there was a lot of material to come off.  I also used the file to remove the tab on the underside of the nut.  This wasn’t on the original and would have meant the nut did not sit in the groove correctly.  To get the nut into the slot I put some 800 grit wet and dry paper on the table and rubbed the nut flat against it.  Once it slid in to the groove with minimal hassle I set about filing the sides.  My ham fisted-ness came into play here as I managed to nick the head of the guitar while filing, more care needed. 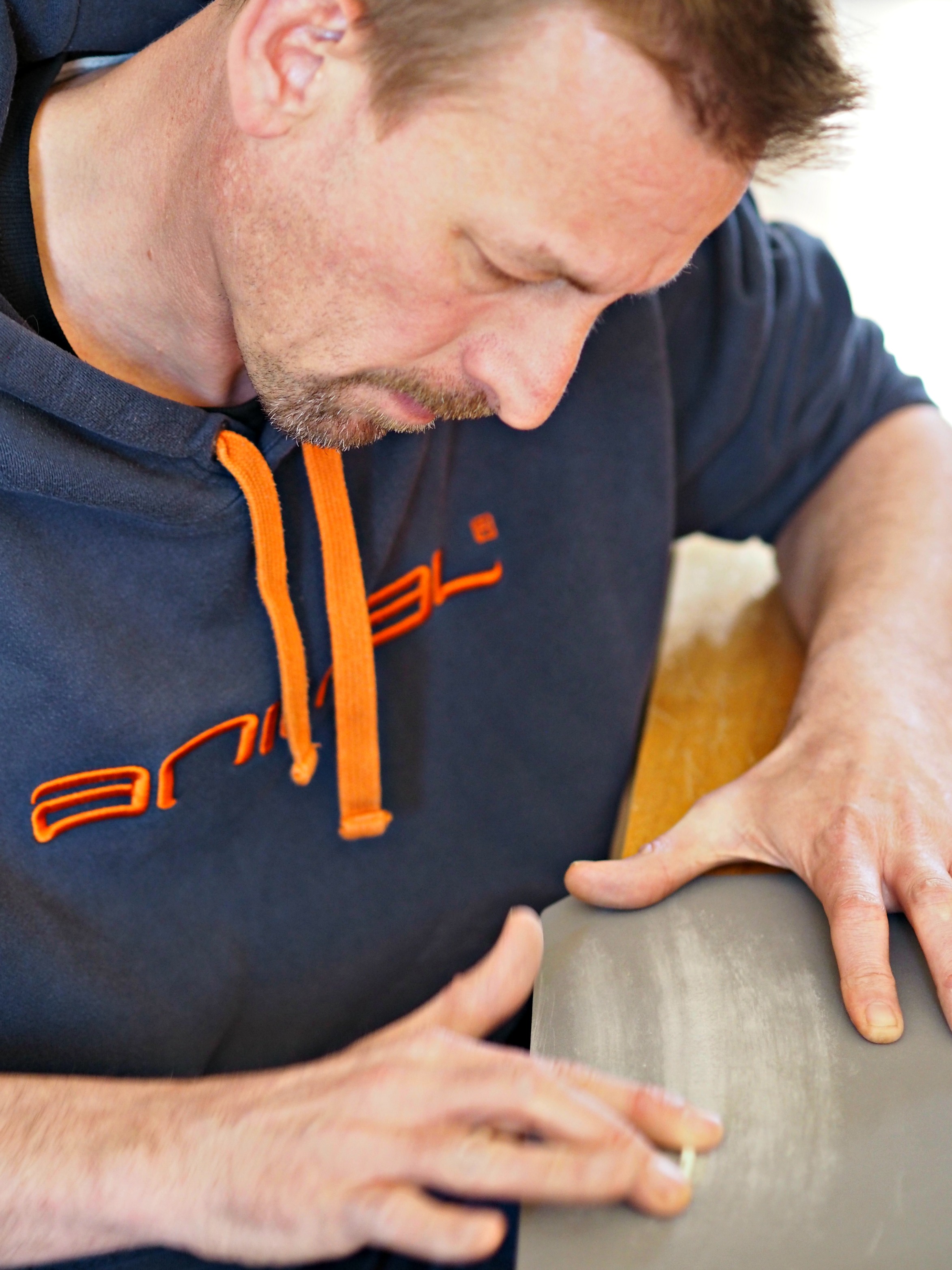 Once that was done, the moment of truth arrived.  I strung up the top and bottom E strings, brought them to pitch and checked the height of the nut.  I did this by fretting the string at 3rd fret and then measuring the distance between the top of first fret and the string.  This was nerve wracking, the neck (and nut) are radiused and I did not fancy trying to take off thousandths of inches by hand, the measurement is done with a feeler gauge and by jingo, it was cock on!  Last job of the day was to take the nut out again and put a little wood glue in the slot with a cocktail stick.  At that point I left the glue to set but, more importantly, quit before my luck ran out.  All that’s left to do is to finish restringing and put the two nice new control knobs on, and then have a go of course!

Actually, despite my best intentions I didn’t leave it there.  I waited for the nut to dry and then I restrung the guitar, but that was not all.  I decided to have a go at setting the intonation.  Intonation is setting the bridge saddles such that the open string and the string fretted at the 12th fret are perfectly in tune.  I’ve never done that before but then I have only recently started playing with people, so being in tune with anything has never been something I need to think about.  Now I’m jamming regularly with my friend Rob it’s more of an issue.  More than that though, as I’ve worked on this guitar I’ve wanted to get things right.  Yes, I could have left things as they were but even if I could not tell, I’d know.  So I resolved to have a little look at things and see where we stood.  Intonation is done last once the action is set and as I was happy with the action and the neck was true, the time was upon me. 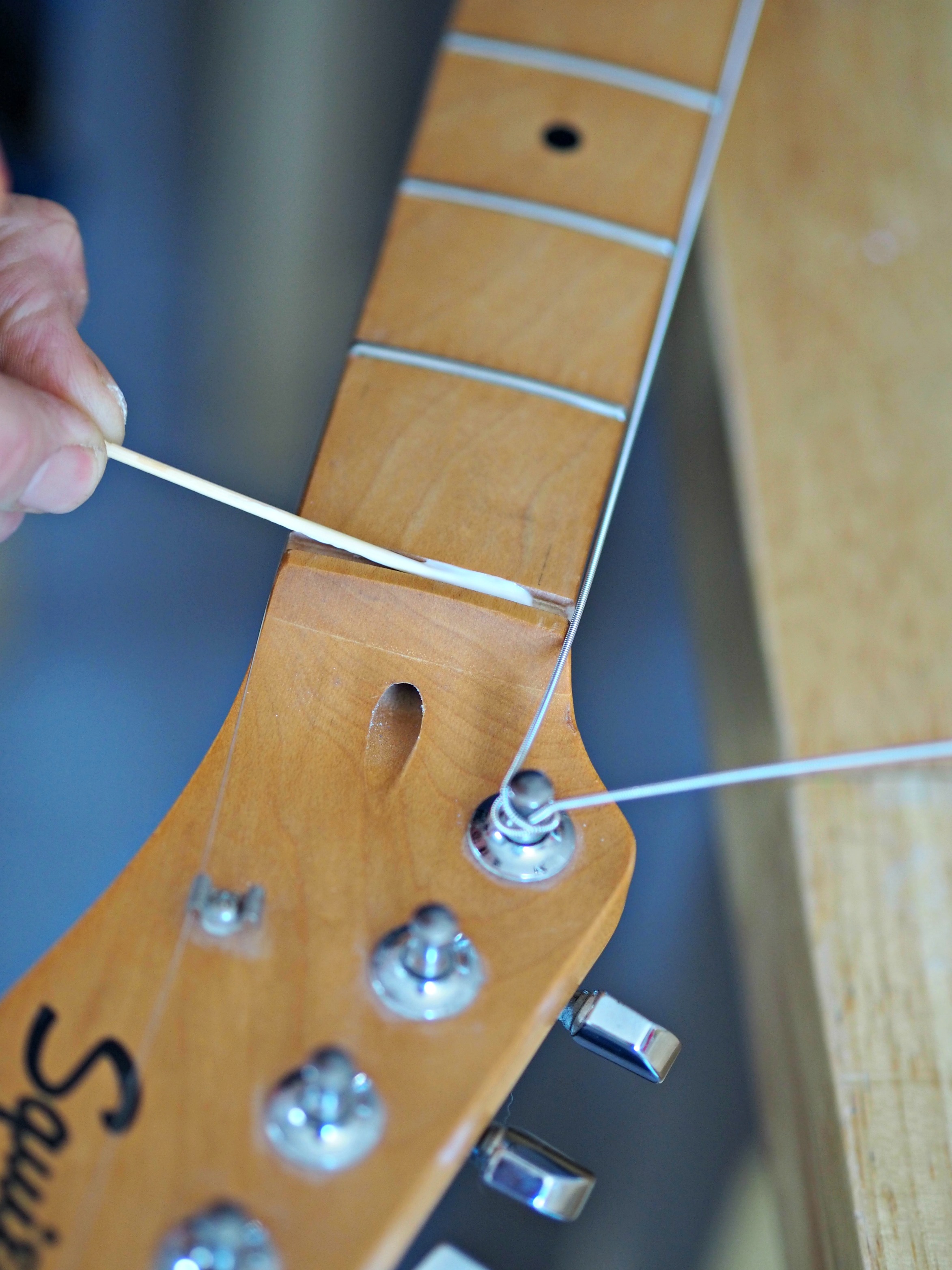 As I have said, intonation is making sure there is no difference between the string played open and the string fretted at 12th fret, if the note at 12th is sharp then the string length needs to be increased, if it is flat it needs to be decreased.  Luckily, this being a Fender type bridge, each string has an individual saddle which can be moved back and forward with the turn of a screw.

Initially this was very frustrating, it seemed like big adjustments were making very little difference but slowly I got the hang of things.  Most of the strings were sharp when played at 12th fret so I had to lengthen them by moving the saddles back towards the bridge.  After each small adjustment I had to then retune the string and re-check the intonation.  It was a laborious process but I was pleased that I did it, not only because I know the guitar is right now, also because I feel like I learned a little more about what I was doing. 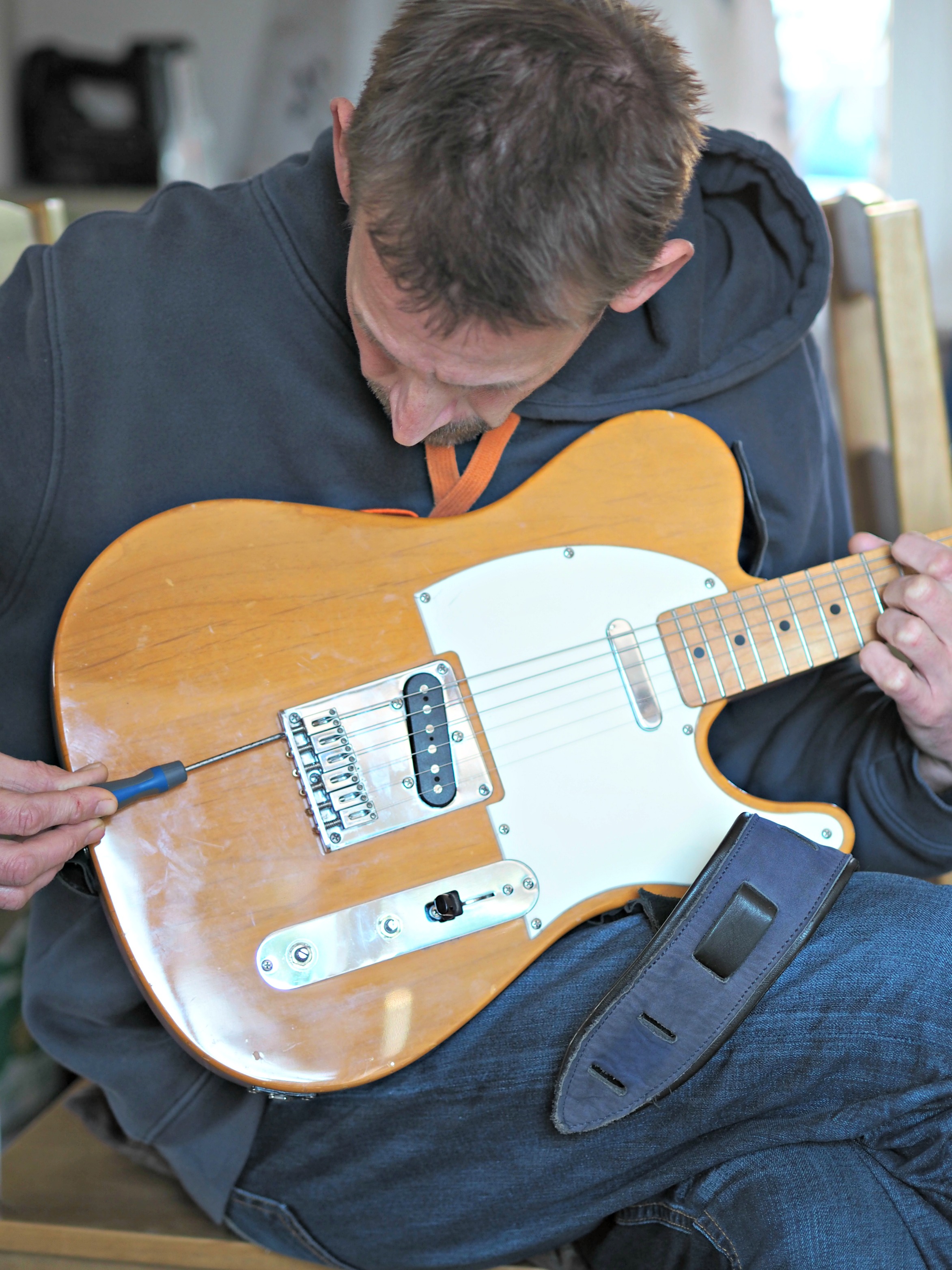 Tomorrow I’m going to put some new knobs on and order a nice looking strap and some straplocks from Wish and we’re done, hurrah!

It looks really nice with the new strap and strap locks and it plays like a charm.  I’m still 100% in love with the big chunk of wood feel of the body (no belly curves here) and the neck is nice and fast.  The action isn’t the lowest but I don’t like mega low action and the 10s feel like the right gauge, it holds tune very nicely though I probably won’t take this past D standard.

I do wonder, from time to time, what it would be like with hotter pickups but we’ll see about that once the wife has forgotten I spent on it this time round.  I could have bought a Tele second hand for what I spent, but I wouldn’t have had any fun and I have to say, it has been both interesting and quite a hoot doing all the stuff here.