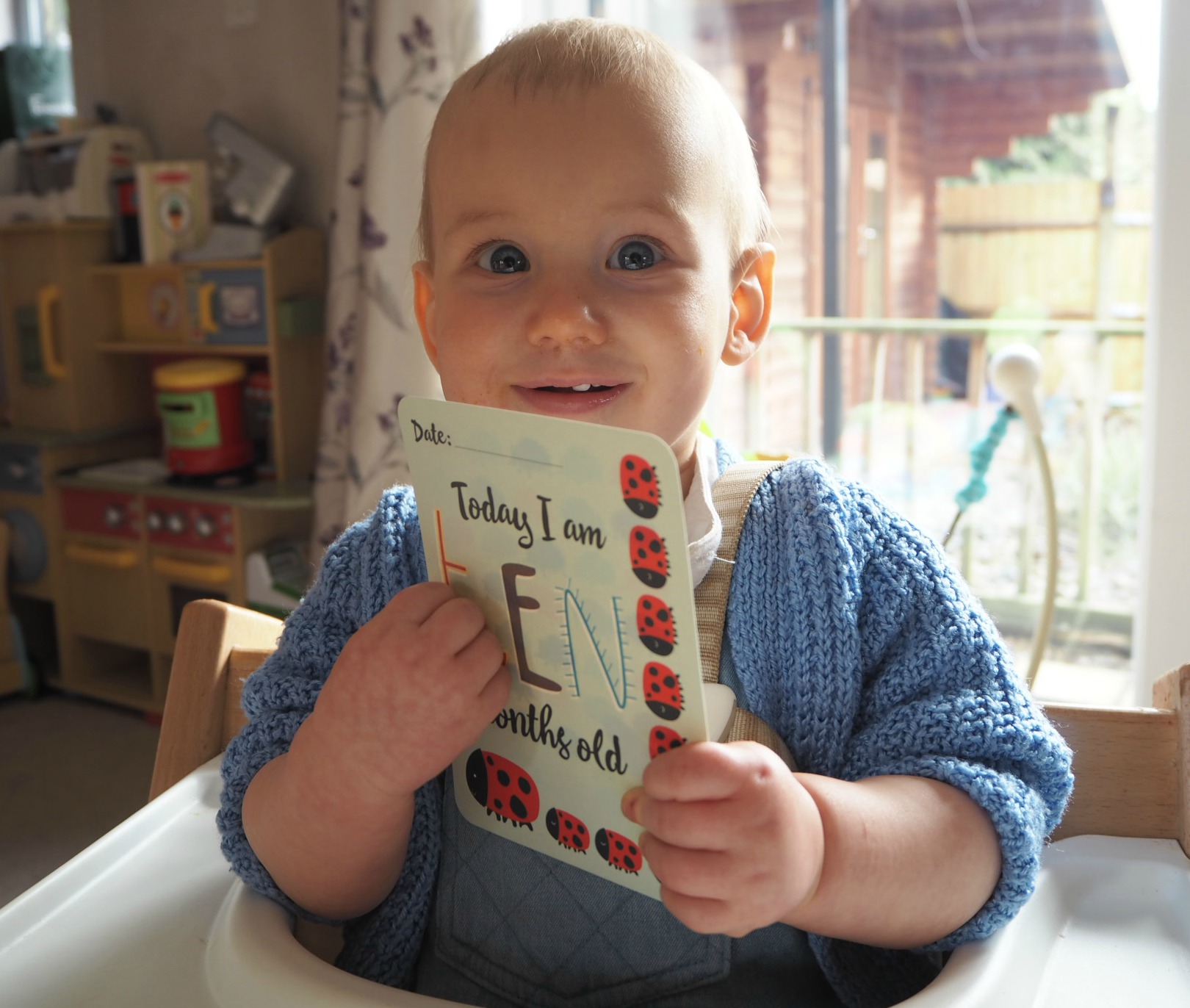 Oh he is changing so quickly now, I think Bohdi is starting to look more like a little boy and less like a baby the closer he gets to one year’s old. Month ten has been all about the moving! Crawling is pretty much down, we have some commando crawling still but he is up on his knees more and more now. Bodhi can easily put himself into a sitting position now too. He can pull himself up to his knees and his feet, which has meant we have had to drop the cot to its lowest setting. He has become a little bit of a monkey at nap times, as although he can pull himself up to standing, he can’t get himself back down again. Cue crying for me to get him down again and repeat. For a while putting him in his sleeping bag seemed to solve the problem, but he’s mastered standing in that now too, so we have to play a little game where I go in and put him down again and tell him it’s sleepy time and repeat until he finally gives in.

When he’s on the move he’s so fast and stubborn! You can take him away from something only to find him back there two seconds later, and he can move quite quickly if he thinks he can get to play in the dog’s water bowl before I catch him. Pretty much every and anything will go in his mouth, so I have to watch the carpet like a hawk when his older siblings are home. He also has a thing for wires and standing at the coffee table and chucking anything on there on the floor. 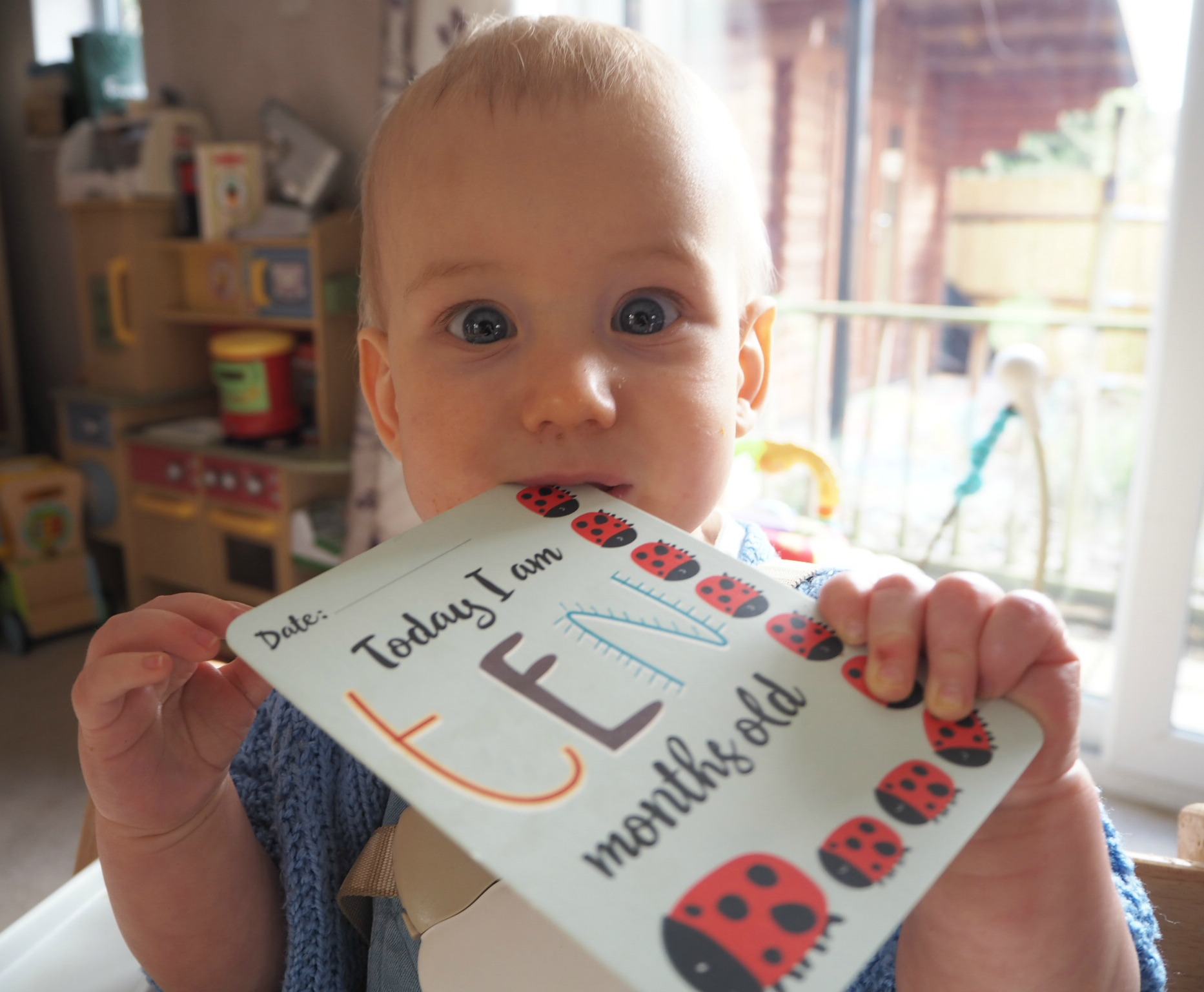 He’s absolutely fascinated with the guitar which both his Dad and big brother play. So much so that if he’s eating he won’t eat in favour of watching them. It’s actually very cute, and his Dad has a cheap old guitar which he puts on the floor for him to bash at and pluck the strings which he enjoys.

This month has seen the arrival of teeth number 5 and 6, they’re coming fast now! His speech is really developing too. We’ve got ‘Bo Bo’, “Da Da’, ‘Hello’ ‘Ma Ma’ ‘Ba Ba’, ‘Der Der’ I also think he is trying to say Logan and Aria at the moment. I think he might nearly be there with Logan, but yesterday morning was the first time I have heard a sound that sounds like Aria, although in fairness that is a trickier word to say.

We’re still breastfeeding and I am quite indecisive at to when I want to stop, I had thought a year, but I get sad about the thought of stopping so I may keep the night feed at least going on for a bit longer. We’ll see. He’s become a bit of a biter, so I may very well change my mind! He’s also still in our room and there are a few finishing bits to do in his bedroom and then I suspect we will move him out. Which is another thing that makes me sad, but I’ve noticed we’re starting to wake him more and more in the night. So if I have to get up to one of his siblings, or to just go to the toilet I can end up having to settle him a little. I also think it may be time to drop the evening bottle (at about 10pm) and that’s hard to do when he’s in our bedroom as we often wake him when we come to bed ourselves, so it’s starting to feel like it might be time soon.

That’s it for month ten, but Bodhi is such a happy, smiley baby and it’s such a joy to have him in our lives.