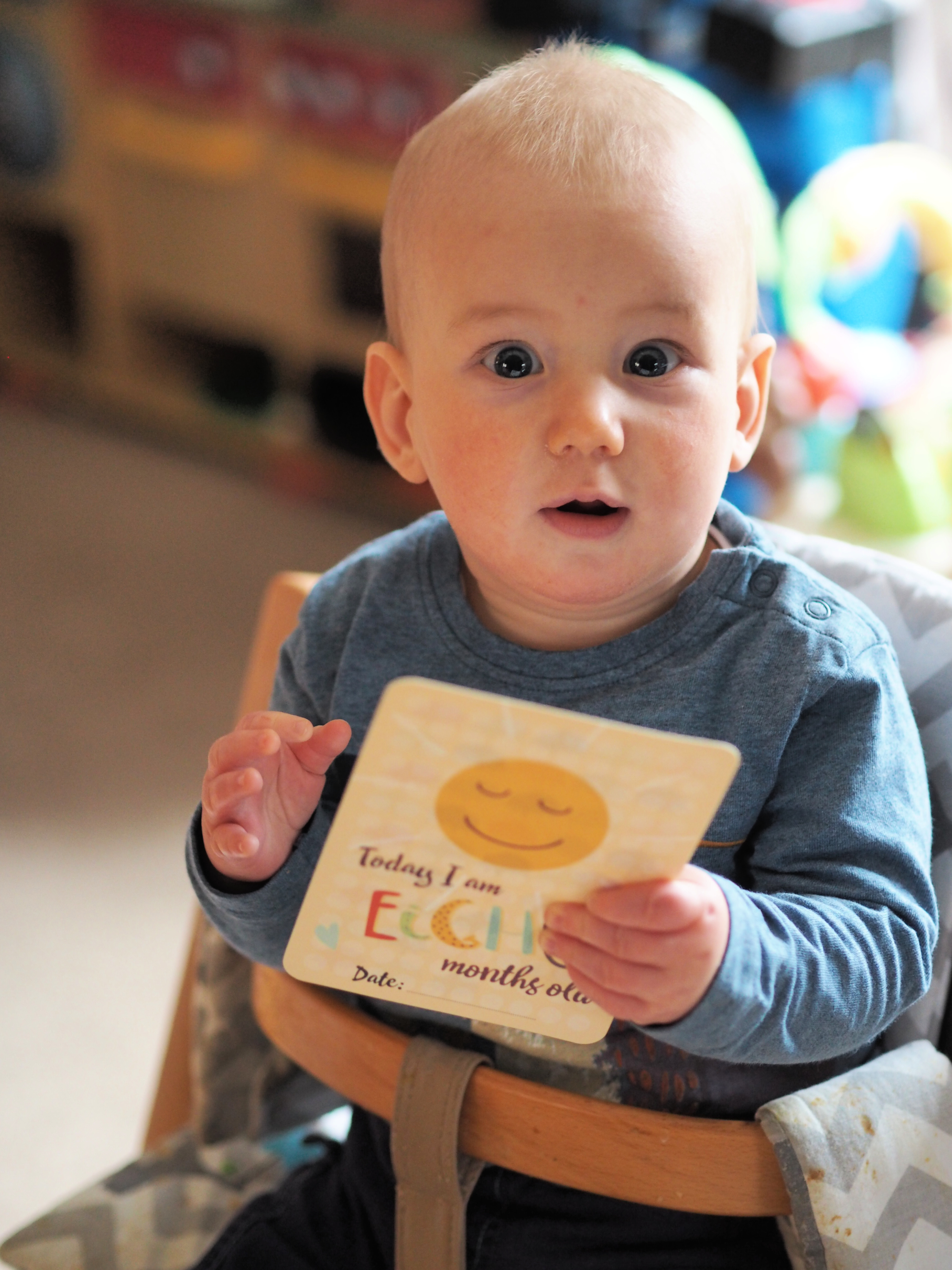 Bodhi turned 8 months on Monday. January may have been grey for most of us, but not so for Bodhi. Who, other than the odd off-day when he’s been teething is always full of smiles. January has seen the arrival of tooth number 2 and 3 which did cause some sleepless nights and unhappiness and meant he was off his food for a few days, but other than that he really is such a happy soul. Bodhi now has his two front bottom teeth and his top left front tooth.

Weaning is still going well and he is really enjoying it. His general food routine at the moment is ready break with fruit puree for breakfast followed by a breastfeed, puree (lumpy) dinner at lunch followed by yoghurt, fruit, a baby biscotti, scotch pancake or something along those lines, followed by a breastfeed. Then a breastfeed after the school run. Tea is half a round of sandwiches, often with finger foods and then fruit, rice pudding or a yoghurt or a combination. A breastfeed before bed at about 6.30 / 7 (which is usually a big feed and cuddle) and then a bottle with his Dad around 10/11pm.

I’m currently trying to work out if he might be allergic to banana as he had a load of it when my husband was away one night and threw up all over his cot. This isn’t the first time I’ve suspected it may have irritated his tummy. So I need to do a retest, but have been waiting for my husband to be here to help me in case I need help with the fall out!

Development wise, he’s nearly sitting but not fully there. I think part of this is because he is so desperate to crawl! Every time I put him in the play nest to practise his sitting, he rolls straight away onto his front trying to escape it and trying to crawl. At the moment he can get up on his hands and knees and do a rocking motion, so I suspect by the time I am writing you a 9 month update that he will be there. We had a couple of naps last week where I put him down and he spent most of his nap time in his cot trying to do it. He is very, very determined! I also have a strong suspicion that when he is, he is going to be into absolutely everything, he’s already a so and so for trying to grab at things when he’s sitting in his bouncer or when I’m holding him.

He’s pretty much in all 9-12 month clothes, other than the odd pair of trousers – he has a very long body. I have totally given up in putting him in baby gros as he keeps escaping them or getting himself in a total pickle and getting his legs or toes trapped. So I have bought him some pyjamas instead and he seems much more comfortable.

Vocally Bodhi has really started babbling now. We’ve Got ‘Mmmmmm Ma’ “Ba, ba, ba, ba’ and a little ‘Da, da, da’. He’s learnt how to make kissy noises which are so cute and how to clap. My next mission is to teach him how to wave and do a high five. He still completely loves to be standing up, although I have to hold him under his arms to support him. When we go to baby sensory classes I sometimes have to wrestle to get him to sit down for the activities as he refuses to bend and just wants to stand and watch everything.

This month Bodhi also got to see his first ever snow. He did not know what to make of it all when he first saw it and his eyes were like saucers. You can see the video of it from my Facebook page.

That’s it for this month, he seems like such a big baby now from his newborn days and we can see a personality full developing. Let’s see if he cracks that crawling in the next four weeks!