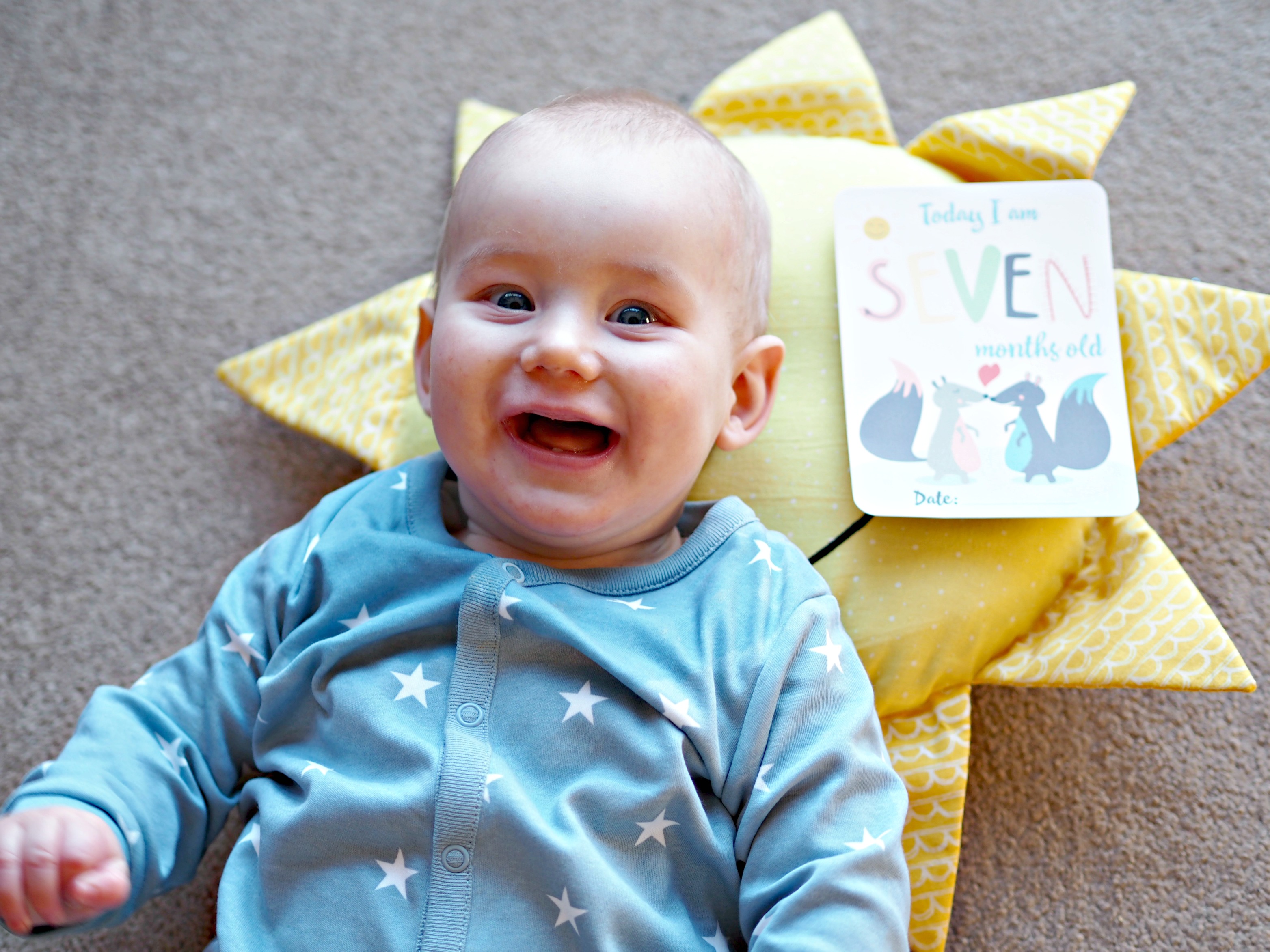 Last Friday, Bodhi turned a whole 7 months. 7 months with this gorgeous boy in our lives and of course, we have now celebrated his first ever Christmas. When I last wrote an update about Bo last month, he was having troubles with his stomach and weaning after suffering from a stomach bug. In the end I took him to a clinic to see a health visitor and have a chat as it seemed every time I re-introduced solids it just upset his stomach. On her advice, I put Bo on probiotic yoghurt for 24 hours and breastfed him and nothing else, as she believed the stomach bug had stripped his stomach of all of its good bacteria. This worked a treat, I just bought plain natural yoghurt and mixed in little fruit puree, and after that we able to progress with weaning and he is now on 3 solid meals per day and doing really well with it.

Sadly, that wasn’t the last of Bodhi’s poorly woes. While his first Christmas was lovely, unfortunately the weekend before Christmas he started to feel poorly with what we thought was a cold. However, by Christmas Eve he had a temperature of 39.5 and was not really drinking. I ended up syringing water into him which caused him to throw up all over our bed. Christmas day and Boxing day he was very up and down with a high fever and completely off his food, although he would breastfeed. I took him straight to the doctors on the 27th when he woke up with yet another temperature where he was diagnosed with tonsillitis and given a course of antibiotics. Thankfully after a couple of days of that he was so much better and has now fully recovered. 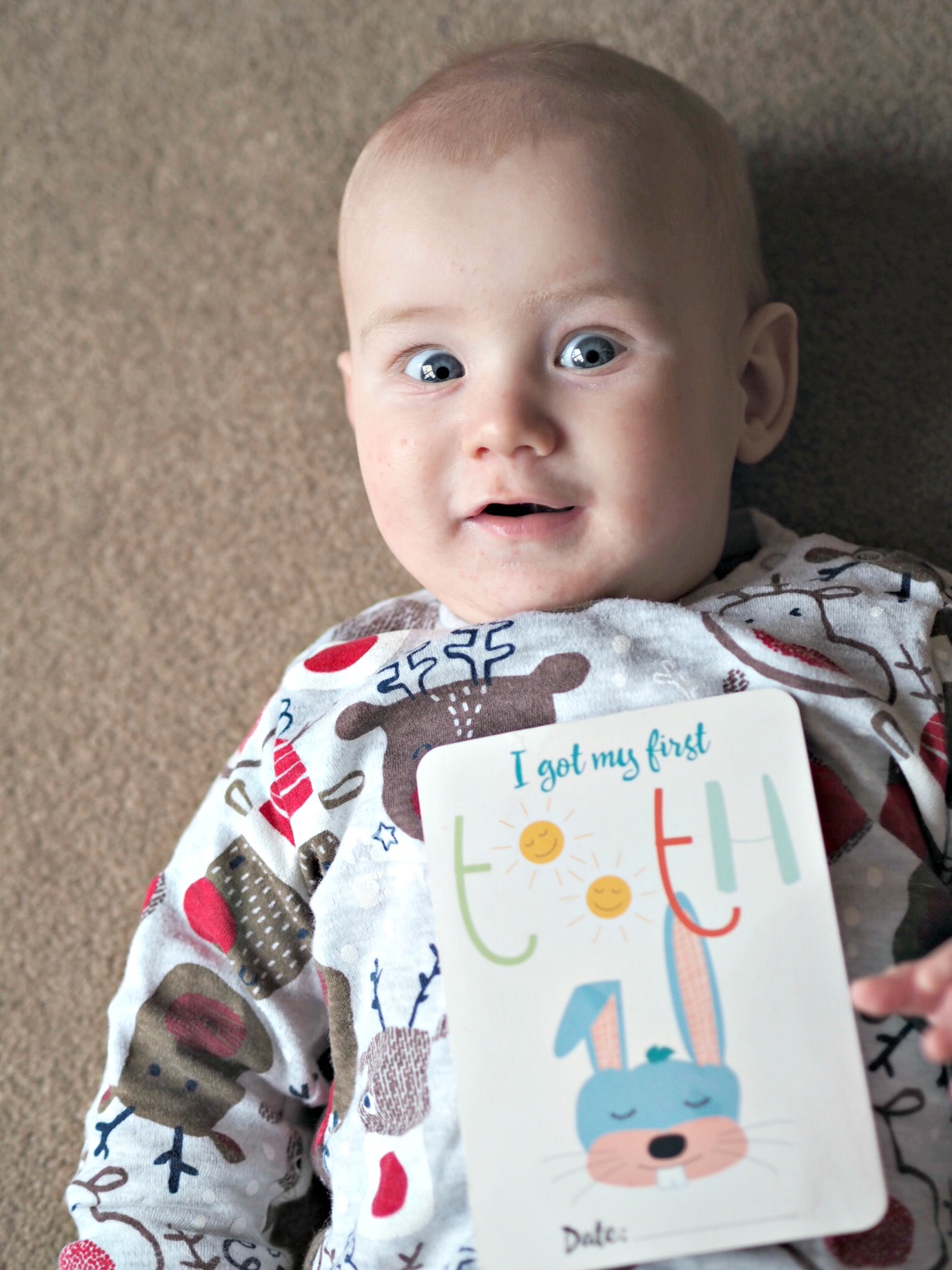 December saw the arrival of Bo’s very first tooth. Which kind of took me by surprise, because although he had been a bit drooly he really hadn’t been too bad at all, and I discovered it when he decided to attempt to gnaw on my finger. Since then we have had a couple of bad teething moments so I am expecting more soon(ish).

Bo is in-between 6-9 month and 9-12 month clothes now with a lot of the smaller size being too small. I may have to move him out of baby grows and into pyjamas as he has this habit of pulling his legs out and the crossing them and getting them stuck in the body section and it’s often several times a night and is driving me a bit potty. Which is a shame as he got quite a few new ones for Christmas! I may persevere a little longer, but suspect that maybe babygros just don’t work for him. He even manages to do it in the smaller sizes too.

He’s so expressive with his eyes and face and is very vocal. He is definitely trying very hard to say ‘hello’ and over the last week he has started saying ‘Ma’. He’s my only child to say Ma before Da, I suspect it’s because his older siblings are always saying Mummy/ Mum. He has a wonderful smile and giggle and loves cuddles and kisses.

Bodhi hasn’t mastered sitting quite yet, but he can roll and really loves to stand up (with support under his arms) and I think the jumperoo and his bouncer are his favourite toys. For Christmas he got a light and classic music projector to go on his cot and a musical guitar toy, so he has a guitar just like his Dad and siblings, as well as lots of lovely new clothes and books.

I suspect he’s started going through a growth spurt this last week as he’s started waking earlier in the mornings for food and generally eating more food or fussing for extra breastfeeds. Either that or he is making up for the food he missed when he was poorly over Christmas. Either way he is determined to get into that next size of clothes! I’ll let you know how that goes next month.