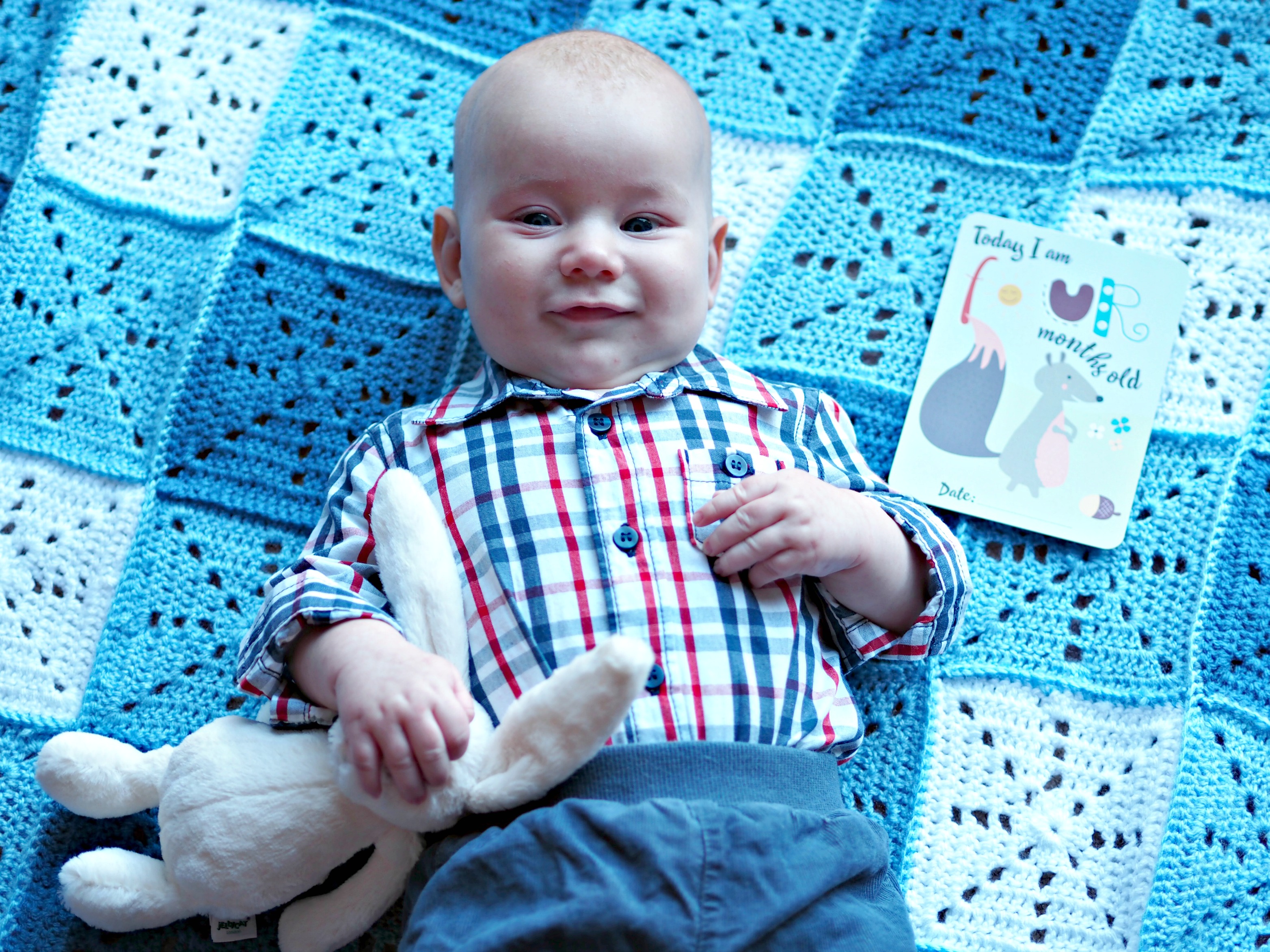 Another month has passed and it’s another month where Bo has continued to grow like a weed. At 4 months he’s nearly out of all the 3-6 month clothes and I am going to get all the 6-9 month clothes out of the loft to wash ready for him to move up into. Half of his baby grows I can no longer do up because he’s just too tall. I’ve never had a baby before that grows out of the clothes before their age, despite having had big babies, they have pretty much stuck with their age, so this is a new experience for me!

Bo’s starting to really get into the rolling thing and can roll from front to back now, has done a couple of rolls back to front (with help) but not fully mastered that way yet. He loves to be held sitting up and look around and I think he will be really happy when he can sit up by himself.

This week we’re going to move him up the rocking crib to a cot bed as he’s just too big for it and I worry about him rolling in it too. We’re lucky in that our bedroom is big though, so he can stay with us until he’s 6 months. I’ve also switched him from the carrycot on the pram to the main pram seat as he’s quite desperate to see the world go by and also nearly too tall for the carrycot. I have been holding on to it as long as I can as I just want to hold onto the little things as he’s my last, but it’s time. Anyone else get sad when they pack up the too small clothes or is it just me?

The Jumperoo or the circle of neglect as a couple of my friends affectionately name it has come out of the loft, it was something Logan loved – I remember buying it with my husband’s bonus when he was small, Aria never really took to it, but that could be related to her reflux. But the very first time I put Bo in it, it is fair to say he was delighted.

Bodhi is still so very prone to over-tiredness and it’s actually something we’re finding quite hard to manage. There are some evenings when he’s so tired and we just cannot get him to sleep or we think we’ve got him asleep and then he shakes himself awake again. He can also be tricky at nap times too. Because of this I am still working out different nap and routine times, my next step is an earlier bed time which will be harder with two older children but I will see how it goes. I have also booked to take him to cranial sacral therapy.

Last week Bo had his 16 week jabs, like the 8 week ones which he was quite poorly after, they contained the vaccines for Meningitis B. The 12 week ones were fine, so I was feeling optimistic about the 16 week ones especially as the nurse said he should be better this time as he’s already had some of the vaccine. Well, I was wrong the poor little guy was so unwell after them. He did have a cold at the time, but as he had had no fever with it and other than being snuffly was pretty much ok in himself the nurse said we should still go ahead. But he was so poorly, his temperature kept climbing and climbing with it even taking Calpol at 4 hourly intervals, so much so I was worried I was going to have to call 111. We ended up stripping him down and lying him on our bed underneath the open skylights to get him to cool down and none of us really slept that night. It took Bo about 3 days to be right again. Better of course than the illnesses themselves, but still not pleasant.

Bo is definitely cooing and practising trying out sounds. I thought I was being an over-proud Mum seeing things that aren’t there because I was sure he was trying to say the word hello – I say it to him all the time – and then I saw my family at the weekend and my Mum and sister heard it too.

We’ve also started Baby Sensory classes which I have done with all of my children and loved, so it’s great to be able to do it with Bo too. It’s also great that he loves it as much as his brother and sister did. My husband goes away this weekend for two weeks with work travelling and I actually think he’s going to notice a real difference when he gets back as it’s just a big time in his development. Amazing but it goes so fast.