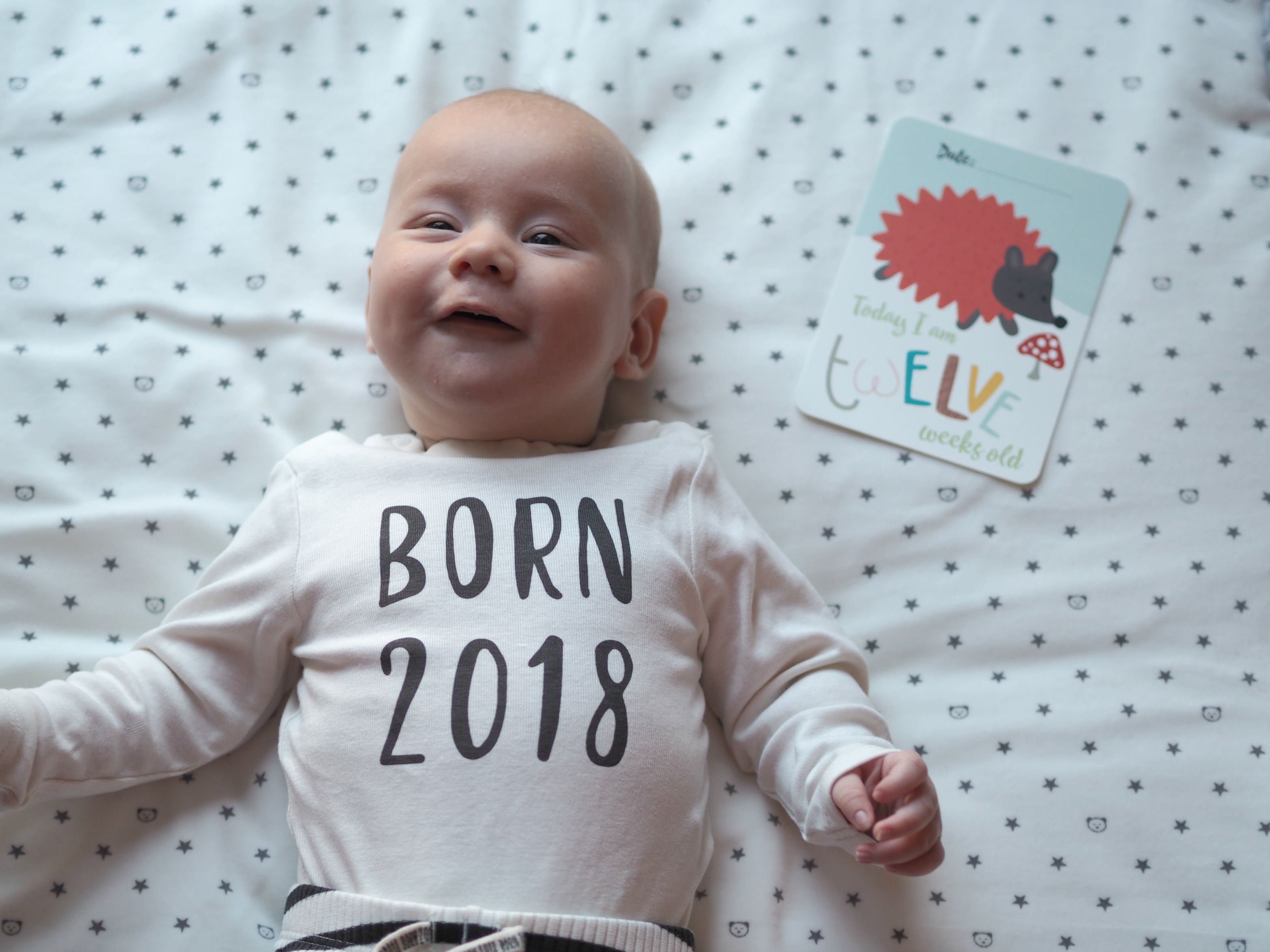 The last 4 weeks have completely flown by, I guess the summer holidays will do that to you! Since I last wrote about Bodhi at 8 weeks, he’s grown and developed at such a crazy rate. We’ve moved from smiling to really starting to get laughing under his belt. His head control is getting stronger, although it’s still not fully there, but the best thing is we can really see his character starting to shine though. He’s more animated, interested in the world around him and really adores his brother and sister and is always smiling at their antics. He’s so much more active and kicks away like crazy when you put him on his mat – sometimes in his cot too!

He’s got so big, despite him being my smallest baby birth weight wise, I think he might be my biggest baby at this age. He’s started to chunk out and gone from looking like a newborn to a more sturdy baby. He’s not chunky really, but he is so long. He’s already in 3-6 month clothes simply because of how tall he is and managing to do the poppers up on his outfits.

Overtiredness still continues to be a problem and something we really struggled with on holiday. Bo just does not sleep very much when we’re out and about as he just wants to learn and see what is going on around him. Which means he doesn’t sleep when he really needs to. If we’re at home he sleeps nicely in his cot away from the rabble of the house, but out and about he takes quick snatches of sleep which is just not enough and then gets himself in a pickle. It’s been a bit of a challenge of the summer holidays in general as I want to take my two older children out and about, we can’t stay in all the time. But at the same time I have to accept that in doing so I may have a very over tired baby who just won’t settle very well when we get home. We’ve been trying to compromise and leaving after lunchtime so can come home for an afternoon nap.

I have been trying to work on a routine with him, it’s not perfect. But I aim for 3 naps per day, and down for bed at around 7/7.30pm. It is very flexible at the moment and I suspect it will become more established when the children go back to school and I work it around the school runs. When we do manage the 3 solid naps he is definitely a much happier baby and sleeps better in the night too. At the moment he has a dream feed at about 10/11pm and the sleeps through until somewhere between 4 and 6am and then back to sleep after that. He still likes to be swaddled and sometimes, especially when he is overtired this is the only way we can get him to nap, and being rocked to sleep which I am hoping to wean him off as he gets older.

We’ve got our 12 week jabs later on this week and I hope they go better than the 8 week ones as they made him quite unwell. He has a temperature for at least 24 hours, and was very sleepy and off his food too.

Bo very much likes sitting up and being part of the action, so I am looking forward to when he has head control so that he can sit in the Bumbo and I especially think he will enjoy the Jumperoo. I’m looking forward to seeing what the next 4 weeks have in store for him.