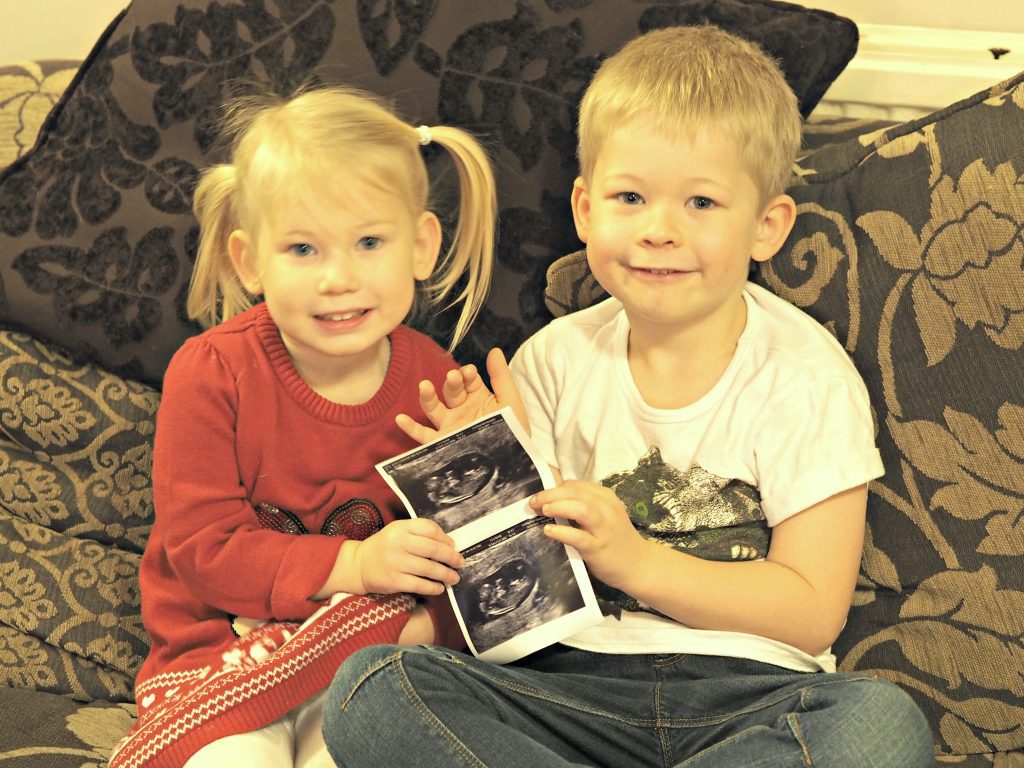 I’ve got something to tell you, and to be frank I think it’s a bit of a miracle that I have lasted this long without letting anything slip!

There is a saying ‘new house, new baby’ and it seems that our new house decided to give us a bit of a surprise. 5 weeks after we moved in I discovered that I was pregnant.

I was gobsmacked. Completely surprised.

Here’s the thing, over 2 years ago, my husband and I decided that we would like another child. Things happened in the midst, like my gallbladder operation. But nothing happened. So I decided to make my peace with it. I know that I have fertility issues and I also know that I am 4 years older than when we conceived Aria. When it became clear nothing was happening, I decided to be grateful for the life and children that I have. I remembered that when we were trying for Logan I was told I wouldn’t be able to conceive naturally. So to have had two children naturally after all is a blessing. So I decided to be happy with my lot and just decided that it wasn’t going to happen.

Because of this, I can’t say hand on heart that we weren’t technically ‘trying’ or perhaps more accurately was the fact we weren’t using any contraception. But I honestly believed it wasn’t going to happen and began to mental move on with my life and planning next steps of my career after Aria starts school next September. So this is really why I was so surprised. Although I think my husband was in a more optimistic head space than I was.

My periods can be irregular, but it was 44 days since my last period before I decided that perhaps it might be an idea to pick up a test. I was so convinced it wasn’t going to be positive, that I refused to buy the Clear Blue test and instead opted for the Tesco value one.

When I first saw the blue line I thought it was on the test window, not the positive one. I just thought oh it’s just telling me the test worked and then I had to do a double take. Afterwards, when I realised it was positive I just kept pacing and my hands were shaking. I was excited but completely taken aback too.

I’ve obviously had a few more weeks to get used to the idea. This time around I’ve been taken aback at how big I have gotten so quickly. I look a lot more pregnant than 12 weeks. I have also been nauseous and tired than I remember being previously. This could be because I am older, or just that I have forgotten what it was like.

After a couple of weeks we decided to let the children in on our secret. I wasn’t sure how well they would keep it to be honest. I suspected Aria at least might slip, but they have amazed me by not saying anything. Or at least, her pre-school teachers have kept quiet if she has! But they knew something was up and it didn’t feel right not telling them. Logan being the oldest has understood it the most and he’s just so excited. He keeps telling what a good big brother he’s going to be and that he can help me feed the baby in the night. He runs and gives me a hug and says giving you a hug is like hugging the baby too isn’t it Mummy. Aria is excited too but has less of an understanding and is at the moment convinced the baby is going to sleep in her dolly’s cot.

Today we have had our scan and I think you really do countdown the days until your 12 week scan, just to know that everything is ok. I  had become a little concerned that it might be twins (it’s not). Doubling the amount of children we have, seemed like a daunting prospect. But no it’s just one little baby that didn’t stop moving during the whole of the ultrasound so it was hard to get a picture, due early June 2018. Eek!