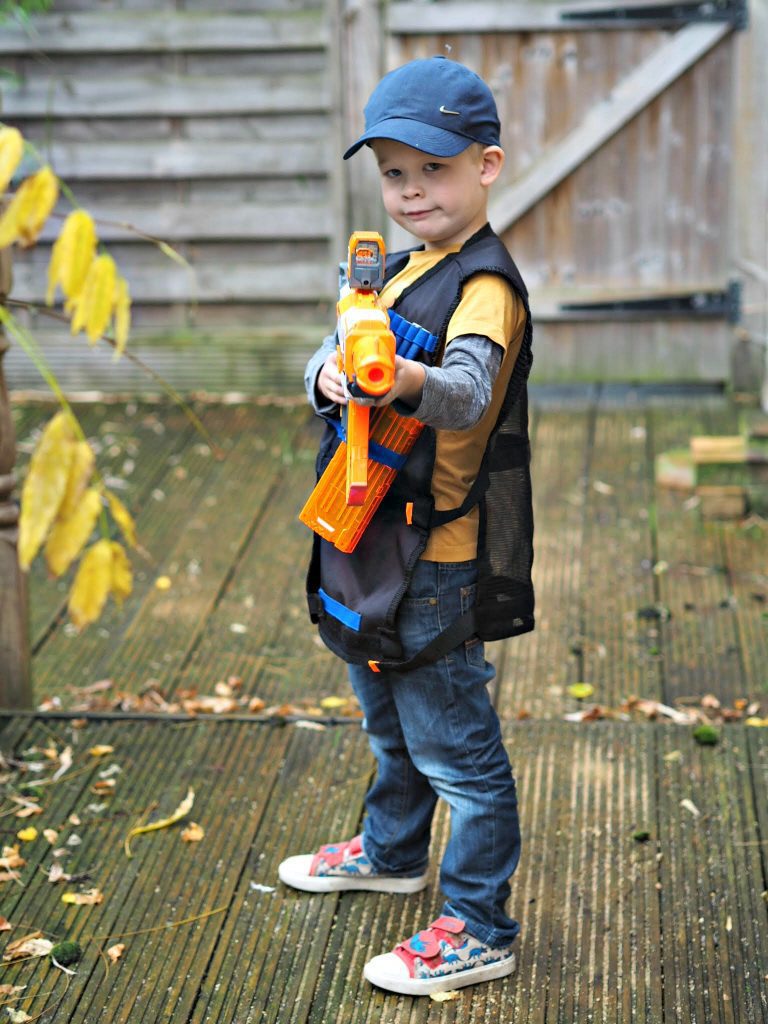 My Son & Guns – Finding a Compromise

Almost two years ago to the date, give or take two weeks, I wrote a blog post on how I felt about my son playing with toy guns. It ended up being quite popular and Mumsnet’s blog of the day.

It was something I was really struggling to come to terms with. Guns are after all created to kill people, so why would you want a child to play with them? At the time I was beginning to realise I was fighting a losing battle, with my son creating guns out or lego and Megabloks – he was finding a will anyway.

After I published my post, several people got in touch with me to share their experiences, and a couple of friends who worked in childcare also sent me to scholarly articles on the subject. I also had a good chat with his pre-school teacher at the time who gave me some great advice.

The general consensus from professionals and even a mother who chatted to me on Twitter, who said she had banned her sons from guns and now they’re grown she wished she hadn’t, was that I shouldn’t stop my son from playing with guns. His pre-school teacher told me that guns are used by children’s heroes and people he looks up to, making them taboo will leave him to feel ashamed and wouldn’t create a healthy view of them.

Armed with this information, I reluctantly agreed for him to get his first Nerf gun that Christmas. Now, my son seems to get really into certain toys at certain times. It’s a real facet of his personality. We’ve had vacuum cleaners (don’t ask), diggers, dinosaurs, Lego, Scoutwalkers (from Star Wars) and now Nerf guns. And when he is into that toy, he is really into that toy.

This birthday it really and truly has been all about the Nerf gun and it was all he wanted for his present. My husband and I chatted about it and decided he could have Nerf for his birthday, but not for Christmas. He ended up getting all sorts from the combat vest, different bullets and a specific gun he saw on Youtube – don’t ask me the name.

Logan was delighted with his gifts as you can tell by his photo. Me? For the most part, I am trying to find my peace with it. There are times I look at him shooting things and I think God I hate you playing with those guns, and then there are times when I see him with his cousins or his Dad having an absolute hoot shooting each other in a ‘Nerf war’ and it makes me smile.

Like with most things parenting, we have rules. No shooting his sister, no shooting me unless I am playing with him, no head shots, no shooting any of the pets, no shooting at the TV or breakable items. He’s also only allowed to play Nerf guns with friends that want to, if they’re not into them then different toys come out. A breaking of these rules leads to an immediate confiscation.

The compromise seems to be working. A lot of the time now I can see the innocent fun he is having, rather than thinking argh you are playing with an instrument of death. I am hoping at some point the obsession will ease and that letting him play and not making the toys taboo will help my son grow up in a balanced way. Could I do without finding sprays of Nerf bullets under my coffee table, sofa and behind the curtains? Of course. But it just sits alongside the Lego anyway.

3 thoughts on “My Son & Guns – Finding a Compromise”