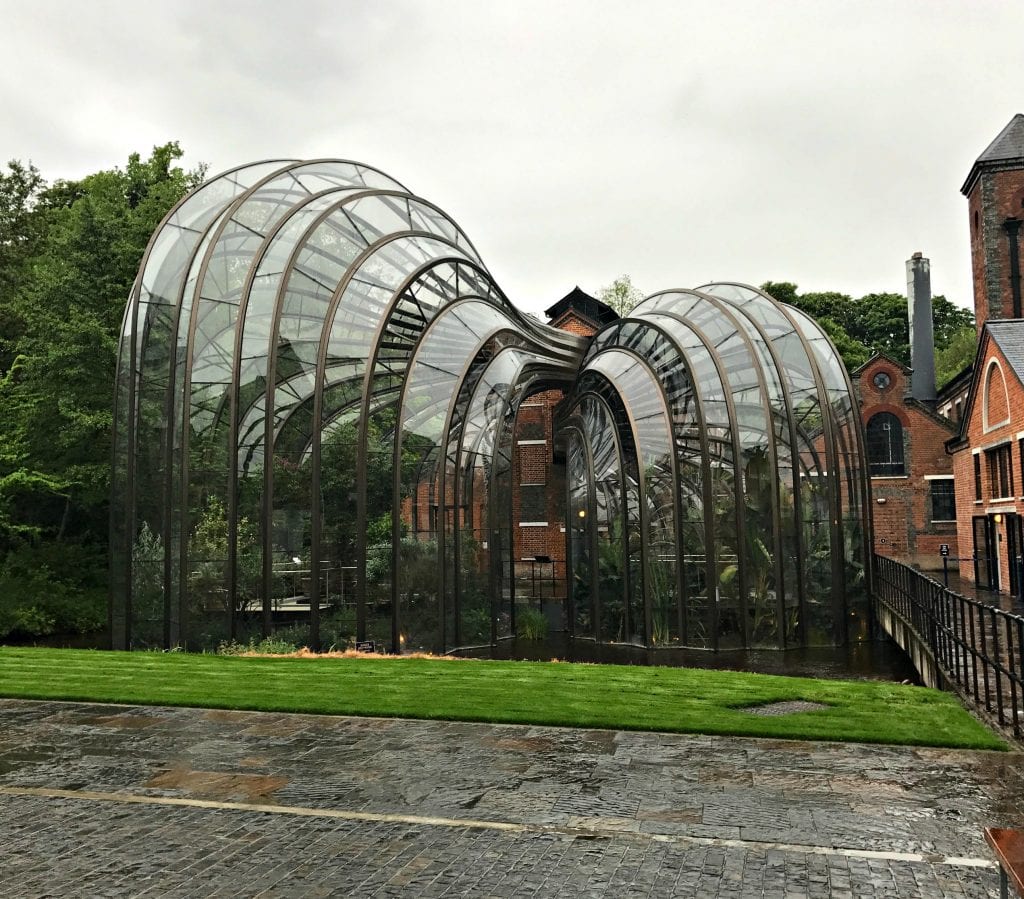 This week I’m reviewing the Bombay Sapphire Distillery Tour in Laverstoke, Hampshire which is about 15 minutes out of the centre of Basingstoke. This is perhaps a little off my normal type of article however it appealed to me as someone who loved food and drink and also (that darkest of secrets) my love of engineering stuff. The distillery is a simple proposition, £15 gains you entry to the customer facing aspect which includes a guided tour of the distillery and a drink in the bar at the end.

The distillery is based in Laverstoke Mill which previously housed a paper mill on the river test. Although the external features of the mill (which seem largely Victorian) have been retained, the buildings have been extensively re-worked within. One of the more interesting features for me was, how the mill itself and the distilling process have been adapted to be of maximum energy efficiency and minimal environmental impact. These adaptations range from the reselling of waste alcohol for use in industry, right through to the insulation within the buildings themselves to waste minimum energy.

The first part of the tour is non-guided and surprised to find it was a relatively recent entry into the gin market. The next stage of the visit was the amazing glasshouse built as part of the renovations. The purpose is to show off the various plants that are used to flavour the gin. This is of less interest than the glasshouse itself which is a magnificent dali-esque eruption from the side of an otherwise ordinary brick building.

The final non-guided section of the tour was an opportunity to smell the various flavours used in the gin production. At this point the staff handed out cards with the idea being that when a flavour proved appealing the appropriate number on the card would be punched. Once this exercise was completed the card could then be used to work out our ideal gin cocktail. Being a non-drinker this was a little pointless but it did tell me which of the two available virgin cocktails I’d like best. It was quite a lot of fun smelling the various flavours, some of which were utterly disgusting.

The final part of the visit was a guided tour of a small distillery. Bombay Sapphire have a large industrial scale distillery in the private section of the site but maintain two original copper vessels to show the public round. I won’t get into the detail other than to say this was probably my favourite bit of the museum. A long time ago in a galaxy far far away I was a mechanical engineer and so finding out how Bombay steam distill the gin was super interesting. It’s obvious the two copper kettle type stills were retained as they look like what the public think a still looks like (as opposed to the industrial ones which look like any other chemical processing equipment), but they are working stills and follow the same process as the main set up.

Once the tour is done it’s on to the bar for the ‘ideal’ gin cocktail or virgin cocktail in my case. The bar itself is a nice environ and my colleagues who do drink said the cocktails were pretty nice. My mocktail wasn’t the best I’ve had but was definitely upper echelon.

So, was it worth the money and time? Yes, I’d say so. Initially the entry seems steep at £15 but the distillery is very engaging and the price includes a nice cocktail which I’m sure would account for at least £5. If you choose to have a mocktail then you get given a Bombay Sapphire miniature and a bottle of Fever Tree tonic so no-one misses out. Laverstoke is probably a little way off the beaten track to visit unless you’re in the area, but if you happen to be in Hampshire (and it’s a beautiful place) Bombay Sapphire is well worth a visit. There are a number of local pubs in which to enjoy a nice meal afterwards.