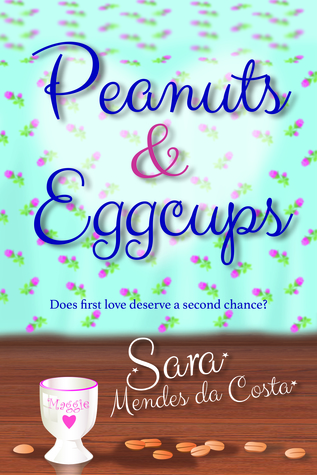 Peanuts & Eggcups is the debut novel of Sara Mendes Da Costa. Who, as a side note also happens to be the voice of the talking clock. It is in what I would class as the ‘chick lit’ genre and first one I have read in a while. The story centres around Maggie and her twenty something friends. The book starts with Maggie trying to decide whether to attend a school reunion. The big issue being her high school love Luke will be attending, who she hasn’t seen since one fateful night.

The story is light, funny and while Maggie isn’t a perfect heroine. She makes mistakes, she’s not totally sure what he wants in life and there are more than a few times I wanted to give her a big shake. But she is fun, caring and very likeable.

The premise of the story is about Maggie attending the reunion with the hopes of meeting her lost love, but in fact bumping into his suave brother instead. But actually what it is really about the lives and loves of Maggie and her friends too. I enjoyed the dynamic between them all, the adventures and self discovery each goes through and the obvious affection they have for one another.

I do have to mention is that this book is over 700 pages long, and if I’m being honest a bit too long. The beginning of the book is really slow, and the pace really took a long time to fully establish itself. I’d start to really get into parts of the story and then it would slow down again and pick up again and repeat – this was quite frustrating. There were also too many sections where we found out what happened after the event rather than living it along with the heroine. Which I wasn’t a huge fan of. But (this is a big BUT) when the pace got going and I would say this would be about 60% in, I thoroughly enjoyed it.

This is the author’s debut novel, and I actually wonder when she originally started writing it. If it’s one of those books that she had been writing for years as there were odd things that made me think it may have actually been written ten years ago, rather than more recently. For example, Maggie’s discovery of hair straighteners. It was like it was quite a new technological development rather than something that’s been around for years. Even if she had never purchased some herself, trust me as the owner of naturally wavy hair, hairdressers always want to use them on you. Then there were other small things like Maggie wearing a hipster belt and Maggie getting delivery reports on her mobile. I don’t think I’ve got delivery reports since one of my Nokia phones. It didn’t affect my enjoyment of the story, but it made me curious.

My last comment is on the ending. We do of course get the obligatory happily ever after and nearly all of the characters do. It was also a lovely ending, but it was just too short! After 700 pages of build up, I felt robbed of at least one last chapter where I got to revel in the happiness and find out more about how Maggie enjoyed living it.

A fun, light hearted book. It would have been so much better is some of the sections had been a bit shorter, for example the beginning reduced which would have improved the pace and the ending a teensy bit longer. But all in all, a fun summer read.

*Disclosure: This book was sent to me for the purpose of this review, however, all opinions are my own.