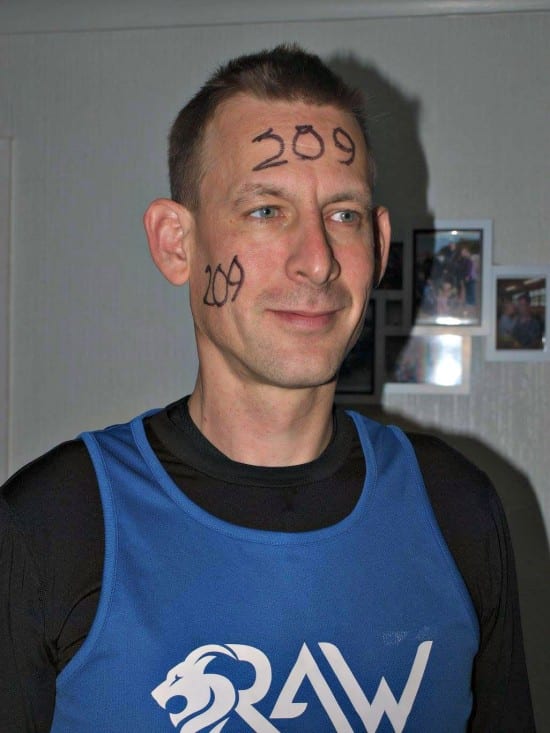 I know this is the second consecutive post I have done on the Tough Guy obstacle race, but this is the most important race event of the year for me and kit choice, I think is crucial. Last year for my first Tough Guy I made a number of mistakes which meant that I was pretty much a zombie when I crossed the line. This year I wanted to finish in less time and in a better state of mind. So the first thing I needed to do was look at what went wrong last year. I made two huge errors of judgement, I underestimated how much of a toll 3 hours running and climbing obstacles takes in terms of sheer energy, and I massively underestimated how punishing the cold would be. Last year Tough Guy was not that cold, there was no snow on the ground. In previous years runners had to break ice as they went through water sections. So I was not prepared for what happens when you are wet through and the wind hits you at the top of one of Tough Guy’s massive obstacles. The result was hypothermia and it was not fun. This year I decided to structure my kit around staying fuelled up and warm. Here is the run down.

Tough Guy is a quagmire and so you need good fell running shoes (not trail), with huge plastic lugs to drive you through the clag. I train in trail shoes but my race shoes need to be heavier duty. I chose the Inov-8 Mudclaws as, in addition to the hardcore grip they have a 3mm heel drop as I was moving towards barefoot running when I bought them (more about that in a later post). I would not be without these, however dry it is, by the time 5000 runners have gone through, the ground is like the Somme and so you need something extra, these are 4 wheel drive for your feet.

Tough Guy gets you wet early and then lets the wind cut you to ribbons. Having felt this last year I knew neoprene was the way forward. I looked at neoprene vests and shorts but was put off by the cost. In OCR you have to be prepared to destroy kit from time to time so spending lots is not always wise. I found a 2mm shorty wetsuit on Decathlon for the princely sum of £12.99 (it’s gone up now), which was cheaper than any combination of shorts and vest I had found. I was concerned about running in it at first and it is a bit weird. I would recommend getting used to doing big distance runs in your wetsuit before racing in one. If you can, do one wet as the weight of the wetsuit increases dramatically. This worked like a charm and kept me fully toasty. The long front zip meant I could drop it to let in some cool air after the notorious hill slaloms. Even though it was much warmer this year I was very pleased how this turned out. I had tried it two weeks before at Muscle Acre (where we did deal with copious snow and ice) and it was super toasty. 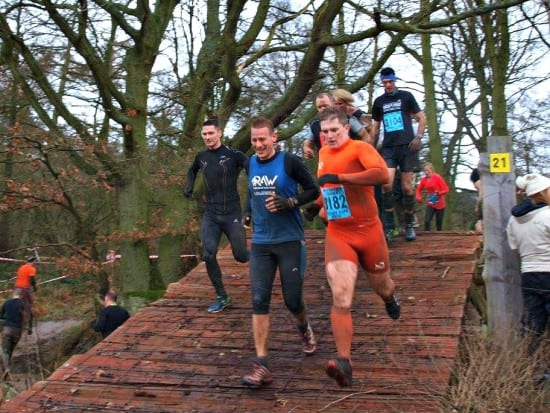 My personal bete noire at Tough Guy is the hill slalom but the obstacle that often does most damage is the underwater tunnels, a series of immersions in ice cold water. Last year this was probably where the hypothermia started. Top athletes such as James Appleton recommend hats for this reason so this year I tried it out. I went for another Decathlon bargain here and it performed admirably. I knew I’d be too hot on the running sections before the killing fields wearing the hat so I carried it (next item). I was in two minds as to whether to put it on right up to the tunnels but as soon as my head submerged I was glad it was there. The neoprene made the fit close and natural and kept my head super warm. I may have looked stupid but this was a total game changer and will be a staple for me from here on in.

There are a number of tools runners can use to carry kit, from endurance vests, through hydration packs down to small belts for phones. I needed to run light and to have something that carried key kit without getting in my way over obstacles. I chose an SPI belt due to the positive reviews it gets and went for the Endurance model for three reasons. The pocket is larger and it needed to carry my hat, it has loops for energy gels and it has a wider belt with heavier duty fastenings. This was the piece of kit I was most dubious about as I was sure it would get snagged or ripped off. It performed brilliantly. The pocket held the hat with ease and I got 4 energy gels in the loops (it could have taken 6). I did Muscle Acre in it to test and then Tough Guy with it fully loaded. There was gel still left in the loops at the end, nothing had departed during the killing fields. This has now become part of my regular kit as it fits a phone and a hotel key just nicely when I run on business travel. I cannot recommend this enough, it’s harder wearing than smaller belts without the faff of a full on vest.

Aside from the cold, I knew I would also have to look at fuelling. I am not an elite athlete and so Tough Guy takes me a long time to run. This year I knew that some sports nutrition at the right time could make a big difference. I chose SIS energy gels simply because Amazon offer a 7 gel variety pack for just under a fiver, which seemed like good value. I can’t really say what they tasted like other than ‘sweet’ but I did notice that I had good energy throughout the event. What I didn’t want was anything peaky as there’s an inevitable crash or anything with caffeine in as it kills the stomach. These were perfect. Even at the end I felt I felt I had gas in the tank.

So there you go, that is the kit that worked for me at Tough Guy this year. The downside is that I cramped really badly so I need to look into what caused that and how that can be addressed next time, I’ll report back this time next year on that. Happy running.