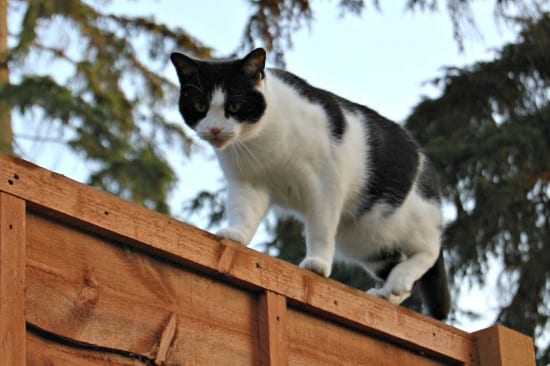 On Monday, we said goodbye to our lovely and gentle cat Farley. I still can’t believe he’s gone to be honest, it all happened so quickly. If you’ve never had a pet before, then I suspect this post will pass you by, but if you love animals as much as we do, you will understand just how sad we are about his departure. He may look like just a moggy to you, but to us he was so much more.

To understand how awesome Farley was, perhaps I have to take you back to the beginning. To 2003. My husband (then boyfriend) and I had just bought our first flat with a teeny garden, neither of us had ever lived in a house without pets and both really wanted one. We couldn’t get a dog, simply because of the size of our place, so decided on two kittens.

Now you see I have a thing about black cats and one of them was a beautiful black female cat, we were told we could have her, but if we took her (as quite a few people wanted her), then we had to take the runt of the litter. The runt turned out to be Farley. The cat that nobody wanted was the best cat I have ever known. Sadly, we lost Cleo a year later in a car accident, but since we brought him home Farley has become our fast and loyal companion. We have had other pets in the interim – we rescued another cat Merlin who sadly got cancer and left us in 2012 and Boris the dog who we re-homed at 7 years old and went over the rainbow bridge in 2013. Farley has been with us through two moves, our wedding, numerous ups and downs and the arrival of two children. Actually bar about 8 months, he has been with us nearly the whole time my husband and I have lived together. Our home seems strange now without him. 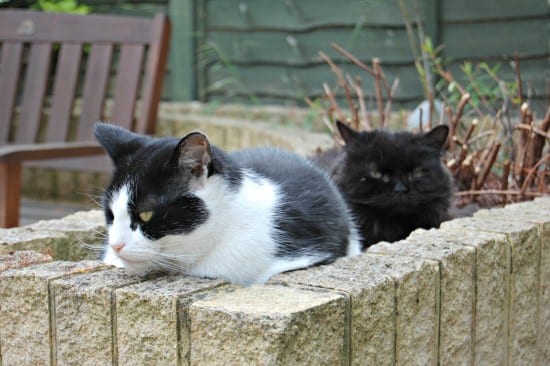 We were quite young when we go him – I was just twenty-three, so we were known to throw parties etc at our place and many of our friends have fond memories of Farley coming into to cuddle up to them the next morning as they recovered from their sore heads. Or waking up and finding him tucked up next to them purring away on their sleeping bags.

He was like a happy purring, cuddly teddy bear always wanting to just curl up and be stroked. Everyone that has visited us within any regularity knew and had a soft spot for Farley. A friend we haven’t seen for years came by quite recently and was delighted to see Farley scooped him up and snuggled him.

Whenever were sick or going through hard time it was like he knew and he would be there, pressing himself against you with a purr.

It was however, a different story when he was out and about. Then, well then, he liked to rule the roost and there has been more than one occasion when I have had to call him in for fighting and he has had at least three abscesses treated on his face for cat fighting, the little so and so. He was also fond of bringing back ‘gifts’, the worse being an actual bat.

He was also a monkey for food theft. I say this with a smile. We could never leave meat defrosting on the side and cake, he’s been known to rip his way through all sorts of packaging to get to cake. Can’t say I blame him.

Some of my fondest memories of him have been him with our children. If you read this blog, you will probably know that it took us a long time to conceive. Almost as soon as I was pregnant with my oldest, it was like Farley knew. He normally always sits on my husband’s lap, but as soon as I was pregnant he became obsessed with me and my tummy. He would curl around it and purr. So much so that towards the end of my pregnancy I actually couldn’t bear it as he would try and sit on my bump.

That was the beginning of a love affair, Farley fell in love with my son. I actually don’t think I need to say much, as these photos simply say it all.

He equally welcomed Aria into the fold, although I have to admit his deepest bond is with Logan, perhaps because they have spent more time together. But he was always amazingly kind and patient with the children and if they ever crossed the line, on the rare time he hit them he would keep his claws retracted and just gently tell them off with the soft pads of his paws.

Farley, I cannot believe you are gone. I have tears in my eyes as I write this. You were a blessing in our lives and we will not forget you. I imagine you now over the rainbow bridge eating cake and meat tit bits, cuddling up to your furry friends that have left us already. Thank you for being a part of our lives.

40 thoughts on “Goodbye Farley Cat – You Will Be Missed”