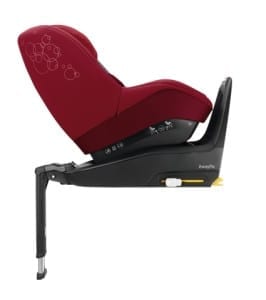 My daughter is fast approaching the age where she is going to outgrown her newborn, rear facing car seat and it will be time to move up to a toddler sized seat.

It’s alright though, she’s my second child I have the next car seat sitting and waiting. Or so I thought. We didn’t go cheap on it either knowing we hoped to have more children we went for a good quality option so that it would have longevity.

But… the problem is, it’s forward facing.

The laws have changed and they are all a little confusing. But the basics are that you should now keep your child rear facing until they are at least 15 months old. You can read more about it on Gov.uk. My daughter’s car seat goes up to 13kg so she might just make it, although she is tall, if slim so there is a good chance she might be too tall by this age. But my original plan had simply been to transfer her to her brother’s old forward facing car seat when this happened.

However, I have started to so some research on rear-facing car seats and what is behind this new change in child car seat legislation.  I have to say, it’s really given me reason to pause and consider what it the right thing to do.

For example, extended rear-facing car seats are five times safer than forward facing. Extended rear-facing means keeping your child until they are almost four years old rear-facing.  Five times that’s a big number. What’s the risk? Frontal collisions apparently. With the big risk being to the child’s internal organs such as the heart being crushed, damage to their spine and worst case the child’s neck breaking. You can read more on Rearfacing.co.uk.

Some scary facts and figures right there.

I try to argue it away with, forward facing was good enough for my son, why shouldn’t it be for my daughter? But the fact of the matter is, I didn’t know any better with my son. A friend talked about it a bit, but the seats weren’t even available to buy in the UK, so we dismissed it. But, I know in my heart, if I had known what I do now, I would have bought my son a rear-facing car seat. I know I would have.

Money is a huge factor too. If you look at the price – you can get a budget rear-facing for about £130/140 or if you go for an ISOfix one which I am a huge fan of (and what our current forward facing toddler car seat is) then you’re looking at £300-400. That is a phenomenal amount of money, especially when we already have a usable car seat sitting and waiting and we have also just bought my son a bigger one as he’s outgrown his. Our savings are rapidly depleting!

I can’t help but be a bit resentful that car seat companies who have already made a lot of money out of me as a parent, will be cashing on this new development. But the fact of that matter is, your children are your most precious gift. You can’t put a price on safety can you? When my husband and I have discussed this, we keep going around in circles. Yes we have a very good forward facing car seat, but we would never forgive ourselves if something happened to our daughter because we were worried about the money. We’re still deliberating and I suspect we will be right up until the time comes to move my daughter up to the next size car seat.

Tell me if you are in the same position as us what are you planning to or have you done about extended rear-facing toddler car seats?