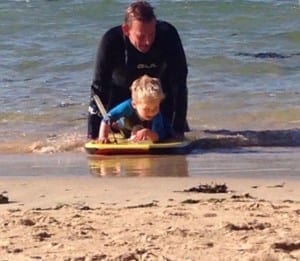 I like hobbies. I’m sure my wife would tell you that perhaps I like them a little too much given that most of my hobbies tend to require expenditure of various scales. Whether it was weekend long clubbing expeditions in my 20s, to huge record collections and mountain bikes in my 30s, my hobbies all have 3 key features. They must be time consuming, hobbies that can be done quickly are as pointless as nude radio. They must involve significant and regular expenditure on new items which will never be referred to as anything other than ‘kit’ and they must be entirely opaque to my better half. Hobbies are truly pointless if they don’t afford the opportunity for some top quality Ben time.

But 3 and a bit years ago my life changed fundamentally. My first child was born. There never was a conflict within me in terms of how to spend my time once he arrived. Just as a lady may experience a biological shift to make her better at making cakes and soothing bruised knees (frankly I don’t know, I’m not a lady but something happens) I felt an unexpected shift too. I didn’t want to go out anymore, basically.

The influx of parcels of carbon fibre and vinyl to my desk at work stopped. I would no longer wear lycra (many were relieved) and for the first time ever, it was quite obvious what I was doing to everyone, even the wife.

I could have carried on like that forever, frankly. As far as I’m concerned the very best use of my time is spending it with my kids, but that avoids one of the most important aspects of fatherhood to me, teaching your kids how to live their life as an adult. What my son sees me do now will be his blueprint for how to behave should he have kids of his own. He may not do the same or even similar but my example will be his starting point.

The truth of the matter is, however worthy any one thing is a successful life is based on balance, Fatherhood is not about giving up any one thing but rather gaining lots more. I realised that by spending every free moment with my son, I was doing neither he nor I any favours. It was with a heavy heart I wheeled my bike from the shed and took off to the forest for a Sunday morning ride. Ten minutes into the first descent I was reacquainted with everything I love about bikes (not the first climb, only perverts like going up hill) and I realised what I’d been missing.

I decided then and there I must always make some time for myself and to use that time well, the key is to focus on ‘as well as’ and not ‘instead of’ time with the kids. So I try and make the best of the time I have.

My family, as a rule, tend to like lazy mornings so right there I have a couple of hours on a weekend where I can go for a ride or mix some records (digitally, my daughter seems to think she needs a room so my record storage has long since gone). We have a dog who needs walking, so on the weekend I combine my run with the dog walk. Most of all I look for hobbies that I can do with my son. I’m lucky, he’s at that age where he wants to do everything he sees me doing, so gardening is no problem, other than when he decides to do a bit of solo weeding, and cooking is a veritable joy.

I see a lot of Dads who give up their interests when they have kids, and if they’re happy more power to them. I also see Dads who seem to invest even more time in their hobbies than ever before when the kids come along. What I’ve learned in my own life, through a careful, scientific process of making mistakes and paying dearly for them is that my life is best when things are in balance, so I love my hobbies as much as I ever did (less kit buying though, kids cost a bomb).