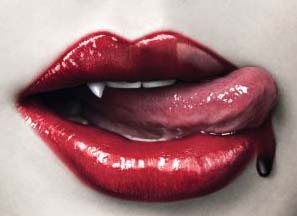 If I were to say the word twilight to you, unless you’ve been holidaying in the Himalayas these past couple of years, you’re not going to think of that strange time of day that’s neither dark or light. No, you will think of vampires, Stephanie Meyer & Robert Pattinson.

In fact, it would seem the whole world has gone a little vampire crazy. And they’re not alone. Witches, warlocks, werewolves and in one instance even magical weather wardens. We just can’t get enough of them.

Over the past few years my poor book shelf has become heavily laden with every supernatural hero or critter I can get my hands on. My appetite for this genre is pretty insatiable.

Personally, I like to think I’m ahead of the crowd. My love began when I was about ten, with the calamitous adventures of Mildred Hubble, Jill Murphy’s ‘Worst Witch.’

So, what fascinates us about the supernatural?

I think noticeably it’s been updated. We’re no longer talking about Christopher Lee with a set of plastic teeth, fake blood and far too bushy eyebrows. The metamorphosis of fantasy into urban fantasy has made the supernatural contemporary. It has woven the impossible into the very world we live in. And with the arrival of David Boreanaz in ‘Buffy’, Jensen Ackles in ‘Supernatural’ and the aforementioned Robert Pattinson, it means fantasy is no longer about old men with long grey beards and cloaks, suddenly it’s sexy.

Let’s face it who wouldn’t want to escape the mundane, saving the world, battling mythical beasts, leaping buildings, and by falling in love with dark, deep, tortured men.

But more importantly, I think the key difference is the role of women in these stories.

Fantasy has finally embraced the feminist movement. Women are no longer simpering and helpless, cowering in fear as Dracula towers over them; they’re strong, brave and in charge of their own destinies.

Let’s look at some older examples. Mary Shelley’s ‘Frankenstein’, notably written by a woman, the main female in this book is the murdered doctor’s wife, a victim. ‘Interview with a Vampire’ where Kirsten Dunst becomes the living child doll for Brad Pitt and Tom Cruise. ‘Lord of the Rings’ the role of women is so small in the books that Liv Tyler’s character had to be specifically rewritten to give the film more balance, and in all honesty even then it isn’t that balanced despite the amendment.

Now let’s take some contemporary urban fantasy women. Buffy in ‘Buffy and the Vampire Slayer’ the only woman that can save the world from the vampires. Elena in Kelley Armstrong’s ‘Women of the Otherworld’ the only female werewolf in existence and then Bella in Twilight. Bella’s an interesting one, on the surface of things you could perceive her to be the simpering female, constantly needed to be rescued which I’ve previously disparaged. However, fast forward to the final battle in ‘Breaking Dawn’ and it is Bella not Edward or even Jacob that saves the day.

The crux of it I think is that while every woman still dreams of their knight in shining armour, when it comes to the fight they want to be next to their man battling beside them, not hiding in the shadows.

Like all things in life, literature and entertainment needs to evolve, reflecting the lives we live. It’s been 92 years since women got the vote and we’ve come along way since. The great thing about the urban fantasy genre is that it empowers women, in some instances making them stronger and more powerful than the men in their lives. But like all good modern day relationships, the balance shifts just enough for us to enjoy the knight moment, even if sometimes we’re the ones doing the rescuing.

My Top Ten Supernatural Book Series (in no particular order, I tried and gave up):

And for those of you interested in my earlier referenced weather wardens check out Rachel Caine (oops does that make it eleven?)